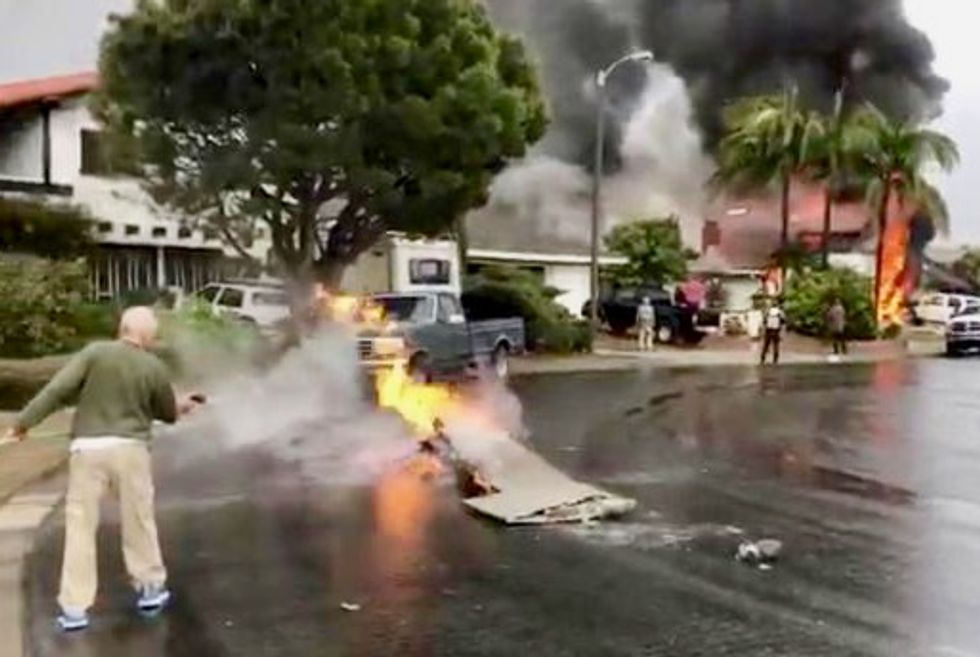 A man puts out fire on a piece of debris from a plane that crashed into a house in a residential neighborhood in Yorba Linda, California, U.S., February 3, 2019, in this still image from video obtained from social media. Joshua Nelson/via REUTERS

A small plane crashed in the town of Yorba Linda in southern California on Sunday afternoon, killing the pilot and four people inside a house the wreck set on fire, police said.

The twin-engine Cessna 414A crashed about 10 minutes after takeoff from a local airport, scattering debris over four blocks in the town and setting fire to a house, the Los Angeles Times reported.

Two men and two women were killed in the blaze, the newspaper said.

Resident Nancy Mehl, 65, said she heard the high-pitched whine of an airplane engine and took cover in her home with her two dogs.

“And then it felt like a bomb went off through the front of the house,” she told the newspaper.

Flying debris smashed through windows and a propeller crashed in her driveway, while a burning wing landed in another resident’s front yard, according to the newspaper.

Police and fire officials evacuated the neighborhood, and police dispatchers say the fire is under investigation.

The National Transportation Safety Board is also investigating the wreck, police dispatchers said. A spokesperson for the NTSB was not immediately available early Monday.

Reporting by Rich McKay in Atlanta; Editing by Raissa Kasolowsky