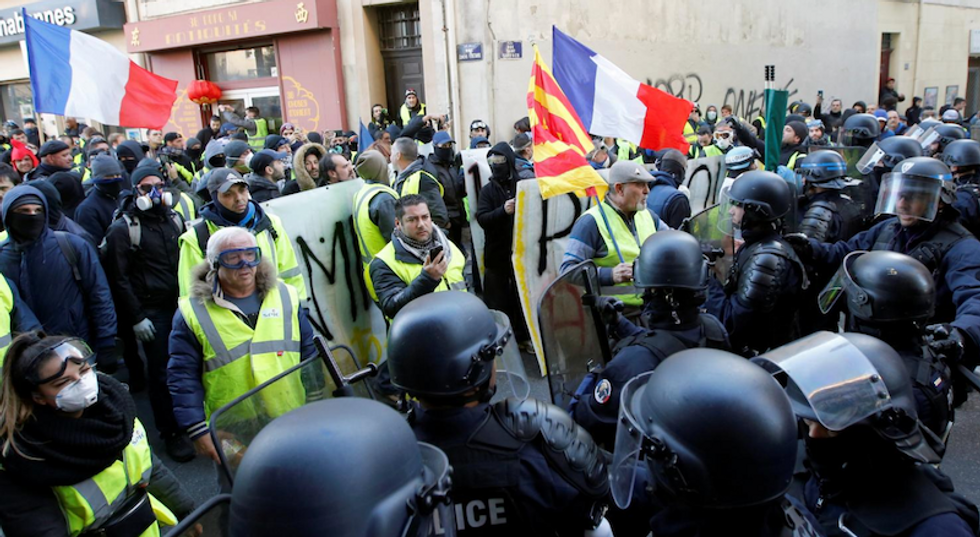 Police officers are seen in front of protesters wearing yellow vests during a demonstration of the "yellow vests" movement in Marseille, France, January 19, 2019. REUTERS/Jean-Paul Pelissier

Several thousand “yellow vest” protesters marched through Paris and other French cities on Saturday on the 12th weekend of action against the government, despite opinion polls pointing to a recovery in President Emmanuel Macron’s popularity.

The protests - named after the fluorescent jackets French motorists are required to carry in their cars - began in mid-November over plans to raise fuel taxes before developing into a broader revolt against the government that mobilized tens of thousands of demonstrators nationwide each Saturday.

The government warned on Friday police would not hesitate to use flash balls in case of violence by demonstrators after it was authorized by France’s highest administrative court.

Protesters in Paris on Saturday paid homage to those injured in the past months, denouncing the use of flash ball riot control guns banned in much of Europe.

Between 10,000 and 13,800 protested in the capital according to police and independent media estimates. Riot police used tear gas to disperse some protesters who set bins and a scooter alight, although the situation remained relatively calm compared to previous weekends. Thousands also took to the streets in cities, including Tours, Valence, Marseille and Bordeaux.

About 1,000 police officers have been injured along with 1,700 demonstrators since the start of the protests, according to official figures.

“It’s true that this intermediate weapon can hurt, but faced with rioters, the police need it to defend themselves against those who attack them,” said Interior Minister Christophe Castaner.

A Harris Interactive poll of 1,000 people on Friday showed Macron gaining 4 percentage points since December taking him to a 35 percent approval rating.

As in previous weeks, protesters on Saturday carried French flags and held signs attacking Macron as out of touch or calling for referendums tabled by citizens.

Protesters injured in previous weeks of violence were put at the front of the protests with some wearing eye patches with a target sign on them.

The Interior Ministry said 80,000 security officials had been mobilized, including 5,000 in Paris.

Just how much does our anger impact our judgments? A recent study found that feeling angry increases a person’s preference for dominant-looking leaders in an election, even when the anger has nothing to do with politics. The findings were published in the journal Scientific Reports. Psychology studies have widely demonstrated that our emotions can impact our judgments and decision-making. One interesting example is that feeling angry during a crisis situation seems to increase a person’s endorsement of punitive and authoritarian measures. This finding may be particularly relevant today, given ...