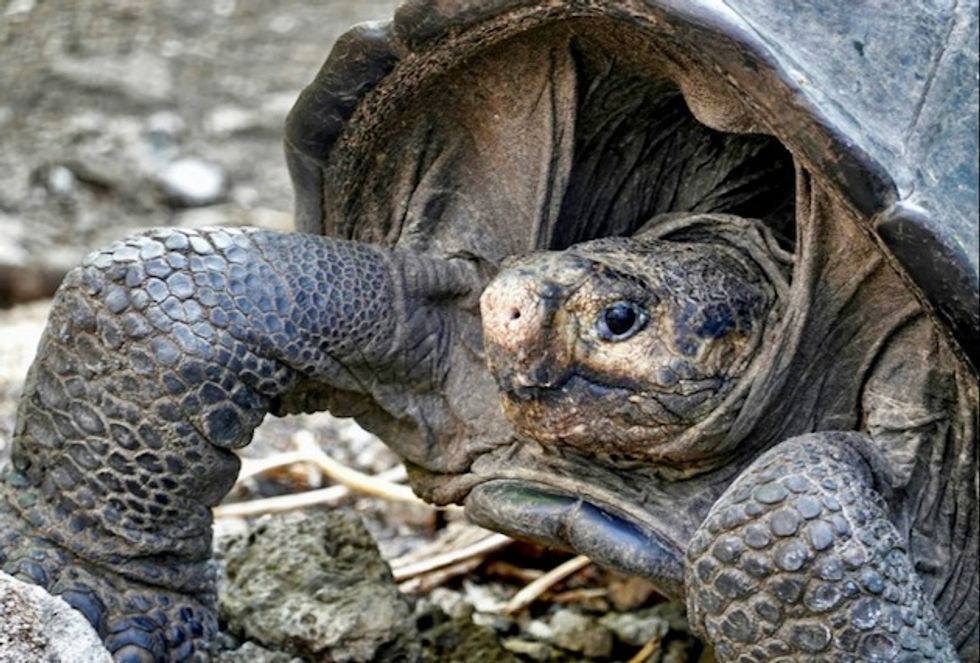 The Fernandina Giant Tortoise was thought to have become extinct more than 100 years ago until this adult female was discovered by conservationists on the Galapagos island of Fernandina on February 17, 2019 AFP / Rodrigo BUENDIA

Conservationists in the Galapagos Islands have found a giant tortoise from a species thought to have become extinct more than a century ago.

The adult female tortoise was found on the island of Fernandina in the west of the Pacific archipelago, and is believed to be a Fernandina Giant Tortoise, also known as Chelonoidis phantasticus, a species last sighted in 1906.

The tortoise is believed to be about 100 years old. It was taken by boat to the main Galapagos conservation center on Santa Cruz island.

The animal "exceeds 100 years" in age and is "a very old tortoise," said Washington Tapia of Galapagos Conservancy, a US non-profit dedicated to conserving the Galapagos.

The islands are best known for their unique flora and fauna, which inspired naturalist Charles Darwin to write his landmark 1859 study on evolution, The Origin of Species.

Ecuador's Environment Minister Marcelo Mata announced on Twitter the discovery of a specimen "of the tortoise species Chelonoidis phantasticus, which was believed to have gone extinct more than 100 years ago."

AFP / Rodrigo BUENDIA Washington Tapia of Galapagos Conservancy, a US group focusing on preserving the unique flora and fauna of the Galapagos islands, transfers the newly-found giant tortoise from Fernandina to Santa Cruz, where conservation efforts are centered

A ministry statement said conservationists were hopeful other members of the species were on the island, judging by tracks and spores they found.

Genetic tests will be carried out to confirm the tortoise was indeed a member of the long-lost species, it said.

The Chelonoidis phantasticus species is native to Fernandina, which is uninhabited, topped by an active volcano, and one of the youngest islands in the chain.

It is one of 15 known species of giant tortoises in the Galapagos, at least two of which have already vanished.

Any remaining Fernandina tortoises may be separated from each other by recent lave flows, researchers said.

AFP / Rodrigo BUENDIA The female giant tortoise is thought to be about 100 years old and scientists will carry out genetic tests to confirm it really is a member of the Fernandina species, last seen in 1906.

In 2015, the Galapagos authorities announced the discovery of a new species of tortoise that they called Chelonoidis donfaustoi, named after Fausto Llerena, the park ranger who for 40 years looked after Lonesome George, the iconic last tortoise of his Pinta species, who died in 2012.

George become an icon of the islands, 1,000 kilometers (600 miles) off the coast of South America.

Scientists tried to save George's species by breeding him with females from a related species, but their eggs failed to hatch. After his death, his body was stuffed and is currently displayed at the Charles Darwin Research Center in the Galapagos.

Giant tortoises are believed to have arrived on the remote volcanic island chain about three to four million years ago, borne by ocean currents. With no natural predators, they spread across the islands and split into different species.

Their numbers were decimated in the eighteenth and nineteenth centuries by sailors who took advantage of their ability to endure long periods without food or water to use them as easily stored fresh meat on Pacific voyages.

Their numbers were also hit by invasive species such as rats, pigs and dogs, which eat their eggs, while other introduced domestic animals like goats destroyed their habitat.

In captivity, the giant tortoises can easily live to more than 100 years.

Scientists have discovered that the tortoises have genetic variants linked to DNA repair, with healing power that enables their longevity.