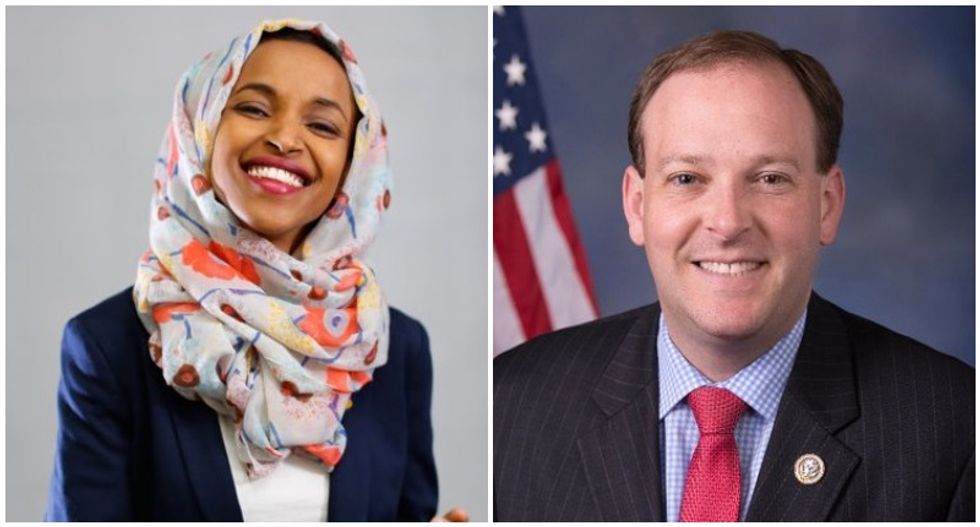 His outburst took place after a writer in the Forward, a Jewish magazine, wrote a piece criticizing him after he claimed Friday to be the target of an anti-Semitic voice mail. Omar and Zeldin had clashed on the social media site earlier in the week.

In an op-ed titled "The Hypocrisy Of Lee Zeldin’s Attack Against Ilhan Omar," Nylah Burton acknowledges that Zeldin had every right to publicize his traumatizing experience.

"There is no question that as a victim of threats and bigotry, Zeldin had a right to expose this violation," Burton writes.

"But what he did next violated the laws of common decency — as well as betraying something deeply sinister. Rather than using the ugly voicemail as an opportunity to create solidarity, Zeldin used it as a cudgel with which to beat freshman Congresswoman Ilhan Omar."

"In the same tweet, Zeldin demanded that Omar publicly state that she disagree with every part of the voicemail, which she promptly did," continues Burton.

She lays out the hypocrisy of Zeldin's position. "For starters, why would Omar be responsible for a random anti-Semitic voicemail on his phone?" she writes.

"The idea that this should be laid down at her doorstep is both racist and Islamophobic. Omar is black and a Muslim, two groups of people who are routinely approached with the unreasonable demand that they denounce this or that person or be smeared as an anti-Semite."

"Omar, whose name was not mentioned once in the voicemail, is not responsible for the actions of the caller," Burton continues.

"And Omar has never once advocated for the oppression — systemic or otherwise — of Jews in America or in Israel. The worst that can be said about her is that she supports BDS, the boycott of Israel, and that she once wrote a poorly worded tweet about Israel, which she has since apologized for," Burton concludes.

In response, Zeldin doubled down, slamming both Omar and House Speaker Pelosi.