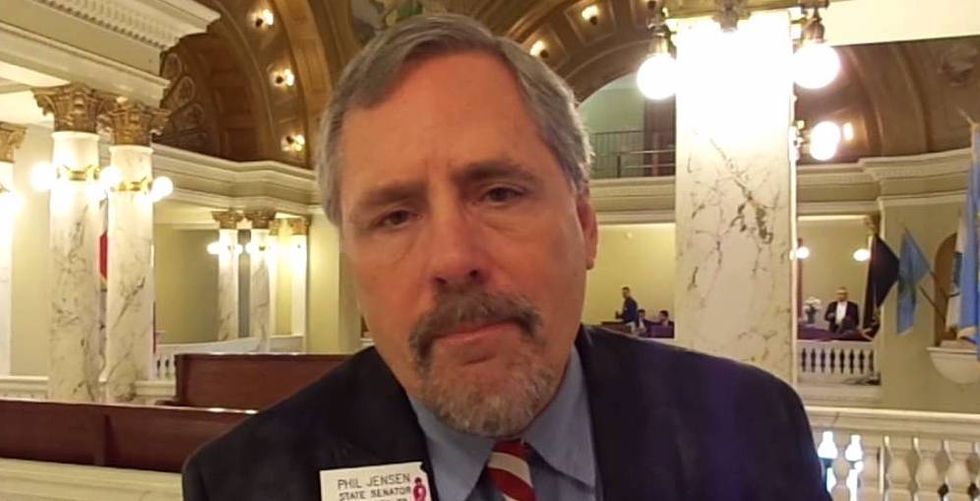 A South Dakota Republican lawmaker gave high school students fliers encouraging them to tattle on teachers who violate their "conservative ideology" — and also attempted to link Democrats to the KKK.

"I think if people want to wipe out reminders of slavery, segregation & white supremacy, we might consider getting rid of the Democratic Party," the photocopied meme, which conflates the antiquated Democratic platform with the modern party, read.

The flier also encourages students to email Jensen's government address if their teachers violate their "conservative values by pushing their own ideology."

The Republican issued a non-apology after the revelation of the flier went public.

"My concern is that public school children are not being taught true black history," Jensen said in a statement. "I realized that a couple items on the handout may have offended the sensibilities of my colleagues, but that was not my intent."

D'Souza, whose books and films have been promoted by President Donald Trump, is one of the leading proponents of the context-devoid claim that Democrats were the party of slavery.

That reading, many scholars and commentators have pointed out, leaves out a key political movement that came to be known as the "Southern strategy," as well as an important fact: that the parties essentially swapped platforms during the civil rights movement.

In the 1960's, after Democratic President Lyndon B. Johnson supported civil rights legislation and thus "alienated the racist wing of his party," a Mediaite history on the Southern strategy from 2016 noted.

GOP presidential nominee Barry Goldwater, meanwhile, had voted against the bill when he was a senator — a move that was unpopular with Republicans in the North, but attracted some Southern voters — and inspired infamous racist Sen. Strom Thurmond to switch from D to R.