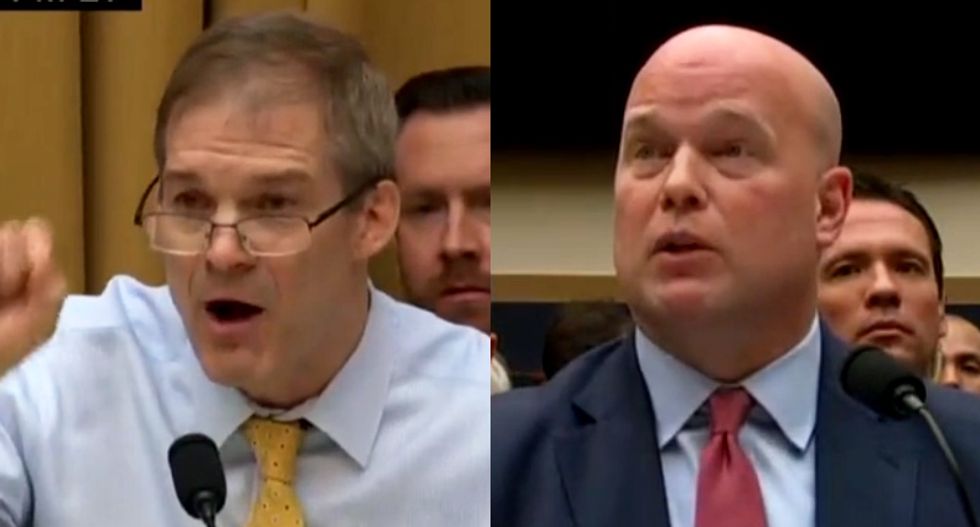 "Why did Rod Rosenstein send a memo to Bob Mueller in 2017 concerning the scope of the special counsel investigation?" Jordan asked Whitaker.

"This is a one-page document. Order 3915-2017 says this. The special counsel is authorized to conduct the special investigation including any matters that arose or may arise directly from the investigation. That's pretty broad. Would you agree?"

"Yes, and in my mind is consistent with other appointments of special counsels," Whitaker responded.

"That's fine. It may be too broad, but as broad as you can get, one page ordered, go do your investigation and anything that arises out of it, you can investigate it as well. But then two and a half months later, we get this three-page memo from Rod Rosenstein, acting attorney general to Robert Mueller, special counsel, title says, scope of the investigation definition of authority," Jordan shot back.

"This is what confuses me," he continued. "Because in this memo that only Mr. Mueller and my guess is you and Mr. Rosenstein and a few people at the Justice Department have seen, most of it is blacked out, in this memo it says this: The following allegations were within the scope of the investigation at the time of your appointment and are within the scope of the order. If that's true, why do you have to say it? If you could do it all along, why do you have to put it in a memo?"

Whitaker tried to explain that because of Session's recusal from the investigation, he was essential recused as well.

"What really troubles me, Mr. Whitaker, right after that statement following allegations were within the scope of the investigation at the time of your appointment and within the scope of the order. Right after that, you know what happens? Everything is redacted. Look at this. The whole darn thing. So if you could do it all along and you have to send a memo to him two and a half months later, and then you redact everything after it. You know what's under the redactions, Mr. Whitaker?" Jordan asked.

Whitaker admitted he knew what was under the redactions, and said it included names. Jordan asked if the memo provided the authority to investigate specific Americans, but Whitaker did not provide a clear answer.

"In this country we don't investigate people, we investigate crimes, and if there are specific American citizens' names in this redacted -- I asked Mr. Rosenstein to see this and he got all mad and huffy in his office and wouldn't show it to me," Jordan said.