Hate is 'creeping back' into America: Why 80-year-old scenes from an American Nazi rally were projected onto Madison Square Garden tonight 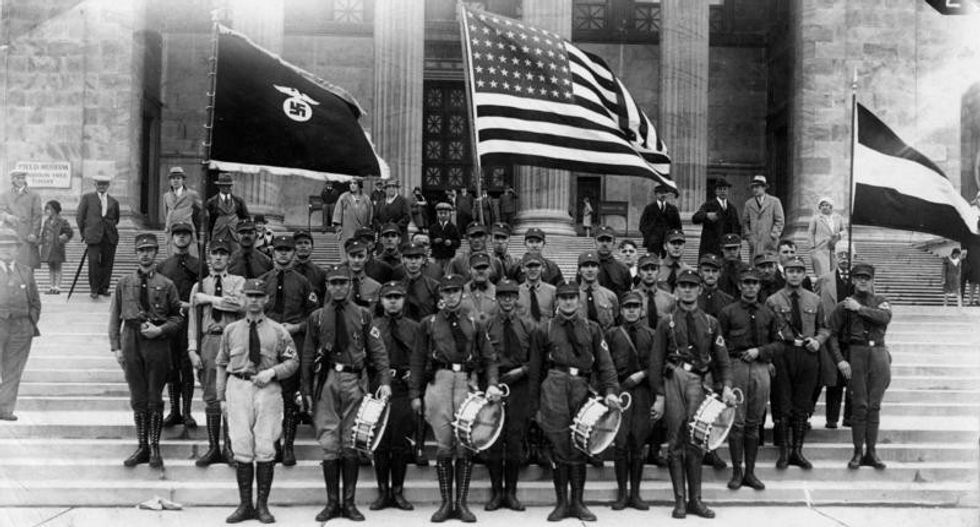 Scenes from Oscar-nominated documentary film ‘A Night at the Garden’ were projected on Madison Square Garden in Manhattan Monday night to commemorate the 80th Anniversary of a Nazi rally attended by around 20,000 Americans on Presidents' Day in 1939.

"Right now footage from our short doc 'A Night at The Garden' is being projected on the outside of Madison Square Garden," the documentary's director, Marshall Curry, tweeted Monday. "The Nazi rally that took place there 80 years ago this week is a reminder that we need to be vigilant about hate creeping back into the mainstream in America," he added.

Right now footage from our short doc “A Night at The Garden” is being projected on the outside of Madison Square Ga… https://t.co/NyYfAJe0tQ
— Marshall Curry (@Marshall Curry)1550533905.0

Although the original rally took place at a different incarnation of MSG (which was on 50th street), the filmmakers projected scenes from the short onto the current arena location for 'symbolic reasons,' per a press release.

“We wanted to highlight the fact that this terrible rally occurred in our country’s most famous arena and was attended by thousands of our American neighbors," Curry said in a statement.

"Discrimination against Jews, immigrants, and other minorities has been growing in the U.S., and it is being fanned by leaders who hope to benefit politically from division and fear....this film is a cautionary tale about what happened when leaders did similar things in 1939.”

See an ad for 'A Night at the Garden,' which Fox refused to air, according to the director, and which aired nationally tonight on CNN and MSNBC below.

The ad for "A Night at the Garden" which Fox refused to run will be airing nationally tonight on CNN and MSNBC. See… https://t.co/sl7IKVVdok
— Marshall Curry (@Marshall Curry)1550526815.0