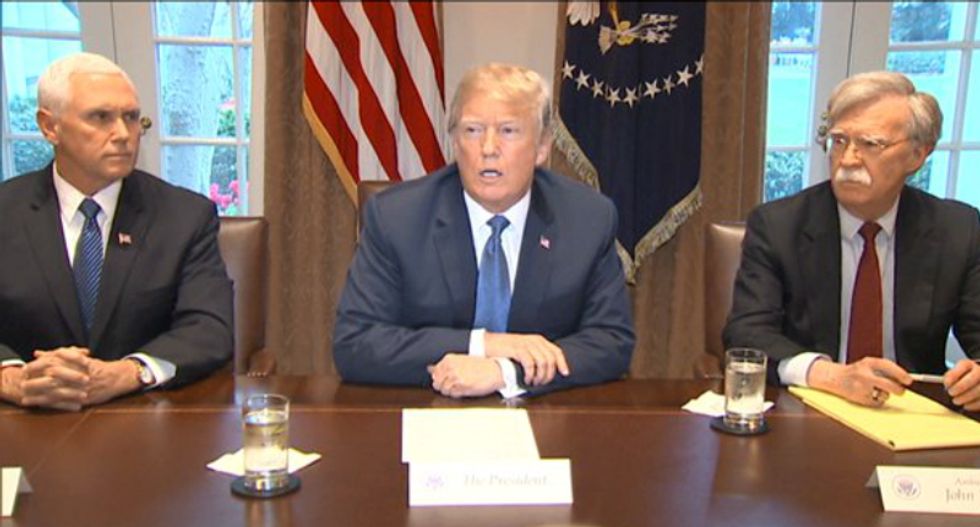 On Monday, President Donald Trump met with the Venezuelan community in Miami, Florida. His speech represented more than just disdain for the country’s president Nicolas Maduro; it was a sign of what may really be behind his increasing rhetoric against Venezuela: Reelection. 2020.

Florida will be a key swing state in next year’s elections. Trump’s overtures to both the Venezuelan and Cuban-American communities were clear.

“The days of socialism and communism are numbered, not only in Venezuela but in Nicaragua and in Cuba as well,” Trump told the crowd.

But Trump’s push on Venezuela is not just about winning over key votes in Florida. It’s about sidelining progressives, distracting from domestic policies, and driving the U.S. into a war that could easily lift him into a second term.

Venezuela has been front and center over the last month. The U.S. has backed the National Assembly head Juan Guaido in his grab for the presidency, enacted devastating sanctions, pushed humanitarian aid, and, according to Cuba, is sending special forces to Puerto Rico and other Caribbean islands with the goal of toppling President Nicolas Maduro.

This is not the first time the White House has been engaged in trying to undermine the Venezuelan government. It’s been at it since the early 2000s. Washington backed the coup against President Hugo Chavez in 2002. The National Endowment for Democracy and the U.S. Agency for International Development have paid millions to opposition groups in the name of democracy.

But never have the sanctions been so crippling. Never has the threat of military intervention loomed so large. Such a move would play right into Trump’s 2020 campaign. A war in America’s backyard. A trojan horse to lock in the president’s second term. Democrats in Congress have been either complacent or complicit.

A war with Venezuela would not be swift, even if carried out through proxy militaries like Colombia and Brazil. Venezuela is polarized and politicized. The country has almost two million soldiers ready to serve, including reservists. Violent action would likely throw Venezuela into a bloody civil war—a war that would last well through the 2020 presidential elections.

George W. Bush launched his invasion of Iraq on March 20, 2003, the year prior to the 2004 electoral campaign. He was reelected. No WMDs were found. Nor was Osama bin Laden, though the United States did generate enough animosity that it planted the seeds for the birth of the Islamic State.

Ronald Reagan’s invasion of Grenada in October 1983 helped to lift his failing approval rating the year before his reelection.

Of course, the situation in Venezuela is dire. President Nicolas Maduro shoulders plenty of the blame. Inflation is through the roof. His fiscal policy has been ineffective. Over two million Venezuelans have left the country in recent years. But the economic warfare and the U.S. sanctions, imposed in 2017 and deepened in recent weeks, have cost the country billions of dollars and blocked access to critical medicine for Venezuelan citizens.

In his discourse on Venezuela, President Donald Trump talks about democracy and the humanitarian crisis. But he overlooks these issues for the countries he considers allies. A great example is Honduras.

If the president was actually concerned with resolving humanitarian crises in the region, he should look not to Venezuela, but to Central America, to fix the structural problems that have led to the migrant crisis—the whole reason Trump says he needs a border wall—and which the United States helped to cause.

Millions have fled Honduras, El Salvador and Guatemala in recent years. They flee violence, drug gangs, repressive regimes. The murder rates in El Salvador and Honduras hover above the rate in Venezuela, according to the World Bank.

In Honduras, the Juan Orlando Hernandez regime retained power in 2017 through fraudulent elections, after he strong-armed Congress and the Supreme Court to approve changes to the Constitution to allow him to run for reelection—the very reason that Congress ousted president Manuel Zelaya in 2009.

In Venezuela, by contrast, despite the opposition’s boycott of last year’s election—after it pulled out of the two-year-long talks with the government at the last minute—Maduro still won the presidency with a greater percentage of the overall Venezuela voting population than Trump won in the United States in 2016.

In Honduras, the assault on community, environmental and indigenous leaders is widespread. Berta Caceres’ assassination is only the most prominent example. Security forces have killed protesters with live rounds to the head. Impunity is rampant.

According to the Center for Economic and Policy Research, Honduras has “the most unequal distribution of income in Latin America,” an inequity that has accelerated over the last decade.

This all has spurred hundreds of thousands to flee each year in an attempt to reach asylum in the United States. Trump’s response has been to send the military to the border and to build a wall.

Ironically, the Central American crisis is one the United States helped to create, by backing brutal regimes and illegally funneling weapons into the region—a strategy it seems it may be trying to duplicate in Venezuela. The very man in charge of those weapons was Ronald Reagan’s Assistant Secretary of State for Human Rights and Humanitarian Affairs, Elliot Abrams, who was recently tapped by Trump to bring so-called democracy to Venezuela.

If he succeeds in toppling Venezuela, the future is bleak. Central America today is perhaps an image of what we can expect for the future: a crime rate through the roof, poverty, widespread inequality.

The White House has an interest in keeping the focus on Venezuela, and not on the controversies and domestic issues that have dogged Trump and his presidency. Venezuela is a way for the president to distract U.S. citizens. A way to tarnish a resurgence in the debate about socialism, which he highlighted in his State of the Union address.

With his bellicose rhetoric and point people trained in subversion and violence, Trump is willing to put peace on the line, not in the interest of the Venezuelan people, but for the United States, for U.S. corporations and conservatives.

Donald Trump’s push on Venezuela is about grabbing at the largest oil reserves in the world, making an example to any other would-be leftist leaders, and above all else, reelecting Trump in 2020.

The Democrats appear to be willing to give it to him.

Michael Fox is a freelance journalist and the former editor of the NACLA Report on the Americas. He is the coauthor of the books Venezuela Speaks and Latin America’s Turbulent Transitions. He tweets at @mfox_us.