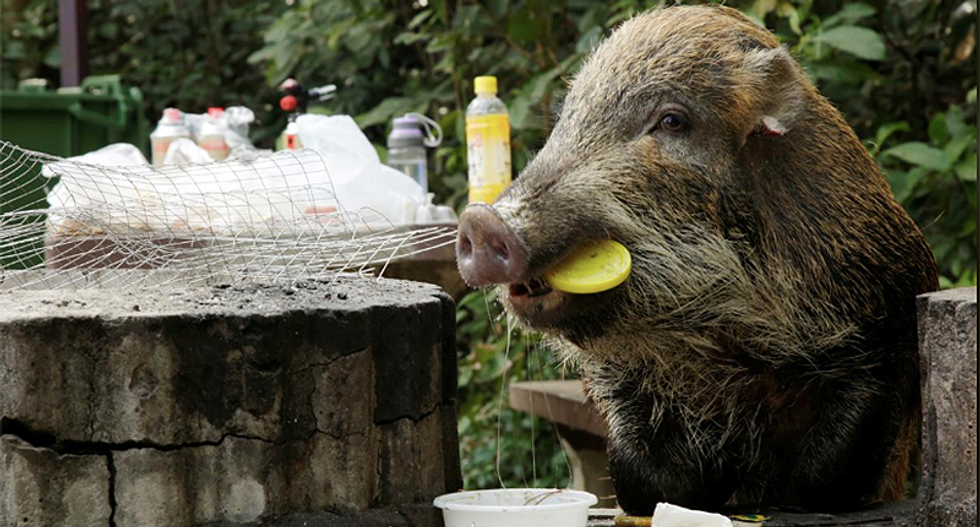 One of the world’s most densely populated cities, Hong Kong, is facing a proliferation of wild boars as the large mammals stray increasingly into built-up areas.

And while some residents welcome sightings of the boars as a symbol of good fortune, especially with the arrival of the Chinese Lunar Year of the Pig on Tuesday, others say reports of attacks show that the wild pigs are becoming a danger.

The global financial hub isn’t well known for its biodiversity, but with 40 percent of its land area comprised of protected country parks and reserves, it still harbors creatures such as boar, barking deer, porcupine, otters, threatened pangolins, giant Burmese pythons and more than 530 species of bird, some highly endangered.

Continued urbanization of the city of 7.4 million is now increasingly drawing droves of wild boar to the teeming metropolis’ fringes. Boar have charged down hikers, raided rubbish tips and camp sites, and even scampered through a shopping mall and a runway at the airport.

“Most Hong Kong wild boars, at this point, have already lost their fear of humans”, said Roni Wong, a member of a community group campaigning for the protection of wild boars.

“The cause of it is feeding, which causes them to lose their natural instincts”, added Wong who has identified numerous spots where residents feed wild animals in violation of local wildlife protection laws.

The habituation of boars to humans has brought some safety concerns. Complaints against wild pigs have more than doubled since 2013, with over 700 incidents reported in 2017, including some attacks on people.

“A lot of the residents who used to take part in outdoor leisure activities, especially at night, are no longer doing that”, said Jeremy Young, a district councillor for the Peak, an affluent area with a conspicuous boar population in its woods.

The Agriculture, Fisheries and Conservation Department (AFCD) said in a statement to Reuters that some pigs “pose imminent risks to public safety, particularly those which have attacked people, or are accustomed to searching for food around built-up areas and also getting easily irritated.”

Young believes the government should once again allow the selective culling of boars by “civilian hunting teams” to mitigate the porcine threat, a practice that was suspended in 2017 after an outcry by animal rights groups.

The AFCD, however, rejected this proposal.

Instead, it said it would take measures to put down, or relocate troublesome pigs to wilder areas, and to fit some with GPS trackers.

Authorities say they don’t know the size of Hong Kong’s wild pig population, nor whether numbers have actually increased or whether they’re just venturing more frequently into urban areas.

“In fact, we see them as our neighbors.”