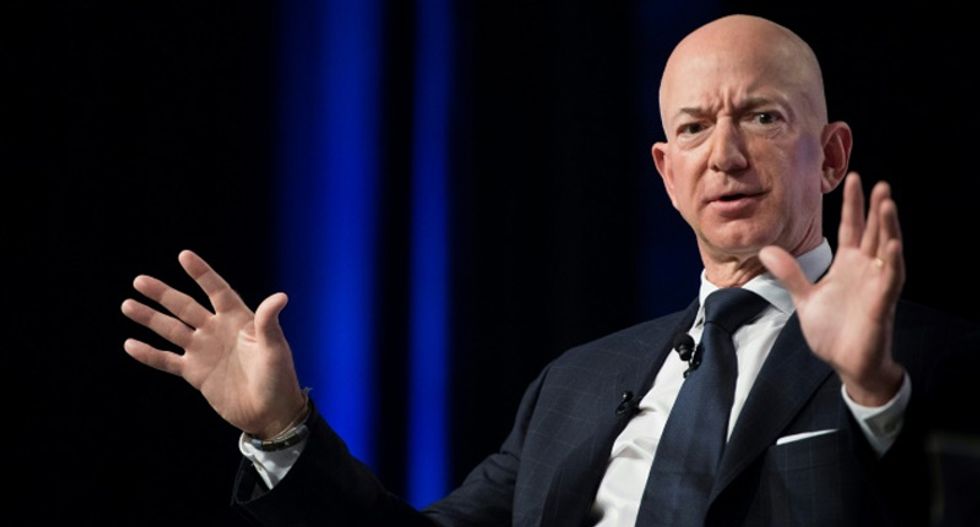 Amazon CEO and Washington Post owner Jeff Bezos discussed buying the parent company of the National Enquirer — the same company he later accused of trying to blackmail him over leaked "below-the-belt selfies" — earlier in 2019.

In interviews with Vanity Fair's Gabriel Sherman, Michael Sanchez, the brother of Bezos' mistress Lauren Sanchez, described the many ways the Amazon CEO considered dealing with American Media Inc.'s leaks about his relationship.

After photos were taken of Bezos and his mistress on a Caribbean cruise in early January 2019, the Enquirer called him for comment — and the Amazon CEO reportedly began discussing buying the company to figure out who was leaking information about him.

“We discussed the possibility to buy A.M.I.—not to kill the story, but to find out the source," Michael Sanchez told Sherman. "They said that’s not a bad idea."

Bezos and the Sanchez siblings even "discussed numbers and the name of the LLC that we’d use," the mistress' brother said. "That's the level of detail we went into."

Sanchez — considered by many to be the Enquirer‘s likely source for the nude photos of Bezos — told Sherman he was not the person who leaked them.

"I had nothing to do with leak of the dick pics. That’s the important thing,” he told Vanity Fair. “I never had access. It’s clear they were sent to others."

"There are, like, 20 dick pics," Sanchez added. "Lauren likely shared them with multiple girlfriends, not in a malicious way, that’s not her style, but when she’s in love, she got a kick out of sharing them. One time she tried to show me one and I was like, ‘What the fuck is wrong with you? I don’t want to see that!’”

He was "less declarative" about whether he was the person who leaked intimate text messages between Bezos and his sister, Sherman noted.

"I’m not saying I didn’t do something,” Sanchez said. “Until I go under oath, what I can tell you now is that ever since April 20, when I met Jeff, my only goal has been to protect Jeff and Lauren.”