Maddow trolls Roger Stone for being hauled into court before judge he threatened: 'Better bring a toothbrush' 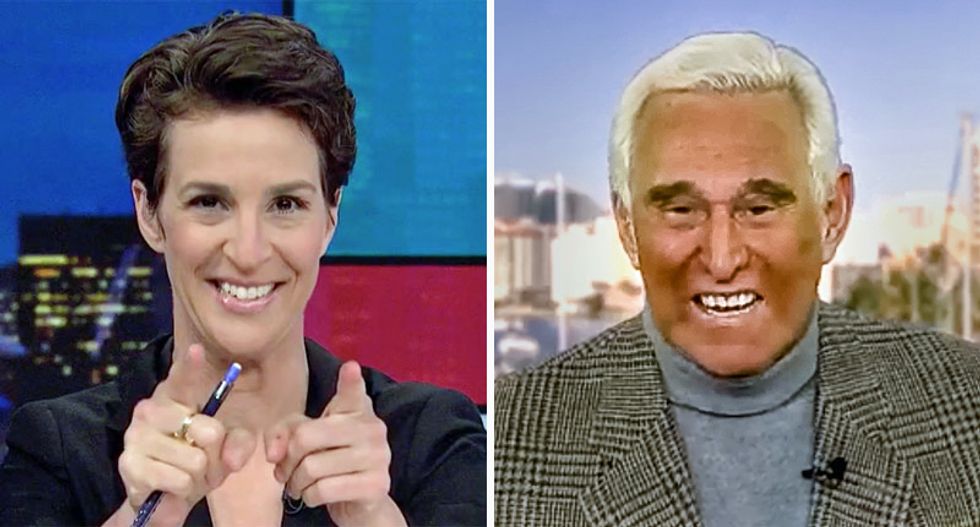 Stone seemingly threatened U.S. District Judge Amy Berman Jackson in an Instagram post with rifle crosshairs next to her head.

"Defendant is ordered to show cause at a hearing to be held on Thursday, February 21, 2019 at 2:30 p.m. as to why the media contact order entered in this case and/or his conditions of release should not be modified or revoked in light of the posts on his Instagram account," Jackson ruled.

Maddow joked, "and that's how we learned that the president's long-time advisor Roger Stone in all likelihood will be packing a toothbrush on Thursday when he is ordered to appear at this show cause hearing in his case we learned about today in this minute order."

"And this, of course, follows the genius move by Roger Stone yesterday to when he decided to post a photo of the judge -- who is hearing his case -- on his Instagram account, the photo included a closeup picture of the judge with a little cross hairs next to the judge's head as if she was being targeted by somebody looking through a rifle scope," Maddow continued.

"Roger Stone's lawyers at that hearing will be expected to show cause as to why these actions by Mr. Stone targeting the judge should not result in her issuing a strict new gag order on everybody involved in the case including Mr. Stone himself and more importantly than that, Mr. Stone's lawyers will be expected to show cause on Thursday afternoon why these actions by Roger Stone should not result in the judge modifying Roger Stone's conditions of release," she explained.

Maddow recalled the odd dynamics surrounding Stone being released from jail before his trial.

"Because you will remember that Roger Stone was arrested and he was indicted, he was arraigned on seven felony charges, but thereafter he walked out of the courthouse," she reminded. "Those conditions of release thus far have allowed Mr. Stone not only to be free and not in jail while he awaits the start of his trial, the judge was generous enough with Roger Stone that she allowed him not only to be free, she allowed him to not put up a single dime to secure that bond -- he didn't have to put up any money for it at all."