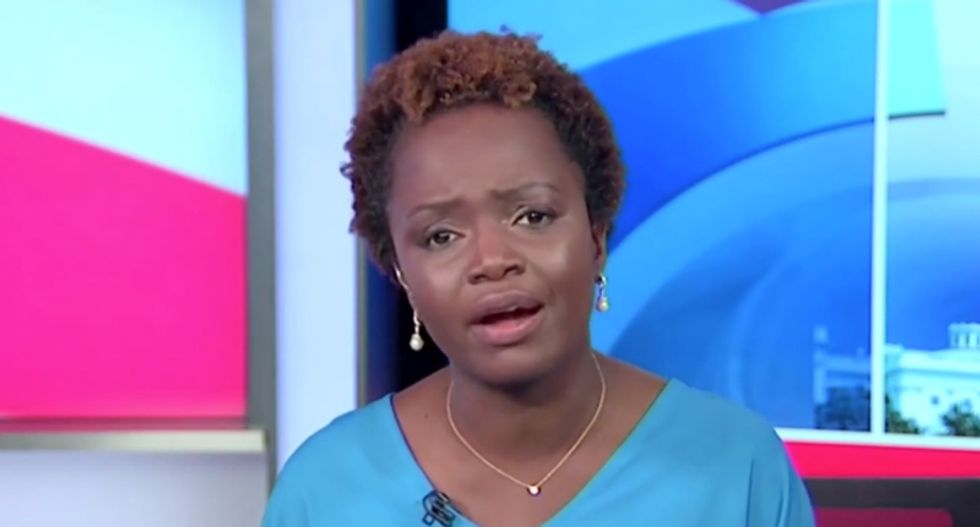 MoveOn senior advisor and MSNBC political analyst Karine Jean-Pierre called out the Republican Party on Monday, telling host Chris Jansing the party had "no moral ground" to criticize Virginia's embattled Democratic governor while harboring plenty of their own racists, who she named and shamed.

"We've come a long way in 12 years," said Jean-Pierre, contrasting the two parties. " We have candidates leaning into their race, leaning into their gender, and I think it says a lot about the Democratic Party, but also as a country, of where we are." Then she turned to the Republicans.

"I have to say this, Chris, about the Republican Party: there's no moral ground," she said. "Yes, now they're speaking out against Steve King, but they haven't asked for King to resign." King's history of racist statements cost him his committee assignments soon after Republicans lost the House in the 2018 election.

"Many of the Republicans speaking out about Ralph Northam, they supported Cory Stewart. They've supported Ed Gillespie," Jean-Pierre went on. "We have Donald Trump who has shown like you mentioned, Chris, with Charlottesville and other policies, he has really bigoted and racist ways. And he's still there."

"Why have Republicans in Congress not stepped up and made him accountable for the things he's done and the things that he's said?" she asked rhetorically. Democrats, she added, "have been really clear" about Governor Northam. "I think that's the difference. They've said he should resign."