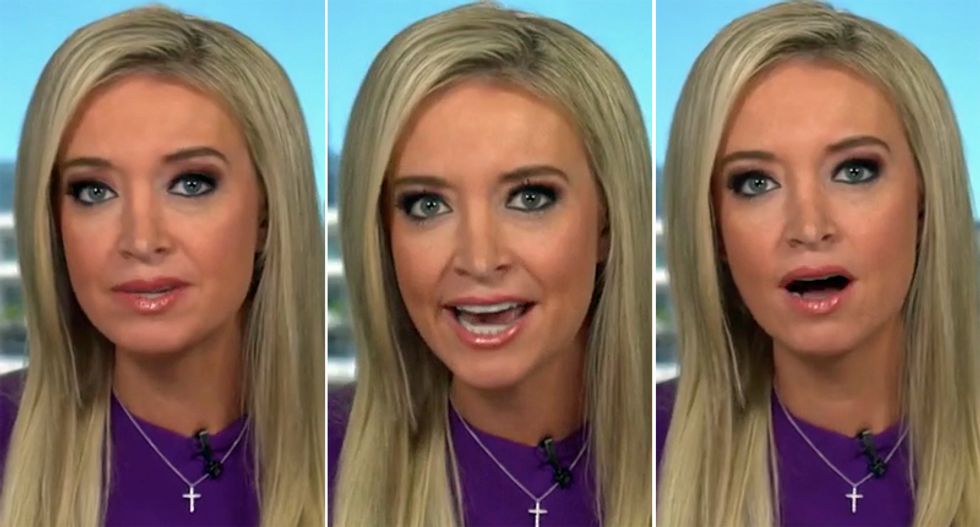 The national spokesperson for the Republican National Committee crashed and burned on MSNBC on Saturday as she attempted to excuse away President Donald Trump's pattern of racism.

McEnany demanded the resignation of Virginia Governor Ralph Northam, who on Friday admitted to wearing a racist costume, but attempted to walk back his admission on Saturday.

"It's time for him to resign," McEnany said.

"Kayleigh, as I think about what you said rather vigorously that he should resign, I'm curious if there is a double standard at all when it comes to Republicans and this regarding Congressman Steve King," host Alex Witt wondered. "He's got a plethora of past racist remarks here. Was he given a pass?"

"Should he be given a pass?" Witt asked. "Should his resignation be caused for?"

"Absolutely not," McEnany argued. "He wasn't given a pass, he was stripped of his committee assignments and roundly condemned immediately by everyone in the Republican Party."

In reality, King was only condemned for his most recent comments on white nationalism, but the Republican Party had enabled his racism for years.

McEnany then tried to distract from King by attacking Rep. Rashida Tlaib (D-MI).

"If we want to talk about double standards, I fail to have even heard a single condemnation of Congresswoman Rashida Tlaib, whose chief fund-raiser runs a page where they called Jews satanic, where they question the deaths in the Holocaust. Where is the condemnation?" she asked.

"Kayleigh, I'm Jewish," Alter noted. "I'm not down with her statement."

At that point, McEnany attempted to deny that Trump is racist.

"He hasn't been racist," she claimed. "That's ridiculous."

"President Trump has engaged in racist rhetoric against Muslims, Mexicans, African-Americans -- and by not condemning what happened in Charlottesville, Jews," Alter noted.