Pat Robertson: ‘Homosexuals’ want to destroy society to get ‘their weird way of doing sex’ legitimized 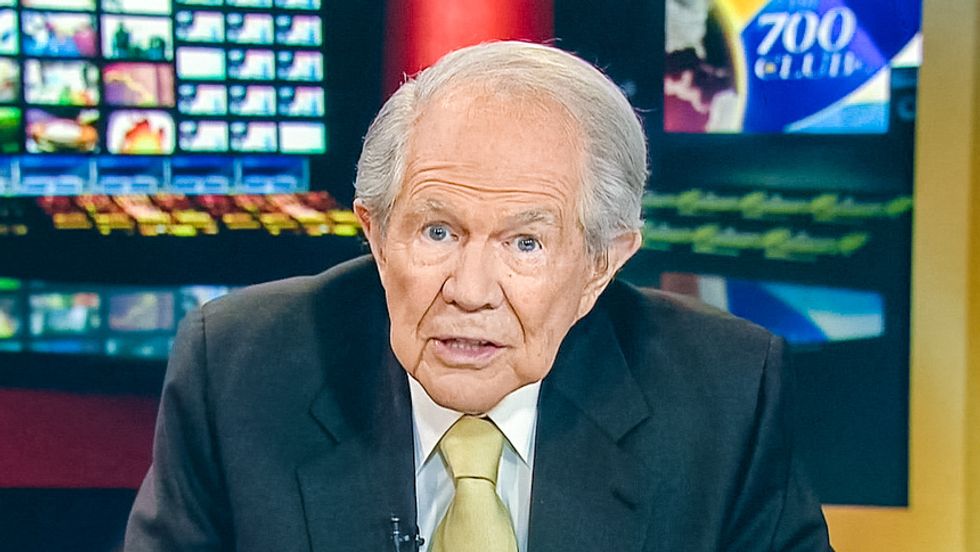 Pat Robertson is still hard at work hosting his "700 Club" Christian TV show which he started way back in 1966. Next month Robertson will turn 89, and in April his show will turn 53. It's been a long run, and Robertson doesn't seem to be considering retiring any time soon.

Also not retiring are the televangelist and former Southern Baptist minister's extremist views.

For decades Robertson has attacked LGBTQ people, telling lies about them in order to build his base of followers who send him money. He's claimed, "Christians are being made to bow down before the two percent who are homosexual," which is false.

"Love affairs between men and animals will be ... absolutely permitted," Robertson falsely claimed one month after the Supreme Court's 2015 ruling supporting marriage for same-sex couples. "Polygamy, without question, is going to be permitted. And it will be called a right."

That has yet to become true.

On Monday, Robertson renewed his attacks on the LGBTQ community, in an ignorant, harmful, hurtful, and and hate-filled screed.

Robertson now claims the LGBTQ community wants to destroy society so that society will be supportive of same-sex sex – which makes no sense.

“The incredible thing about the homosexuals is they are willing to destroy lives and destroy the whole fabric of society so long as they and their weird way of doing sex is legitimized,” Robertson told his supporters, as Right Wing Watch's Kyle Mantla reports.

Robertson was responding to news reports a City of Philadelphia refused to renew a Catholic adoption agency's license over its discrimination against same-sex couples.

“I think if Christians begin to speak out and insist that if some politician goes along with the gay agenda, that they’re going to be voted out of office,” Robertson claimed. “Once they get that message, they’ll start saying, ‘We want to listen to the majority of the people in our society.’ Until they do, that small minority is going to be dominating everything we do and every aspect of our lives.”

Robertson is perhaps unaware that the majority of Americans support same-sex couples' right to marry and raise children.