'All this plays into Putin’s hands': Nuclear weapons expert explains how Trump just gave a huge 'gift' to Russia 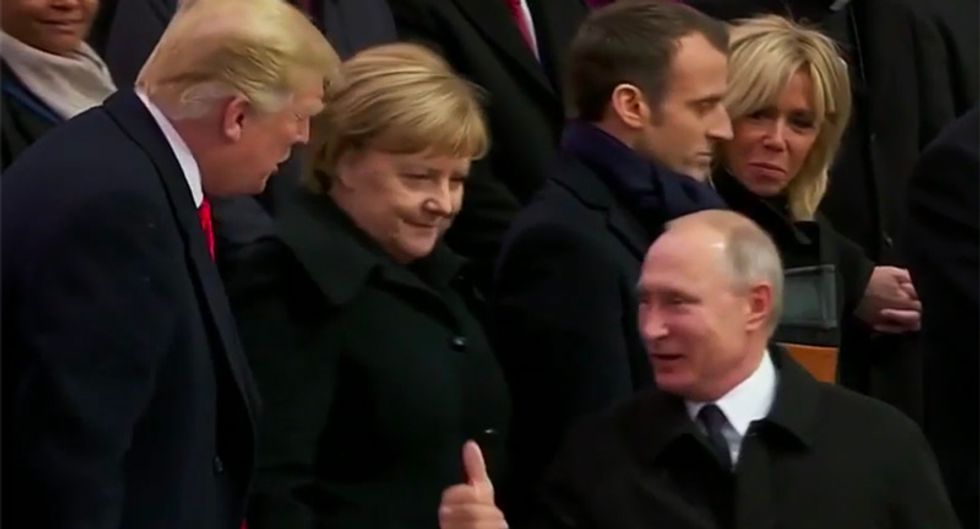 Breaking a precedent set by President Ronald Reagan, President Donald Trump pulled the United States out of the Cold War-era Intermediate-Range Nuclear Forces Treaty, which helped dial back the long-running arms race between the United States and the Soviet Union.

In a press statement, Trump implied that by pulling out, he was standing up to Russia:

Tomorrow, the United States will suspend its obligations under the INF Treaty and begin the process of withdrawing from the INF Treaty, which will be completed in 6 months unless Russia comes back into compliance by destroying all of its violating missiles, launchers, and associated equipment.  Our NATO Allies fully support us, because they understand the threat posed by Russia’s violation and the risks to arms control posed by ignoring treaty violations.

But Joseph, Cirincione, an expert in nuclear weapons policy writing for the Washington Post, argued the exact opposite.

"All this plays into Putin’s hands," he said.

Cirincione put much of the blame for the move on National Security Adviser John Bolton, who has often played a role in dismantling these types of treaties. Bolton is not known for his pro-Russia views, unlike Trump, but in this case, Cirincione argued, he bolstered the Kremlin.

The case for pulling out of the treaty is weak, according to Cirincione.

"Russia is likely in violation of the INF Treaty," he explained. "It has deployed missiles near its border with Europe at ranges that exceed those allowed by the agreement. But when someone breaks the law, the answer is not to repeal the law. There are well-established methods for bringing an offending nation back into compliance. ... But Bolton does not want to fix the treaty; he wants to kill it."

America will pay a high price for this rigid ideology. President Trump walking out of Reagan’s treaty is a gift to Russian President Vladimir Putin. It doesn’t fix the problem; it makes it worse. Now, there will be no restraints whatsoever on Putin’s ability to deploy hundreds of missiles, should he desire. The United States will likely be blamed for the collapse of the treaty, widening the split within the North Atlantic Treaty Organization. Europeans are already shaken by the U.S. withdrawal from the Paris climate accord, the Trans-Pacific Partnership and the Iran nuclear deal. This will increase their doubts about U.S. commitment to their security.

In light of Trump unusual fealty toward Putin, this move only makes the president's relationship with Russia look more suspicious.

"It raises serious questions about whether Putin and Trump discussed this in any of their five secretive meetings," wrote Cirincione. "Whatever Bolton’s ideological agenda, this is certainly helping not hurting Putin’s Russia."

He noted that Congress appears prepared to push legislation that could block Trump from actually going forward with the treaty. Even Republican lawmakers have shown that they're willing to rebuke Trump with regard to his unorthodox and dangerous foreign policy, so it's conceivable they could tie Trump's hands.

But even still, congressional action can only do so much to thwart a dangerous president — particularly in foreign policy where he has most autonomy. If it wants to put a stop to Trump's reckless administration, Congress needs to take more decisive steps.

The Pogues frontman Shane MacGowan, best known as the singer of Christmas favorite "Fairytale of New York", has been admitted to hospital, his wife said.

The 64-year-old Celtic punk rocker's wife Victoria Clarke wrote on Twitter on Monday that MacGowan was "in hospital again and really hoping to get out asap!".