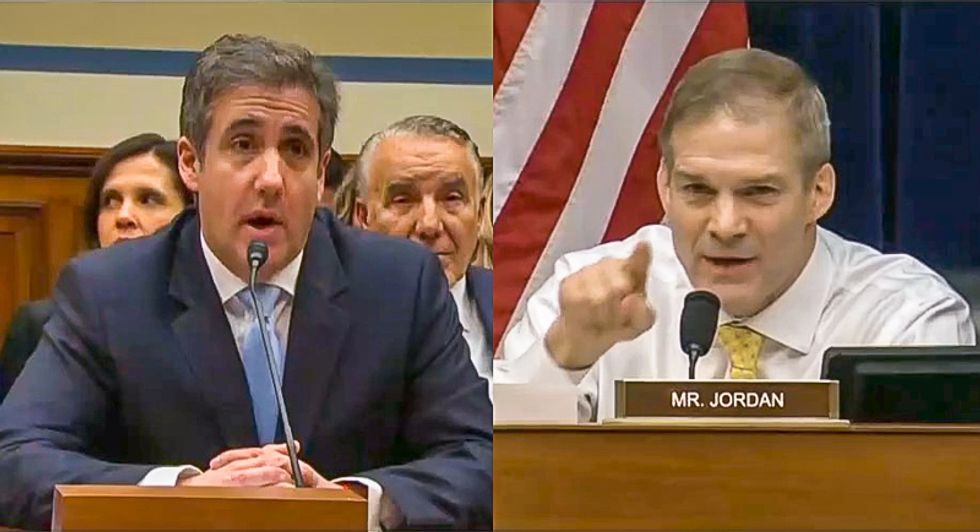 Among Republicans' claims is Cohen lied when he said: "I did not want to go to the White House."

Two top House Republicans on the House Oversight Committee have just sent a letter to Attorney General William Barr asking him to open an investigation into Michael Cohen for allegedly lying to Congress. Cohen testified on Wednesday and Republicans focused on attempting to destroy his credibility by painting him as a serial liar. Cohen worked for Donald Trump for over a decade.

Among evidence they refer to is a tweet from Bo Dietl, a former NYC police detective and now a right wing Trump supporter who contributes to Fox News. In 2017 Axios reported Dietel admitted "he was hired by Fox News to dig up information on Gretchen Carlson and Andrea Mackris that would discredit their sexual harassment allegations" against Roger Ailes and Bill O'Reilly.

That tweet is in reference to remarks Cohen made before Congress Wednesday, saying, "I was extremely proud to be the personal attorney for the President of the United States of America," and, "I did not want to go to the White House."

This appears to be the question from the Oversight Committee’s truth in testimony form that Meadows accused Cohen o… https://t.co/zaYljExudg
— Ryan Lizza (@Ryan Lizza)1551291837.0

Rep. Jordan, known at home as a "grandstander," once tried to impeach Deputy Attorney General Rod Rosenstein, just hours before announcing he would run for Speaker of the House. Democrats won the House and Jordan lost the race for Minority Leader.