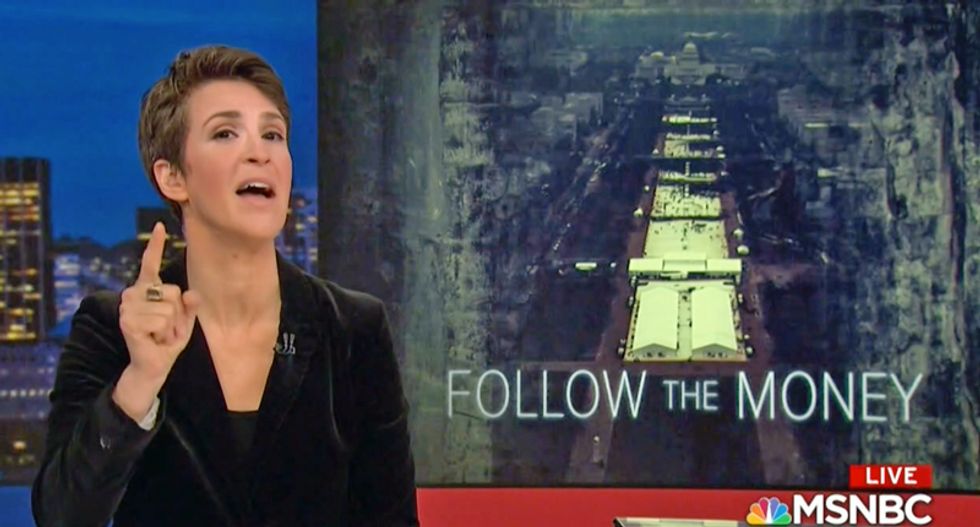 MSNBC anchor Rachel Maddow on Tuesday "followed the money" from Trump's inauguration to a sweetheart deal that will make climate change worse.

Maddow noted that federal prosecutors have subpoenaed Trump's inauguration committee as part of their investigation into the White House.

Maddow was gobsmacked that Trump spent so much more money than Barack Obama -- for such a small inauguration.

"It has been this puzzling thing about the Trump presidency from the very, very beginning," she noted. "What I mean is that mathematically, the numbers -- whether you have feelings about them -- they just didn't make sense."

"For the giant inauguration -- for Obama, the biggest ever -- they raised and spent about $50 million," she noted. "For the comparatively tiny one that happened after that, they spent twice that amount. They spent more than twice that amount."

"I mean, given what actually happened at the Trump inaugural, how on earth did they account for raising and spending over $100 million on this?" she wondered.

Maddow noted one after-the-fact contribution, that came even after the Trump inaugural had announced it would be giving left-over money to charity.

The $300,000 donation, which was received over seven weeks after the inauguration, came from Murray Energy Corporation -- the largest coal company in America.

Murray also donated $1 million to a super PAC that worked to elect Trump.

"Credit where credit is due -- to the enterprising reporters who have just dug up this new jaw-dropping scandal about this White House and government being put up for sale," Maddow noted.

The host explained the Tennessee Valley Authority, a federal agency with which the president "weighed in" to help Murray energy.

Coal is an important part of our electricity generation mix and @TVAnews should give serious consideration to all f… https://t.co/yljvUmkAE5
— Donald J. Trump (@Donald J. Trump) 1549922605.0

"This is like the Platonic ideal of corruption," Maddow noted. "Murray pays Trump -- and Trump uses the presidency to direct a public agency to pay Murray. To prop up Murray's business, use federal resource, use the taxpayers' resources, use the country's assets to reward the guy that gave him money."

"A GOP power grab shatters 30 years of political progress for Black voters in Galveston County" was first published by The Texas Tribune, a nonprofit, nonpartisan media organization that informs Texans — and engages with them — about public policy, politics, government and statewide issues.

CPAC Hungary, Day 1: Conservatives vilify media and vow the left will be 'exposed, demonized and crushed'

On Thursday morning in Budapest, the first Conservative Political Action Conference (CPAC) to be held in Europe began with a flourish. Hungarian Prime Minister Viktor Orbán delivered the opening keynote address, laying out a 12-point "open source" plan for right-wing advocates around the world to replicate the "Christian conservative success" of his nation. Hungary, said Orbán, "is the laboratory where we have come up with the antidote to progressive dominance."

One key ingredient of this "antidote," Orbán said, was that conservatives must decide to "play by our own rules." He also advocated the values of "national conservatism" (a central theme on the right these days —more on that tomorrow); a foreign policy based on national interests — a clear reference to the criticism Hungary has received for its tepid and uncertain condemnation of Russia's war on Ukraine; and preemptively "expos[ing] the intent of your enemy," a defense of Hungary's "don't say gay" law barring minors from accessing LGBTQ books or other content. In a tribute to CPAC itself, he also called for building institutions that can pass on conservative principles and crafting alliances with other right-wing actors around the world.

We ought to revive that old-time, pre-Roe, religion according to which an embryo is an embryo, not a person. That’s what I said last week.

Before 1973, the year the US Supreme Court decided Roe, the most opposed to abortion were Catholic dioceses. Other religions were indifferent or in favor of women’s ultimate authority over their bodies.