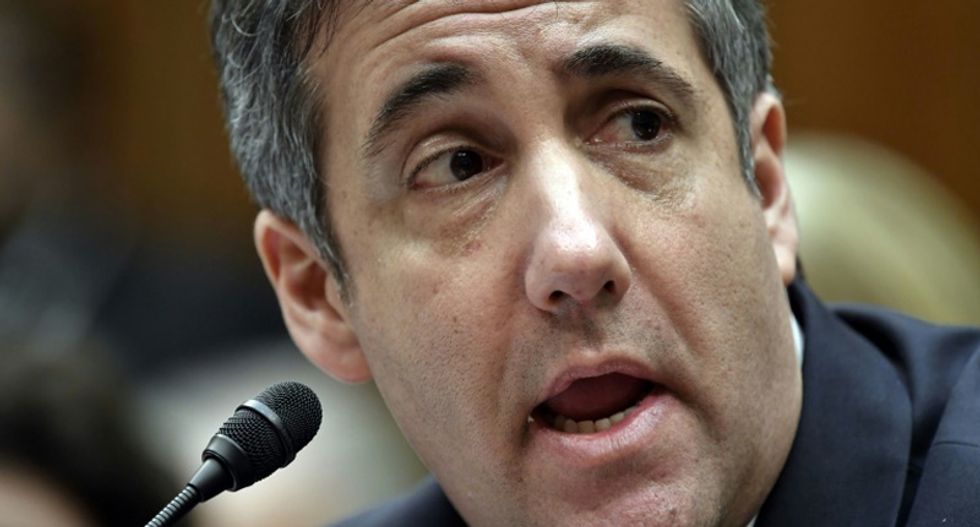 From the first moment that Rep. Mark Meadows, R-N.C., feigned outrage before the House Oversight Committee meeting began on Wednesday morning, demanding that Michael Cohen's testimony be postponed, Republican strategy was clear. They planned to discredit the testimony from Donald Trump's former personal lawyer and fixer by painting Cohen as a liar, a criminal and a cheat, and arguing that therefore no one should believe him.

The problem is that no one denies that Michael Cohen is all these things, including Cohen himself. Indeed, it's obvious that Cohen's willingness to lie and cheat was the main and perhaps only reason that Trump hired him in the first place. Cohen's history is damning evidence of Trump's bottomless need for the services of those who won't hesitate to commit crimes or violate ethical codes on his behalf.

But for some reason, Republicans kept harping during Wednesday's hearing on Cohen's history of misbehavior as if it somehow exonerated Trump, who they spoke of in almost reverent tones — when they bothered to acknowledge Cohen's decade-long close relationship with the president at all. As for Cohen's role as the deputy finance chairman for the Republican National Committee -- that was mentioned only once and in passing (by a Democrat).

“I’m responsible for your silliness because I did the same thing you’re doing now, for 10 years," Cohen responded. "I protected Mr. Trump for 10 years.”

As Rep. Stephen Lynch, D-Mass., pointed out in a memorable sound bite, it's not that Republicans are outraged about Cohen's past lies, it's that "they’re afraid you’re going to tell the truth."

Of course, as Cohen stated clearly and emphatically, he didn't just expect people to take him at his word. As he indicated in his opening remarks, he brought receipts: Copies of checks Trump signed to reimburse him for the illegal hush money paid to Stormy Daniels to cover up their sexual encounter, evidence of Trump's fraudulent use of his nonprofit foundation, and even evidence that Cohen had threatened the schools Trump had attended in order to hide his grades and test scores.

None of this, however, stopped Republicans — one after another, in a drearily repetitious performance — from grandstanding about how terrible of a person Cohen was and how awful it was that he had told lies in the past. Somehow or other, Cohen's tarnished character is supposed to exonerate the man who hired him and deployed him for a decade as a fixer. Various GOP congressmen even tried to paint Trump as the victim, asking Cohen repeatedly about a hypothetical book or movie deal — which do not exist — as if Cohen somehow owes silence to a former boss who turned his back on him after asking him to cover up his corruption for a decade.

Republicans didn't even pretend to be interested in the truth about any of the substantive matters Cohen came to discuss. They simply went all out in running defense for Trump and repeating White House talking points. Even under those circumstances, it was difficult to understand their strategy. If their goal is to convince the American public that Trump is not a criminal, repeatedly reminding people that his right-hand man for a decade is now on his way to prison for the numerous crimes he committed on Trump's behalf seems ill-advised.

But here's the thing: Republicans aren't really trying to convince anyone of anything. The entire pathetic display was calculated toward one goal: Giving Trump supporters an excuse to dismiss Cohen's testimony. For this reason, the defense didn't need to be coherent, much less persuasive. Republicans simply needed to strike a post of moral indignation and toss out some incoherent catchphrases that their voters can cling to.

There was also a side benefit here: Watching one Republican after another advance this self-contradictory, dishonest nonsense was enough to drive any viewer of good faith slightly mad with rage. And Republicans of our era don't mind making fools of themselves, so long as they're successfully trolling the liberals.

Despite the Republican distractions and theatrics, though, Cohen's testimony against Trump was a sobering reminder of how dire the current situation is. Cohen painted a picture of an operation — first the Trump Organization and then the 2016 Trump campaign — that not only was comfortable with criminal deceit and fraud, but frankly abhorred any kind of ethical behavior.

Cohen described how he and Trump Organization CFO Allen Weisselberg casually pondered bribing someone else to pay off Stormy Daniels, before they decided Cohen would do it himself. He spoke about Trump's decades-long history of working with David Pecker of the National Enquirer to bribe all manner of people into staying silent regarding all sorts of Trump stories. He said that "Trump’s desire to win would have him work with anyone."

Those words had a certain insight and power, but of course we cannot forget Cohen's past. The gleeful, brazen bully who became a daily fixture on cable news during the 2016 election campaign has been replaced by this sad man who seemed to waver between self-pity and genuine regret for the things he's done.

But if Republicans thought that Cohen, in his currently broken state, would cower before them, they had another think coming. Whenever they came after Cohen, his old belligerent self — the man who, by his own admission, threatened people on a regular basis for Trump — peeked out. He shamed Republicans for their current dishonesty and warned them, repeatedly, of the dangers he knows too well of doing unethical things for a man who has no loyalty to anyone but himself.

Those people who "follow Mr. Trump as I did, blindly, are going to suffer the same consequences that I’m suffering," Cohen warned.

Republicans on the House Oversight Committee did not, however, heed his warning, continuing to fake outrage and spin out incoherent lies and fantasies that serve no other purpose but to cover for a manifestly corrupt president whose extensive history of criminality are beginning to come into focus.

It would be nice if Michael Cohen were right and everyone who lies for Trump gets their just desserts. That's certainly what happened to him. But Republicans are so brazen in their corruption for a simple reason: They know that thanks to gerrymandering and the disproportionate representation of voters in rural areas and red states, most of them hold safe seats in Congress. They can lie and cover up Trump's crimes until the end of time and conservative voters in their districts will continue to support them, doggedly and even enthusiastically, as long as they continue to dish out racist and sexist policies.

That fact lingered like a stale fart throughout the entire Cohen testimony. The accusations that Cohen leveled, many of them backed up with substantial evidence, should be more than enough to oust any president — and that's all with Cohen carefully avoiding any mention of direct collusion with Russian intelligence to interfere with the election. But driving Trump from office before 2021 would require Republicans, both voters and politicians, to accept the evidence before them, that their president is a crook who is only using them for personal gain.

Watching the Republicans spend the hearing attacking Cohen over his known and confessed offenses, instead of listening to what he has to say, makes clear that's not going to happen — certainly not now, and likely not before the next presidential election.

Despite this, Cohen's testimony was still addictive TV. Having him sadly but determinedly lay out what he learned from a decade of working for a man he described as a "racist," a "con man," and a "cheat" was valuable, even if there was no real doubt about any of those things before this.

It's difficult, amid the constant reality-show chaos that Trump constantly rains down on us, to step back and absorb the fact that 62,985,106 Americans were so attached to their bigotry and blindness that they were willing to hand the White House over to a shameless grifter rather than a woman who supports social progress. Cohen's long recounting of so many stories about Trump's corruption was a necessary reminder of the moral rot that led to Trump's nomination and election in the first place, along with the moral rot that protects him today.

Cohen is going to federal prison for his role in all this, something he reminded the committee frequently in his bouts of self-pity. His warning — or was it a curse? — was that everyone else who played a role in empowering Donald Trump will come to regret it as well. The 65,853,625 Americans who voted for Hillary Clinton, who tried to prevent this from happening, can only hope that his prophecy will come true.