Rod Rosenstein will resign the Justice Department in mid-march 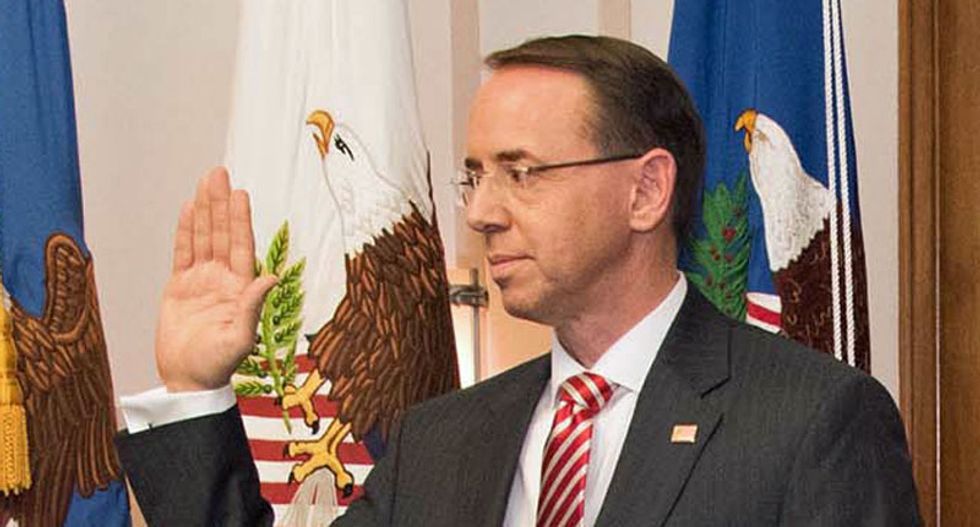 Deputy Attorney General Rod J. Rosenstein taking the oath of office inside the Department of Justice.

Rod Rosenstein, the U.S. deputy attorney general who appointed a special counsel to investigate possible ties between Russia and President Donald Trump’s campaign, is expected to step down by mid March, a Justice Department official said on Monday.

Rosenstein had been expected to depart shortly after new Attorney General William Barr assumed office. Barr was confirmed for the role by the U.S. Senate last week.

The Justice official said Rosenstein’s departure was not related to renewed allegations that he considered wearing a wire in meetings with Trump and using the 25th amendment of the U.S. Constitution to remove the president from office.

Rosenstein, the No. 2 official at the Justice Department, in May 2017 named Special Counsel Robert Mueller to investigate ties between Trump’s 2016 presidential election campaign and Moscow. The investigation continues.

A registered Republican, Rosenstein made the decision because his then-boss, former Attorney General Jeff Sessions, a Trump supporter during the 2016 campaign, had recused himself from the issue.

Last September, the New York Times reported Rosenstein in 2017 had suggested secretly recording Trump and recruiting Cabinet members to oust the president using the provisions of the Constitution’s 25th Amendment.

In an interview broadcast on Sunday with CBS News “60 Minutes,” former acting FBI Director Andrew McCabe confirmed the Times account that Rosenstein considered wearing a wire in meetings with Trump.

Rosenstein said both the Times story and McCabe’s account were “inaccurate and factually incorrect,” which a Justice Department spokeswoman reiterated after the “60 Minutes” interview.

Earlier on Monday Trump accused both McCabe and Rosenstein of planning a “very illegal act,” which he described in a tweet as “illegal and treasonous.”

Barr now has oversight of the investigation.

Rosenstein had attracted far more attention than is typical for the No. 2 Justice Department official because of his decision to appoint Mueller to lead the investigation eight days after Trump fired James Comey as director of the Federal Bureau of Investigation.

Trump has frequently and publicly seethed about the Mueller probe, the Federal Bureau of Investigation and the Justice Department, which oversees them both.

The president has denied any collusion and Russia says there was no election meddling, despite findings to the contrary by U.S. intelligence agencies.

Mueller’s investigation, which the president has repeatedly called a “witch hunt,” has so far netted 34 individuals and three companies who have pleaded guilty, been indicted or been otherwise swept up in the inquiry.