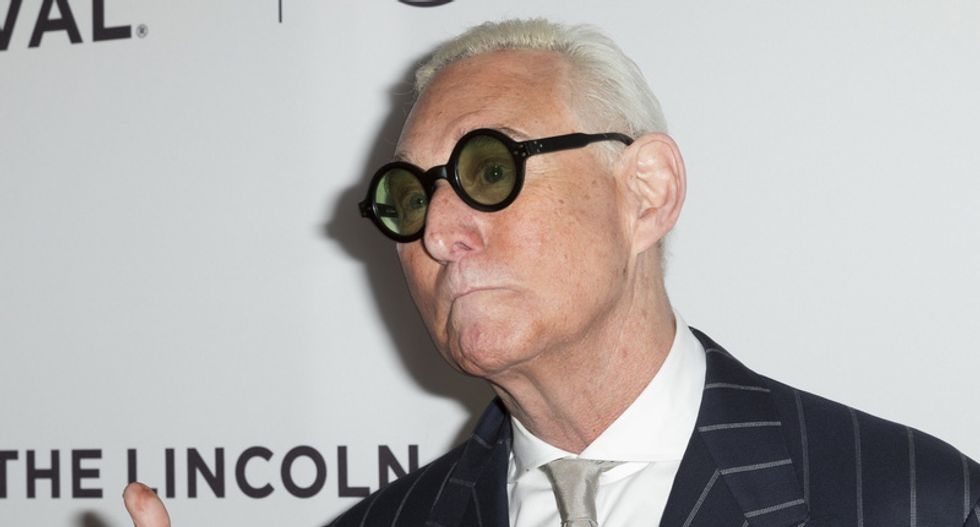 At DCReport we focus on what politicians do, not what they say. Sometimes, however, parsing words is important. Such is the case with what Roger Stone, the freshly indicted adviser to Donald Trump, said after he was indicted Friday, Jan. 25.

Stone has been a dirty trickster his whole life, growing rich by making up lies, misleading voters and generally being a scoundrel, a role Stone relishes. He says what he does is legal and is “perfectly legal” exercise of his First Amendment free speech rights.

Until Friday Stone had said again and again that he would never testify against Trump.

Indeed, Trump tweeted just that on Dec. 3, 2018, quoting Stone: “I will never testify against Trump.”

But when Stone walked out of the Florida courthouse Friday, released on $250,000 bond, Stone spoke in nuanced terms.

The television networks, the big newspapers and every other news report we’ve seen or heard reported that Stone said he would never testify against Trump. But like a politician whose stump speech never varies until the pol wants to signal a change in position, Stone didn’t speak in such unqualified terms on Friday.

“There is no circumstance whatsoever under which I will bear false witness against the president, nor will I make up lies to ease the pressure on myself.”

Those words sent a reassuring message to Trump, who Stone hopes will pardon him should he be convicted. Donald is not a detail man, He operates from simple terms, unable to grasp may subtleties. To Trump, those words were just like those Trump tweeted about in December—that Stone is still 100% loyal.

But the conditionals in Stone’s remarks will not go unnoticed by Robert Mueller, the special prosecutor investigating Russian interference in the 2016 presidential election. Mueller is a man with a finely developed mind who grasps the subtlest of subtleties.

To Mueller, those words may well be read as indicating that Stone could be open to spilling the beans and telling the truth about Trump.

Also, notice the conditional “if” that Stone used in his comments on ABC’s “This Week” on Sunday, two days after he was arrested.

“If there’s wrongdoing by other people in the campaign that I didn’t know about—which I know of none—but if there is, I would certainly testify honestly.”

As I read it, the Friday and Sunday remarks are subtle signals to Mueller that Stone might turn on Trump for the right deal. Stone is facing up to 20 years in prison if convicted. That is a daunting penalty for a 66-year-old man, a virtual life sentence.

But by flipping on Trump, Stone might get out in a year or three to resume his famously hedonistic lifestyle.

A host of former federal prosecutors has told reporters in detail that a conviction is a slam dunk if Stone goes to trial given the emails released with the indictment that show Stone knowingly lied to Congress. That’s why his carefully couched words on Friday and Sunday are important.

Mueller isn’t interested in lies. He needs truths, deeply hidden truths about what went on between Trump and the Kremlin spymasters who have been courting him for more than three decades.

Mueller needs facts to build any case against the president, his grown children, his son-in-law and others. And those facts must be corroborated by other witnesses, documents, emails and other information.

Faced with dying in prison or getting out in a year or three, expect Stone will flip unless he is absolutely sure Trump will rescue him with a pardon. Given how mercurial Trump is that’s a high-risk bet.

And don’t miss that Stone himself says the testimony sought from him is about Trump.

Stone says nothing improper went on between him and Donald. Maybe, in fact, the crimes Mueller has already identified were done through intermediaries.

Both men are known to work through intermediaries to maintain deniability for their conduct. Donald has likely used his son Don Jr. and his son-in-law Jared Kushner while Stone has used another Mueller indictee, the fabulist Jerome Corsi.

For a prosecutor like Mueller that’s not a big problem to get around. Good prosecutors know how to deal with crime via third parties. And Mueller is not just good. He is as good as it gets.