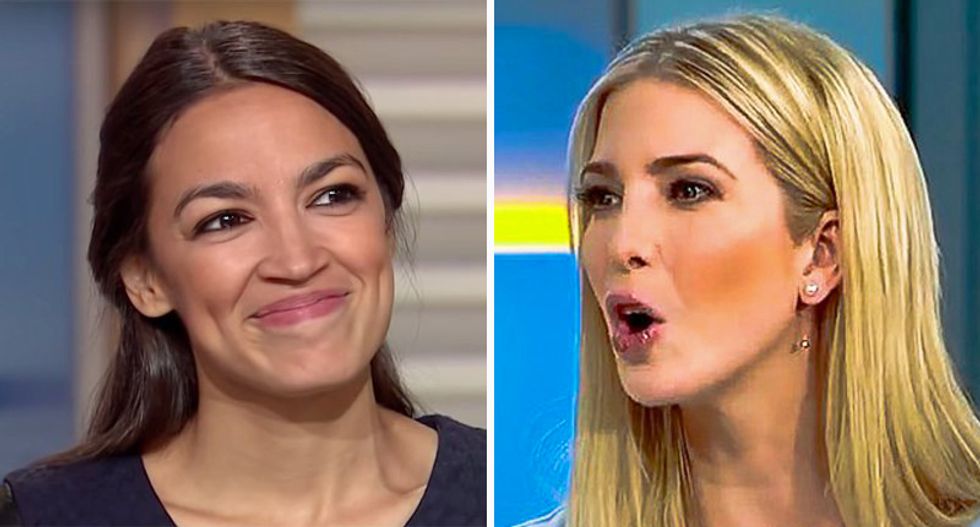 The Washington Post took a look at the ongoing battle between Ivanka Trump and Alexandria Ocasio-Cortez on Thursday.

The newspaper's Molly Roberts trashed the first daughter for her recent Fox News interview in which she said Americans did not, “in their heart, want to be given something” and instead wanted to work.

Roberts quipped "much like Ivanka Trump has...basically never done," in her opinion piece.

She then went on to note "we already knew Trump was entitled, and we already knew she lacked either the self-awareness or the will to recognize that entitlement in any meaningful way."

"The virulence and volume of the lashing out against this latest display of obliviousness make more sense when you consider not only what she was criticizing, but also who she was criticizing: Trump was using the jobs guarantee as a proxy for the Green New Deal, and the Green New Deal, for those interested in the politics side of policymaking, is often a proxy for Ocasio-Cortez," she continued.

The writer then cast AOC as a sort of anti-Ivanka, aka a woman who actually has worked real jobs and knows what it is like to pull yourself up by your bootstraps via a regular job.

"Ocasio-Cortez has become an avatar of Democratic resurgence," Roberts wrote. "She grew up working-class and made her way — winning international science fairs, waiting tables, tending bar — to her upset last summer in the primary for her congressional seat....the odds were mostly stacked against her: as the child of an immigrant, as a woman of color."

But "she beat them," Roberts wrote, "and she wants others to have the chance to beat them, too, but in a fairer fight."

Then the writer lamented that Republicans have resorted to lies and half-truths to try and bring down Cortez because she represents the relatable America in a way Ivanka simply can't.

"Republicans are so immersed in their own lemonade-stand ideology that their response has been not to raise themselves to Ocasio-Cortez’s level by arguing that they have also earned what they have and want to let everyday citizens do the same," she wrote. "Instead, it has been to lower Ocasio-Cortez to theirs by pretending that she has not earned anything at all," Roberts said.

The Huntington Beach, California "White Lives Matter" rally turned violent when two white guys slugged it out on the sidewalk in front of a police car during the event.