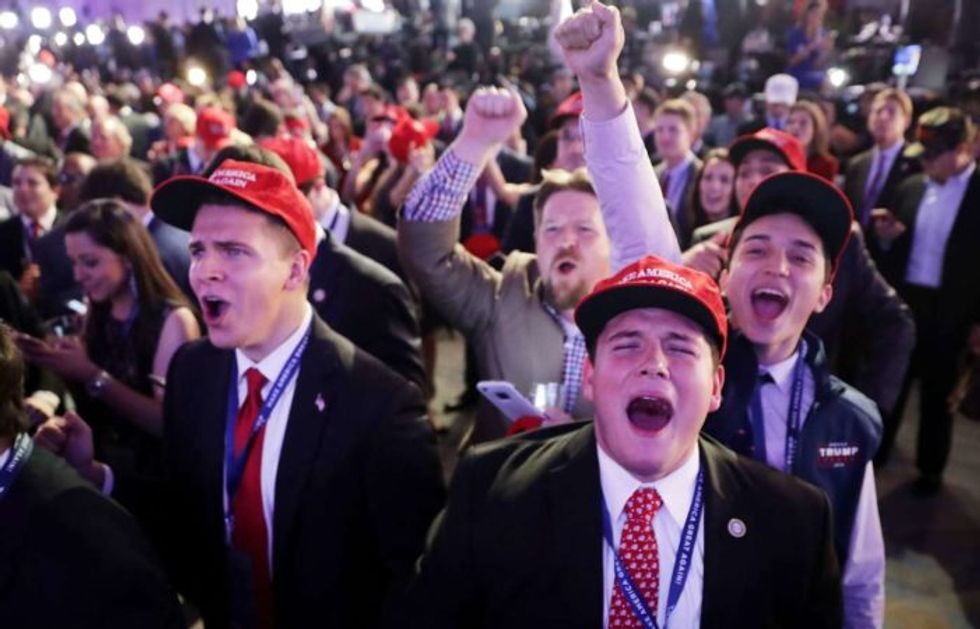 Last week during a rally in the border city of El Paso, Texas, before thousands of his most adoring fans, Donald Trump showed America and the world–again–who he really is. Trump worked his audience up into a fever pitch as he lambasted and threatened the news media and free press. For Trump and his movement, they are the “enemy of the people.” This is a fundamental principle of authoritarianism. One of Trump’s MAGA hat-wearing supporters responded to the president’s incitement by physically attacking a BBC cameraman named Ron Skeans.

During the same speech, Donald Trump lied about his imaginary wall along the U.S.-Mexico border and about “illegal immigrants” who come to America in order to commit crimes against white people. He spun vainglorious stories out of whole cloth about his “accomplishments” and “greatness.”

Donald Trump’s values and beliefs may appear incoherent, but they are not a buffet or à la carte meal from which a person can pick and choose from. Rather, they are a nasty, incestuous knot that cannot be easily untangled. Ultimately, to wear Donald Trump’s MAGA hats or his other regalia is to share and endorse his racism, sexism, nativism, bigotry and anti-social behavior. To utter the words “Make America Great Again” with no sense of irony or foreboding is to announce one’s betrayal of human decency and distrust of democracy.

How do Trump’s MAGA hats and other clothing and slogans help to create a sense of political community for his followers? Is “Make America Great Again” an implicit threat against nonwhites, Muslims and others that he and his followers deem to be a type of enemy Other? Does Trumpism represent larger cultural battles in America about the role of academics, teachers, intellectuals and other experts in public life? Should Trump’s supporters be held morally accountable for their political decision-making and the harm that they are causing to American society?

In an effort to answer these questions I spoke with Matthew A. Sears, an associate professor of classics and ancient history at the University of New Brunswick. Sears’ essays have also been featured by the Washington Post and the History News Network. His most recent column for the Washington Post is “Why the decision to wear MAGA hats matters.”

This conversation has been edited for clarity and length.

Professors and other educators who speak out about the threat to democracy embodied by Donald Trump and his movement have been victims of a coordinated campaign of threats and violence — including being fired from their jobs. Trumpism and the American right have birthed a type of new McCarthyism and anti-intellectualism in America. As a professor who studies literature and history, and also writes for a popular audience, how has that impacted you?

I don’t know if it is “anti-intellectual” per se, in the spirit of what we saw in fascist Italy or with the Khmer Rouge, the latter being an obvious and odious example. But there is certainly a kind of battle royale taking place between different kinds of intellectuals in America and the West.

There are people like [white nationalist leader] Richard Spencer who try to give themselves an air of academic respectability. These types try to claim that their positions are actually well-thought out, well-researched and well-sourced. They are trying to piggy-back on academic prestige.

There is the so-called “intellectual dark web.” These are all academics or academic-adjacent people. Jordan Peterson and Brett Weinstein, even Steven Pinker increasingly, and people like Richard Dawkins and Sam Harris can be included in that group.

This is a battle for the soul of public discourse and who gets to claim expertise on certain areas. Given my expertise and public voice, I am part of a public debate and fight over keeping or getting rid of “traditional” ideas of Western civilization and arguments and beliefs such as “The West is Best.”

As a classics professor who talks about, writes about and teaches about the Greeks and the Romans, for many of the “alt-right” or “alt-lite” I am often seen as a traitor. Why? Because I research and show how those societies were complex, problematic and different from our own. Studying ancient Greece and Rome can show us ways of how not to act and how not to organize a society. These “alt-right” and “alt-lite” types say I am “ruining” Western civilization and I’m “ruining” the classics because I don’t engage in hero worship where I say things like, “Look at these great founders of democracy, and look at these heroes like Achilles and Julius Caesar and these great men.”