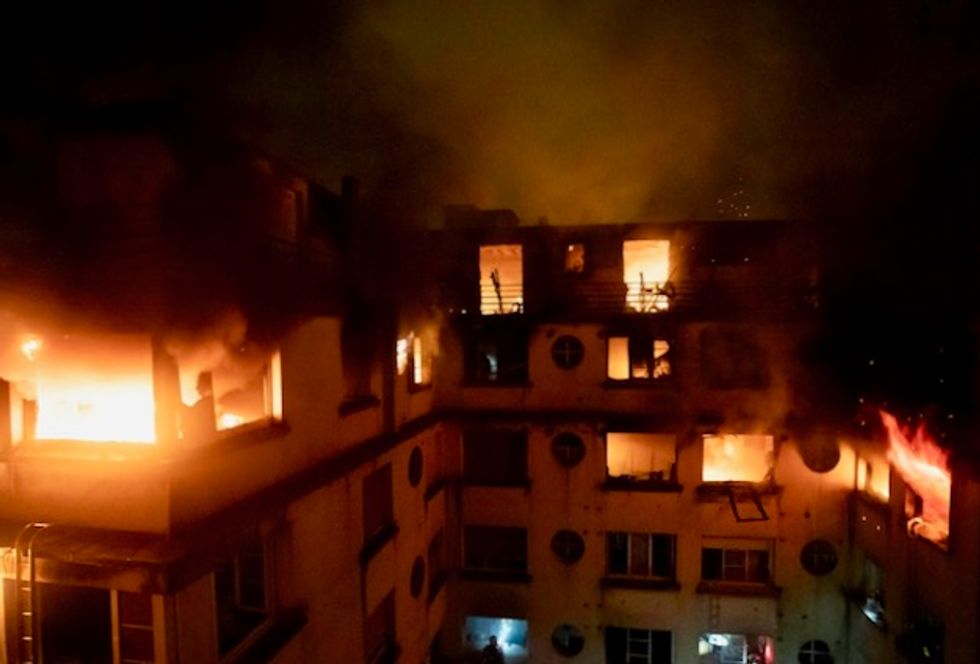 At least 10 people died and 30 were injured in an overnight blaze at an apartment block in Paris that police are treating as possible arson, officials said Tuesday.

The fire on the upper floors of the building in the rue Erlanger in the upmarket 16th district of southwest Paris is the most deadly in the capital since 2005.

Videos from the scene showed flames leaping out of top floor windows and firemen climbing flimsy ladders to rescue terrified residents, some dressed only in pyjamas, from the top of the eight-storey block.

Described by one rescue worker as a "scene of incredible violence", the blaze left around 30 people -- including six firefighters -- injured and at least 10 people have died, the fire service said.

"One person who lives in the building has been arrested. She's a 40-year-old woman who has prior psychological problems," Paris prosecutor Remy Heitz said from the scene on Tuesday where smoke could still be seen rising from the area.

An investigation has been opened into the criminal charge of causing death by arson amid fears that the toll could climb further.

The fire started at about 1:00 am (0000 GMT) and was only brought under control more than five hours later by around 200 firefighters.

"At first we thought it was a fight, we could hear a woman screaming really loud," a local resident who gave his name as Nicolas told AFP.

"She was screaming, screaming and we went outside and the building was already on fire. The firemen had just arrived but what was amazing was that they were completely impotent.

"They had the trucks, the big ladders, but they couldn't do anything," he said.

BSPP - Brigade de sapeurs-pompiers de Paris/AFP / HO The fire started at about 1:00 am and was finally brought under control more than five hours later by around 200 firefighters

Only once they had fitted extenders to their equipment, which needed to be carried manually into the courtyard of the building, were they able to begin rescue operations.

Several times the blaze appeared to have been brought under control before starting again, another witness told AFP.

"The building was very difficult to access," the mayor of the 16th district, Daniele Giazzi, told BFM television as she paid tribute to the young rescue workers who had toiled through the night.

Several local residents said that the fire had been started because of a dispute between neighbours in the block, which was built in the 1970s unlike many of the older, classic Parisian buildings.

"We'll let the police give further information, but it's one of the possibilities being examined by investigators," deputy mayor of Paris Emmanuel Gregoire told RTL radio.

Another local resident, 46-year-old builder Jose Emilien, was standing at a police cordon anxiously seeking news of his cousin and nephew who lived on the sixth floor of the building.

"I called both of them," he told AFP. "They're not picking up and I don't have any news."

The wealthy neighbourhood is home to several private schools and lies on the edge of the vast Bois de Boulogne park.

It is close to the stadium of football club Paris Saint-Germain, the Parc des Princes, and the Roland Garros complex used for the French Open tennis tournament.

"France is waking up with emotion after the fire on the rue Erlanger in Paris," President Emmanuel Macron tweeted. "Thoughts for the victims. Thank you to the firefighters whose courage helped save many lives."

The fire is the most deadly since 2005 when an arson at a building in the 13th district of the city killed 17 people, including 14 children.

Fire service spokesman Captain Clement Cognon told AFP that firefighters were yet to fully search the upper floors of the block.

"We had to carry out many rescues, notably for around a dozen people who had taken refuge on the roofs. In total about 50 people were evacuated by firefighters," he added.

Two adjacent buildings were also evacuated as a precaution and local officials were on site to help find housing for residents who could not return to their homes.

Several streets were still cordoned off by police and fire crews on Tuesday morning.