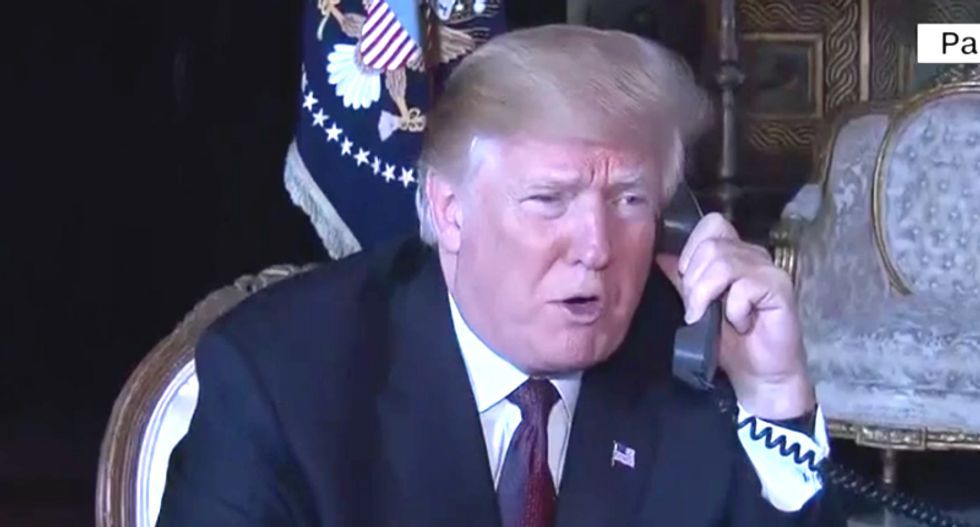 Donald Trump on the phone (screengrab)

President Donald Trump does not use computers, but will pick up the phone to call conservative lawmakers, The Washington Post reported Tuesday.

"The chatterbox in chief has eschewed the traditional way that presidents communicate with members of Congress, calling lawmakers at all hours of the day without warning and sometimes with no real agenda," The Post explained. "Congressional Republicans reciprocate in kind, increasingly dialing up the president directly to gauge his thinking after coming to terms with the fact that ultimately, no one speaks for Trump but Trump himself."

One of the lawmakers who chats on the phone is Sen. John Barrasso (R-WY).

“I just feel comfort in calling President Trump. He calls me regularly to talk about issues," Barrasso said. "He’s always helpful for both of us.”

Trump's habit of watching cable news drives many of the calls.

"Other times, he talks about what he just saw on television or asks about golf. Barrasso said their calls, usually about 10 minutes or so, span several topics and sometimes are prompted by a Barrasso appearance on cable television or a Sunday political talk show," The Post reported. "The president’s penchant for trying to contact senators after watching them on television has forced his aides to scramble at times — White House officials who are unsuccessful reaching senators directly will often then track down their aides to say the president wants to talk."

President Barack Obama would schedule calls with an agenda instead of just calling to chat about golf or cable TV appearances.

The only Democrat listed in the article is conservative Democrat Joe Manchin of West Virginia.