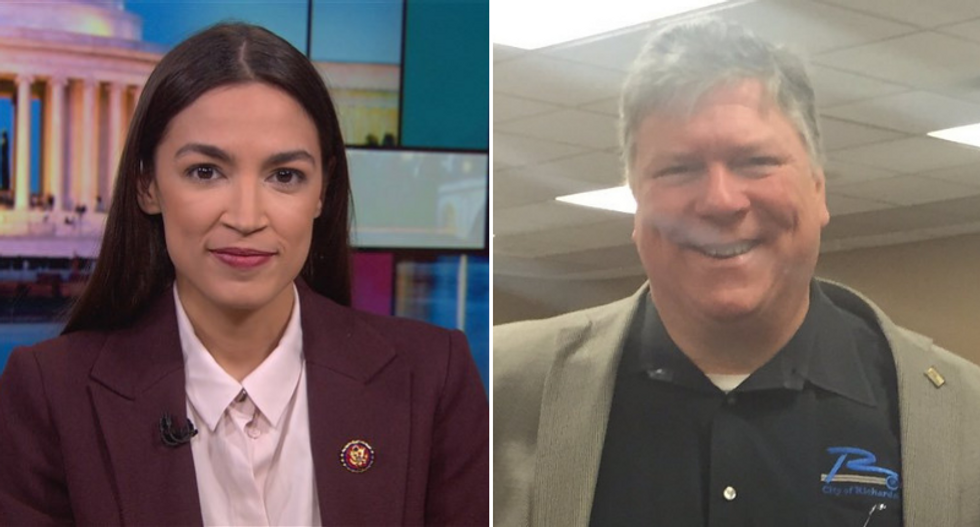 An elected Republican official in Texas called Rep. Alexandria Ocasio-Cortez (D-NY) a "bimbo" on Twitter — and subsequently deleted his account.

The Washington Post reported that Scott Dunn, a Richardson, Texas city council member, used the offensive term when responding to Rep. Ocasio-Cortez in a tweet.

"The embarrassment is to have bimbos like you with nothing between your ear [sic]," Dunn said in the since-deleted tweet, which was screenshotted and shared by Twitter users.

Because the tweet was deleted along with Dunn's account, it's unclear exactly what he was responding to. The Post noted, however, that on February 6, Ocasio-Cortez tweeted about President Donald Trump's State of the Union address, which she called an "embarrassment."

The Dallas Morning News reported that the Richardson council member claimed he was trying to defend Trump when he responded to the freshman Democrat.

The New York Daily News reported that in a Facebook post made on Friday, Dunn apologized for his remarks.

“The words I used were offensive,” the Republican's comments read. “I am responsible for my own words and actions. I apologize to anyone who finds what I said offensive.”

Mauri Long, a Richardson City Council candidate, wrote in her own lengthy Facebook post that she found Dunn's remarks to be "inappropriate, demeaning and divisive."