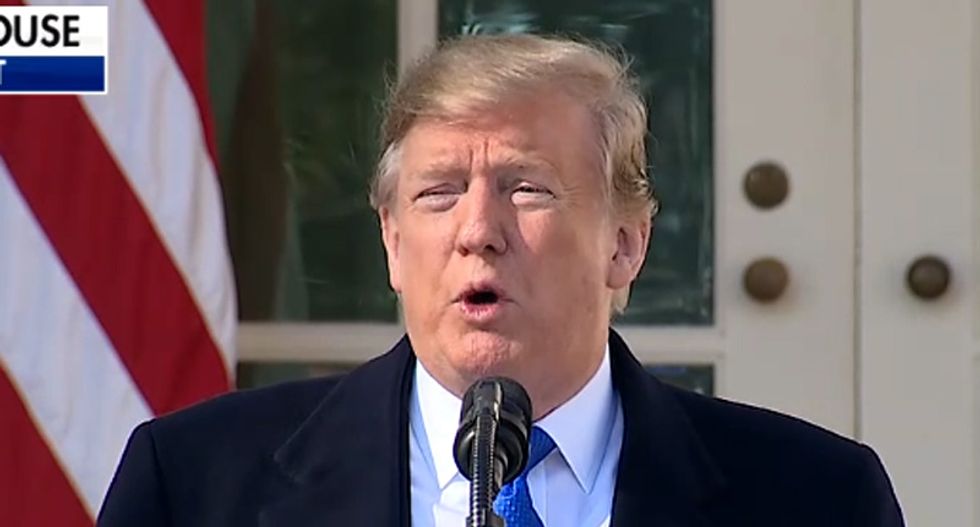 President Donald Trump on Friday announced that he would declare a national emergency to fund his border wall at the U.S.-Mexico border.

In a Rose Garden speech, Trump said his administration planned to confront the "crisis" on the border "one way or another."

Trump insisted that a wall was necessary for border security. America was facing "an invasion" of drugs, human traffickers, and criminals gangs, he claimed.

Senate Leader Mitch McConnell (R-KY) said Thursday he believed Trump would sign a bipartisan spending bill that passed the House and Senate, but that he would also declare a national emergency so he can reallocate funds to pay for his wall without Congressional approval.

Sen. Lindsey Graham (R-SC) warned Trump was aiming to declare a national emergency as well. Sure enough, the president made good on the pledge.

Speaker Nancy Pelosi (D-CA) warned against the move, telling Republicans it sets a precedent for any Democratic president to declare a national emergency when it comes to issues like gun violence.

“Want to talk about a national emergency, let’s talk about today, the one-year anniversary of another manifestation of the epidemic of gun violence in America,” Pelosi said in a press conference Thursday. “That’s a national emergency. Declare that an emergency, Mr. President, I wish you would. But a Democratic president can do that. So the precedent the president is setting here is something that should be met with great unease and dismay by Republicans and we respond accordingly when we review our options.”

The next likely move will be lawsuits questioning Trump's declaration of "emergency" and lawsuits over the separation of powers.

Trump was expected fly to his private golf club in Florida after declaring the emergency.