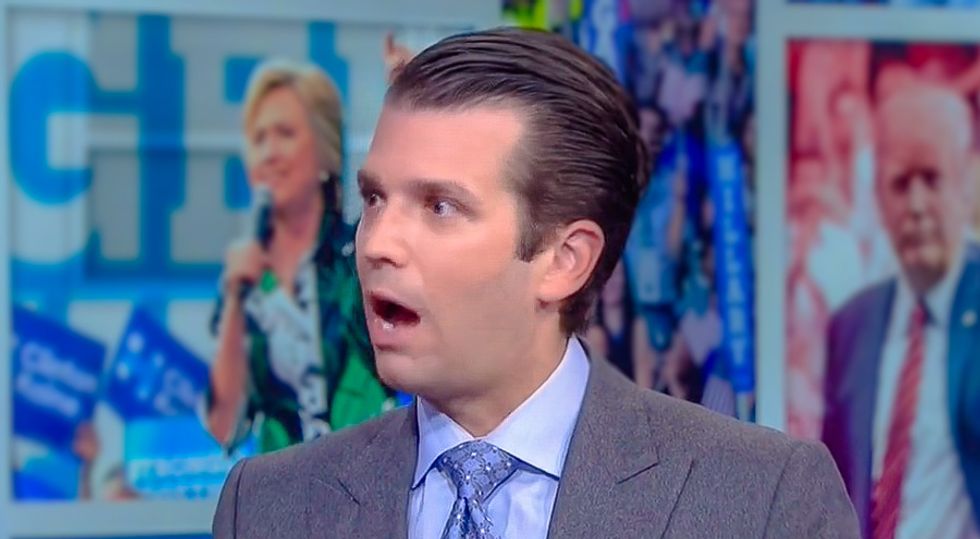 Internet users on Thursday enjoyed a laugh at the expense of Donald Trump Jr. after he angrily tweeted that his father had been subjected to an "attempted coup."

Trump Jr. made his remarks in response to reports that former acting FBI Director Andrew McCabe confirmed that members of the Justice Department discussed removing President Donald Trump from office.

"When is someone going to finally investigate the investators [sic]?" Trump Jr. asked. "If this isn’t and [sic] attempted coup I don’t know what is. Regardless of party if you’re not troubled by this, you’re part of the problem."

The tweet was immediately met with mockery. The misspelling of "investigators" only made matters worse.

@DonaldJTrumpJr The “investators” aren’t done yet. Shouldn’t you wait for Mueller’s report and your upcoming indictment before you opine?
— j jarrett (@j jarrett)1550156759.0

@DonaldJTrumpJr and to think that all this time we blithely assumed that Eric was the dumb one
— Jeff Tiedrich (@Jeff Tiedrich)1550157604.0

@DonaldJTrumpJr I see that your lack of spelling skills is genetic.
— Prillypants (@Prillypants)1550158481.0

@DonaldJTrumpJr I'm just shocked that the one word you managed to spell right was coup
— Lane Sorkin (@Lane Sorkin)1550157684.0