US ‘vowed’ to withdraw half its troops from Afghanistan, says Taliban 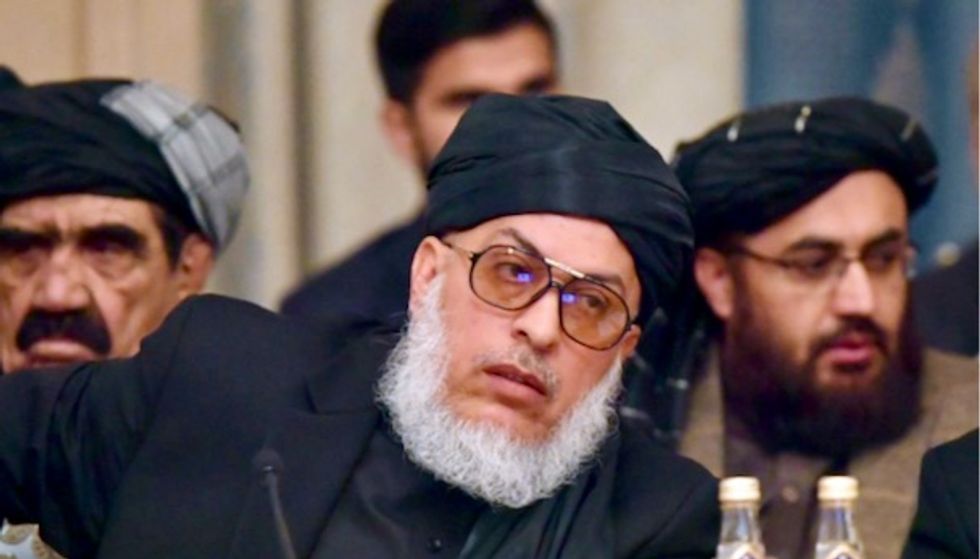 Yuri Kadobnov, AFP | Taliban spokesman Mohammad Abbas Stanikzai attends the opening of the two-day talks of the Taliban and Afghan opposition representatives in Moscow on February 5, 2019.

A senior Taliban official told reporters in Moscow on Wednesday that the US had vowed to withdraw half of its troops from Afghanistan by April. The US however has issued no details of a potential troop pull-out from the war-ravaged country

Speaking to reporters in the Russian capital a week after the Taliban held separate talks with US officials in Qatar, the Taliban’s deputy chief negotiator Abdul Salam Hanafi said the US had agreed to withdraw half their troops from Afghanistan by the end of April.

"The Americans agreed to withdraw half of their troops immediately. The withdrawal will start from February 1 and continue until end of April," Hanafi told reporters in Moscow.

But the US special envoy to Afghanistan, Zalmay Khalilzad, who led the US side at the talks in Doha, Qatar, has repeatedly stressed that "nothing is agreed until everything is agreed. 'Everything' must include an intra-Afghan dialogue and comprehensive ceasefire".

The US has issued no details on any potential withdrawal plan.

Afghan government not represented at talks

The Afghan government was not represented at both the talks in Doha and Moscow, sparking fears among many Afghans that a hasty pullout of US troops would once again plunge the war-ravaged country into a brutal civil war.

Debate: What future for Afghanistan without US troops?

The absence of Afghan government representatives at the talks have underscored the Taliban's hostility toward Afghan President Ashraf Ghani’s increasingly marginalised administration in Kabul.

The Taliban has instead sat down at the table in Moscow with Ghani’s main rivals, including Afghan politicians and warlords-turned-politicians who were once sworn enemies of the hardline Sunni Islamist group.

The second day of peace talks in Moscow began hours after US President Donald Trump used his State of the Union address to stress the importance of accelerated talks with the Taliban to end the longest of America's "endless wars".

Trump offered no specifics about when he would bring home the 14,000 US troops in Afghanistan but said progress in negotiations with the Taliban would enable a troop reduction and a "focus on counter-terrorism".

Asked about Trump's speech, a Taliban official in Moscow told Reuters that all foreign troops in Afghanistan must leave.

"At the first step, we want all the foreign forces to leave and end the military presence in our country," said Sohail Shahin, a spokesman for a Taliban office in Qatar. "But after ending their military presence, their non-military teams can come and we need them too, they can come and take part in the reconstruction and development process," he added.

Taliban slams ‘indecency’ in ‘the name of women’s rights’

Taliban officials have used the extraordinary exposure at the Moscow talks to detail their vision of Afghanistan after a US troop withdrawal.

Lead Taliban negotiator Sher Mohammad Abbas Stanikzai told reporters that the movement did not want to rule alone but as part of "an intra Afghan Islamic system of governance ... in consultation with all Afghans".

He also reiterated the Taliban's opposition to Afghanistan's constitution, calling it "illegitimate" and maintaining that it should be based on "Islamic principles, national interests, historic pride and social justice".

Stanikzai further demanded the removal of Western sanctions and travel bans on Taliban members, prisoner releases, an end to "propaganda" against the Taliban and clearance to open an official office.

On the critical issue of women's rights, Stanikzai said the Taliban were committed to all rights of women "that have been given to them by the sacred religion of Islam".

In a statement released Tuesday, the Taliban stated that, "Islam has given women all fundamental rights, such as business and ownership, inheritance, education, work, choosing one's husband, security and the right to good life."

But the lengthy statement also warned that, “Under the name of women [sic] rights, there has been work for immorality, indecency and circulation of non-Islamic cultures. Dissemination of western and non-Afghan and non-Islamic drama serials, paving way for immoral crimes, and encouraging women for violating Afghan customs are other instances that have been imposed on Afghan society under the name of women rights.”

In a bid to assuage fears of a US cave-in to the Taliban, US Secretary of State Mike Pompeo spoke with Ghani in Kabul late Tuesday.

Ghani's call to Pompeo seemed an attempt to re-assert his government's role in negotiations he has sharply criticised as one-sided.

Robert Palladino, deputy spokesman at the State Department, said Pompeo reaffirmed the US commitment to achieving a lasting peace. Pompeo also emphasised the importance of an intra-Afghan dialogue and the inclusion of the Afghan government in peace talks with the Taliban, according to Palladino.

Ghani tweeted that Pompeo "stressed that our military partnership is unwavering and will remain until a lasting and inclusive peace is achieved". Ghani said that Pompeo also "underscored the central importance of ensuring the centrality of the Afghan government in the peace process" and signaled support for holding Afghan presidential elections in July.

"We both agreed that words, rumors, and speculations cannot replace actions and that our partnership and resolve will remain strong in the pursuit of peace," Ghani tweeted.

I spoke to Secretary Mike Pompeo (@SecPompeo) over the phone this evening. Reiterating the stance and commitment… https://t.co/laYHGoPz1k
— Ashraf Ghani (@Ashraf Ghani) 1549389891.0