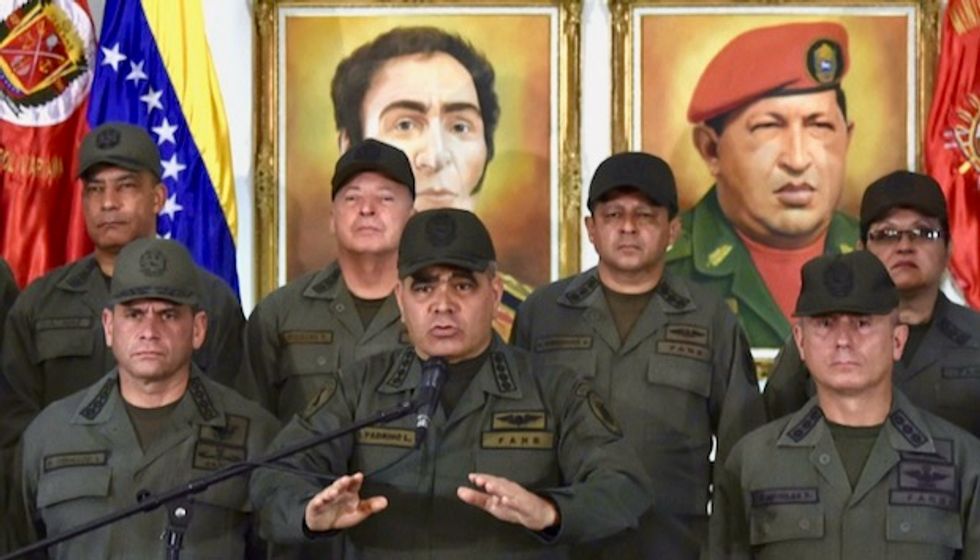 Venezuela's military reaffirmed its support for embattled President Nicolas Maduro on Tuesday and said they were on "alert" for border violations following threats by US President Donald Trump who urged them to back opposition leader Juan Guaido.

"The armed forces will remain deployed and on alert along the borders ... to avoid any violations of territorial integrity," said Defense Minister Vladimir Padrino, reading out a statement in a public appearance alongside top commanders.

"We reiterate unrestrictedly our obedience, subordination and loyalty" to Maduro, he added.

Maduro, 56, faces calls to quit as his country struggles with shortages of food and medicine.

The military high command has so far maintained its public backing for Maduro -- seen as key to keeping him in power.

Guaido, leader of the Venezuelan legislature, has declared himself acting president and is appealing to military leaders to switch allegiance to him.

He posted a series of tweets calling by name on senior military leaders commanding border posts to abandon Maduro, whom he has branded illegitimate over the socialist leader's disputed reelection last year.

He is backed by the United States and some 50 other countries.

- Maduro or the homeland -

The United States has sent food and medical aid for Venezuela, currently stockpiled over the border in Colombia, but the military has so far refused to let it enter the country.

Last week, Guaido said the aid would enter Venezuela this coming Saturday, regardless of the military opposition.

Bringing in aid is crucial to Guaido's challenge to Maduro's authority.

The 35-year-old has offered military commanders an amnesty if they abandon Maduro.

On Tuesday, he sent an identical Twitter message to 11 generals saying: "On February 23 you have to choose between serving Maduro or serving the homeland. Let in the humanitarian aid."

Trump has refused to rule out US military action in Venezuela. He raised the pressure on Monday, issuing a warning to the Venezuelan military.

He told them that if they continue to support Maduro, "you will find no safe harbor, no easy exit and no way out. You will lose everything."

Maduro's government says the aid is a smokescreen for an invasion.

If foreign powers try to help install a new government by force, they will have to do so "over our dead bodies," Padrino said.

Although sitting on the world's biggest oil reserves, Venezuela is gripped by a humanitarian crisis.

It has suffered four years of recession marked by astronomical hyperinflation that the International Monetary Fund says will reach 10 million percent in 2019.

An estimated 2.3 million Venezuelans have left the country since 2015.

Guaido says 300,000 people face death without the aid but Maduro denies there is a humanitarian crisis.

Padrino said the military would not be "blackmailed" by "a pack of lies and manipulations" and accused Trump and Guaido of portraying "supposed humanitarian aid" as a clash between the armed forces and the people.

Maduro announced on Monday that 300 tons of Russian aid would reach Venezuela on Wednesday. He previously announced the arrival of aid from China, Cuba and Russia, his main international allies.

The military has placed freight containers and tankers across the Colombian border bridge the aid would need to cross.

Guaido urged supporters to write to the 11 generals "from the heart, with arguments, without violence, without insults," expressing why they should support the opposition.

The army previously announced a "special deployment plan" for the 2,200-kilometer (1,370-mile) border with Colombia.

Besides shortages of basic necessities, Venezuelans face failing public services such as electricity, water and transport.

The opposition has plans to open two more aid collection centers this week in Brazil and the Dutch island of Curacao, just off Venezuela's northern coast.

Guaido has already enlisted the support of 700,000 people to help bring in the aid on Saturday, but has said he wants a million to have signed up by then.

On Tuesday he thanked France, Britain, Italy, Spain and Germany for pledging "more than $18 million for the humanitarian aid."

France has also sent 70 tons of medicines and food.

Maduro has dismissed the humanitarian assistance as "crumbs" and "rotten and contaminated food," while laying the blame for economic hardship on US sanctions.

The government also said on Monday it will stage a concert on the Colombian border Friday to Saturday, when Richard Branson has said he will hold a pro-aid concert just over the frontier.