Venezuela's Guaido: 'We will do what is necessary' 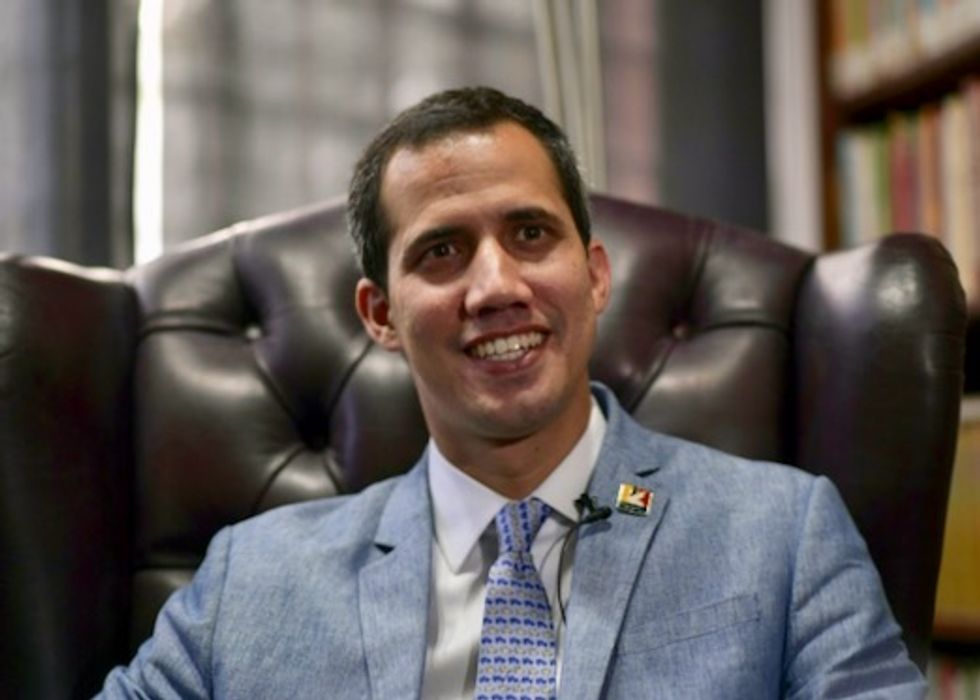 Guaido has declared himself interim president and has been recognized as such by dozens of countries, but Maduro, buoyed by support from the armed forces, has declined to step aside.

In an interview with AFP, Guaido discusses the entry of foreign aid, contact with the military and whether he would be willing to allow the highly-controversial step of foreign military intervention.

-Question: Would you use your prerogatives as speaker of the National Assembly and acting president to authorize the intervention of foreign military forces?

"We will do everything possible, once again, this is obviously a very, very controversial subject, but making use of our sovereignty and, within our jurisdictions, we will do what is necessary."

-Question: How is the entry of humanitarian aid advancing?

"When we have sufficient supplies, we are going to make a first entry attempt. We know that there is a blockade in Tienditas (on the border with Colombia)."

"The armed forces have a huge dilemma, whether or not to accept the aid. It would be almost miserable at this point of huge necessity not to accept it."

-Question: When will the first attempt be?

"I think it's going to be next week, when we have formed the corps of volunteers and organized the distribution process."

-Question: Why do you think the offer of amnesty for members of the military has not yet produced a massive defection from high command?

"We have to go deeper into that, we saw a division general speak openly a few days ago, we saw some sergeants of the National Guard show discontent and they are being tortured."

"Part of what we have to overcome is explaining very well that (the armed forces) have a role in the reconstruction."

-Question: Have you had contact with officials from Russia and China (which are allies of Maduro)?

"I am sure that Moscow and Beijing know the situation in Venezuela really well: Maduro doesn't have the popular support and he can't stabilize the economy, which produced the world's largest inflation of two million percent."

-Question: Would you receive emissaries of the International Contact Group seeking a negotiated solution?

"We are ready to talk with everyone, with a very specific agenda."

-Question: Does the position of Pope Francis seem lukewarm?

"He did not receive anyone from the government, he does not even take them into account anymore."

Multiple people were injured in Gallup, New Mexico, this Thursday when a pickup truck plowed through a parade for the Intertribal Ceremonial Centennial Celebration, CNN reports.

The driver and a passenger were taken into custody at the scene and police are now investigating the incident. The parade was part of a days-long celebration of Native American culture and heritage, according to a news release.

Clark Kauffman, Iowa Captial Dispatch
Two Iowans criminally charged in the Jan. 6, 2021, insurrection at the U.S. Capitol are arguing in court that they acted in self-defense and are the victims of selective prosecution.

Salvador Sandoval Jr. of Ankeny, and his mother, Deborah Sandoval of Des Moines, are facing charges that include with entering and remaining in a restricted building; disorderly and disruptive conduct in a restricted building; disorderly conduct in a Capitol Building, and parading, demonstrating, or picketing in a Capitol Building.

Monkeypox vaccines: A virologist answers 6 questions about how they work, who can get them and how well they prevent infection

Monkeypox isn’t going to be the next COVID-19. But with the outbreak having bloomed to thousands of infections, with cases in nearly every state, on Aug. 4, 2022, the U.S. declared monkeypox a national public health emergency. One reason health experts did not expect monkeypox to become so widespread is that the U.S. had previously approved two vaccines for the virus. Maureen Ferran, a virologist at Rochester Institute of Technology, has been keeping tabs on the two vaccines that can protect against monkeypox.

1. What are the available monkeypox vaccines?

Two vaccines are currently approved in the U.S. that can provide protection against monkeypox, the Jynneos vaccine – known as Imvamune/Imvanex in Europe – and ACAM2000, an older smallpox vaccine.