Welcome to the 2020 Festival of Hate: A presidential primary like no other starts too early and too hot 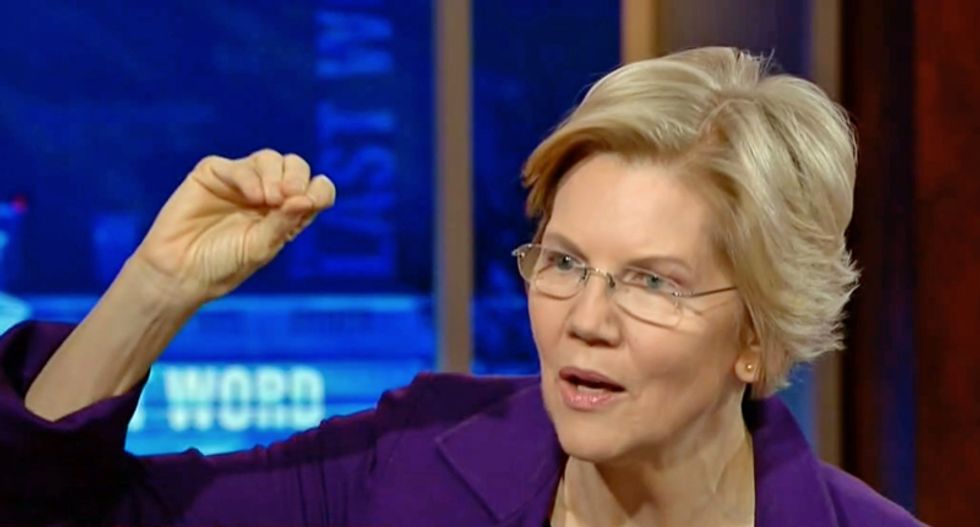 Sen. Elizabeth Warren on MSNBC (screengrab)
Over the last few weeks, America has experienced the unofficial beginning of the 2020 presidential campaign. This is distressingly and depressingly early, to be sure, but may in some sense be a sign of democratic renewal: This part of the campaign used to occur in private, at cocktail parties in Manhattan and Beverly Hills. It has not been an edifying spectacle. Electoral politics is always intensely competitive, of course, in terms of ideology, personality and semiotics. There’s nothing new about that. And the similarity between a presidential candidate’s campaign announcement and a new product launch isn’t new either, and didn’t start with What’s His Name and the golden escalator. (A history-shaping, and intelligence-crushing, event that did not occur until June of 2015, let us note.)

But there’s something different this time around. Or rather, everything is different and all of us are sort of grinding around in the dark, like bumper cars at a netherworld amusement park in a horror movie, with no idea what dangers lie ahead. Every one of the 17 Democrats or independents openly considering running against President Trump — I guess that number is an exaggeration, but we will soon reach that, and surpass it — has been greeted with a one-day burst of media attention, followed by relentless slagging from the begrudgers and know-it-alls who prefer someone else, and are eager to demolish the newly-announced candidate as a fraud, phony, sellout and closet bigot who either enabled Trump in the first place or will surely lead to his re-election.

Do I actually need to cite examples? We can’t possibly cover them all, and you may need to remind me about incidents I’m forgetting.

We could certainly go on: Rep. Tulsi Gabbard of Hawaii didn’t even get her one day of sunlight before being effectively mocked back into the shadows. I’m not eager to defend Gabbard, exactly — to put it delicately, she’s kind of a weirdo — but it’s striking that while all sorts of economic and social justice ideas are now on the table, total opposition to U.S. militarism is still outside the Overton window. Sen. Sherrod Brown of Ohio, a purported progressive, may have trolled himself by apparently backing away from Medicare for All. Pete Buttigieg, the mayor of South Bend, Indiana -- a gay Rhodes scholar and Afghan War veteran -- is being floated as the sort of left-Trumpian outsider who could sweep the table, which is a classic case of a journalistic narrative without an audience. Richard Ojeda, a former state senator in West Virginia, launched his campaign by telling everybody he had voted for Trump. Well OK then!

Most of the so-called moderates who may show up, including Joe Biden and Montana Gov. Steve Bullock and former Colorado Gov. John Hickenlooper and various other genial white men with Oxford shirts and vaguely rustic demeanors, are hanging back for now. Can you blame them? Maybe they think they can show up after the wildfires have burned down a little and be the proverbial adults in the room, telling everyone to grow up and be reasonable. It’s queasy-making to say this, but that’s probably Biden’s best shot (and the other guys don’t matter). But Uncle Joe is a reliably terrible candidate, love him or hate him; his time in the barrel, to quote the estimable Roger Stone, is coming.

This early-season festival of hate is full of opportunities and dangers: It could lead to the dramatic reinvention of the Democratic Party, in the wake of its 2018 midterm victories. Or it could lead to a catastrophic implosion, as with the zombie takeover of the other so-called major party in 2016. It also could (and this is exceptionally likely) result in an unhappy compromise that puts off the big ideological battles for another day. One of the most important details in all the pseudo-narratives and pissing contests and balloon-popping listed above is that activists, party insiders and social media addicts have no idea what the vast majority of Democratic voters — who don’t follow every twist and turn of the meta-narrative, and won’t start paying attention until the Iowa caucuses, a full year from now — really want, or what course they are likely to follow.

As I perceive it, claiming no high-minded or neutral perspective — but absolutely not seeking to boost any of the dozens of announced or likely candidates — the party is being pulled in two directions at once, both politically and psychologically. On one hand, Democrats seem eager to accelerate the whole process as much as possible, as if by magical thinking they can get Donald Trump out of office before January of 2021. One the other, they can’t resist fighting the old internal battles of 2016 — and by extension, the battles of 2008 and 2004 and 1992 and maybe 1972 — all over again. The party’s base agrees on two things: We must find a candidate who will absolutely, positively destroy Trump, and we must purge all the infidels and traitors who endanger that. How to do those things? That’s where, to put it mildly, the agreement falls apart.

If we can take half a step back, as near to impossible as that is, the contours of the Trumpified political landscape begin to come into focus. They don’t make much sense. On one side we have a weakened, embattled and widely despised president, a would-be tyrant with a core of loyal followers who is perceived by almost everyone else as dangerous, deeply corrupt, staggeringly ignorant and quite likely delusional. In that situation, it would be logical to expect a charismatic opposition leader to emerge who represents or embodies a coherent alternative vision of the nation’s future.

But there is no such coherent alternative vision, and no such opposition leader. (Along with everyone else who pays even the slightest attention to politics, I have noted that Alexandria Ocasio-Cortez — my congresswoman! — is several years too young to run for president.) I don’t know whether this campaign will end in redemption or disaster or just more unsatisfactory muddling-through. I do know it will be like no other in American political history, and the stakes couldn’t be higher. Which is why everybody is acting so crazy.