Who’s pulling the strings behind Trump’s national emergency declaration to build his wall? Yup. This guy. 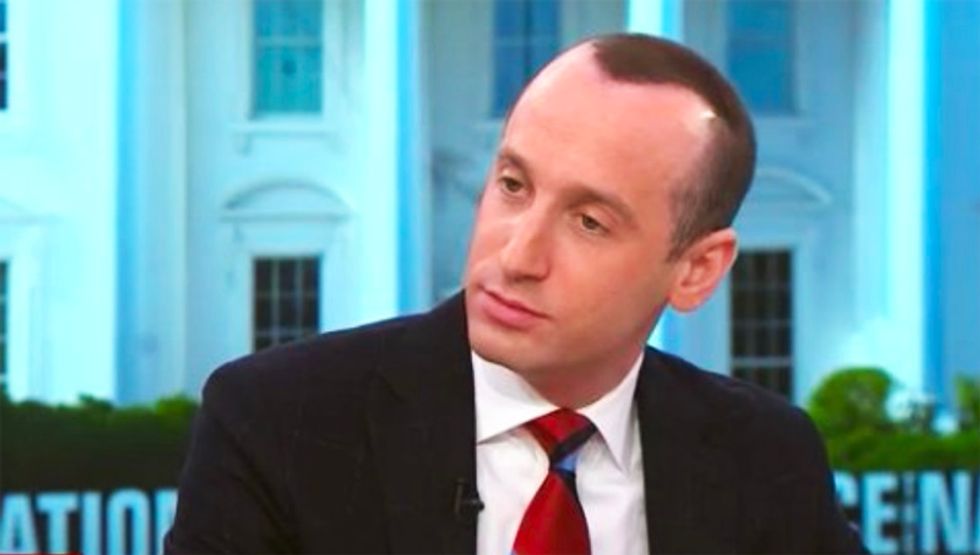 "The powers of the president to protect our country are very substantial and will not be questioned," Miller infamously said in 2017

It should come as no surprise that Senior Advisor to the President Stephen Miller is the man pulling the strings behind President Donald Trump's Friday morning declaration of a national emergency to build his wall on the Southern border between the U.S. and Mexico.

In a Friday morning conference call before the President's address in the Rose Garden announcing his national emergency, Miller reportedly explained to supporters and surrogates some of the details, in typical Miller fashion.

Miller's early public role in the Trump administration, many remember, was a fevered declaration all his own. Two years and two days ago, Miller stood in the familiar but now rarely used James S. Brady Press Briefing Room in the White House and uttered these chilling words:

"The powers of the president to protect our country are very substantial and will not be questioned."

Miller has been labeled a "fascist," "Waffen-SS," a "racist ghoul," and a "white supremacist."

Back in the White House Press Room in 2017, Miller's "will not be questioned" remarks referred to Trump's Muslim ban, which, indeed, was questioned, and rejected by federal judges time and time again, until it was remade into something that would pass muster with the courts.

Miller that same week two years ago claimed Trump's Mexican wall would pay for itself.

Miller is also the official behind the Trump administration's intentionally cruel and punitive "zero tolerance" policy of ripping untold thousands of migrant children at the border from their parents' arms, many of whom will never be reunited.

He called it a "simple decision."

TIME congressional correspondent Alana Abramson reports "Stephen Miller told supporters" on a conference call Friday morning "that people would be 'shocked' by the speed with which the WH will build the wall."

Washington Post White House reporter Josh Dawsey adds that Miller, along with Acting Director of the Office of Management and Budget Russ Vought, and others, had a call "with surrogates" to "sell" the national emergency "deal."

Dawsey says that an "effort is being made to keep California from having jurisdiction to sue," according to Stephen Miller, and that most of the "action will be in Texas. He reports that "Trump will 'veto' any move to block declaration."

At about 10:40 AM Friday morning, President Trump began his remarks by talking about China and North Korea – which he has not labeled national emergencies, despite that both countries do actively threaten American democracy.

TRUMP ADMINISTRATION LIED ABOUT NUMBER OF KIDS IT SEPARATED AT THE BORDER – MAYBE BY THE THOUSANDS: REPORT