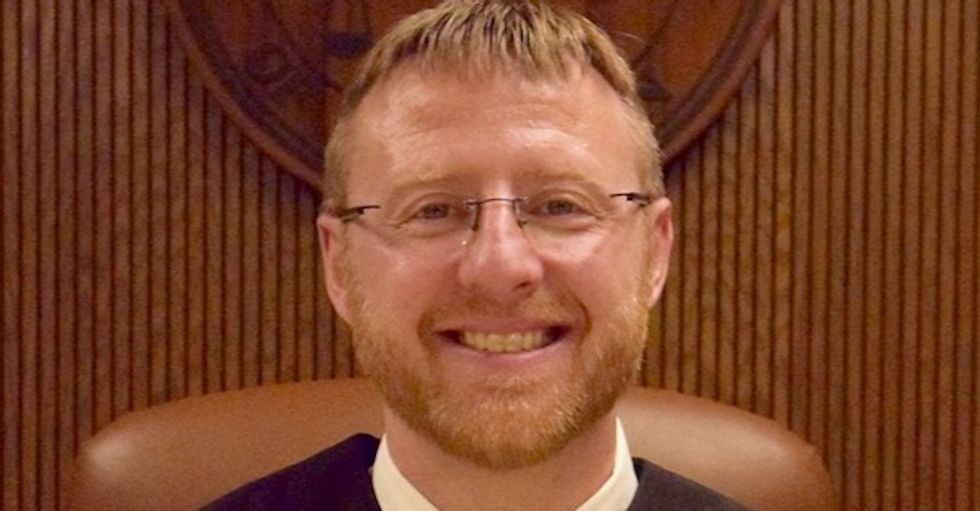 A conservative candidate running for a seat on the bench of the Wisconsin State Supreme Court has been exposed for his anti-LGBT activism that spans more than a decade.

Brian Hagedorn is a state appeals court judge who was appointed by then-governor Scott Walker. Last month it was revealed he had kept a blog during his law school years in which he "twice wrote that a landmark gay rights ruling by the U.S. Supreme Court striking down a Texas anti-sodomy law could lead to the legalization of bestiality, sex with animals, in America," The Milwaukee Journal-Sentinel reported.

"'The idea that homosexual behavior is different than bestiality as a constitutional matter is unjustifiable," Hagedorn falsely wrote in October 2005. "There is no right in our Constitution to have sex with whoever or whatever you want in the privacy of your own home (or barn)."
Now Hagedorn is under fire after it was revealed that one year after he became a judge on the state Appeals Court, he founded a Christian prep school that bans same-sex relationships.

Augustine Academy's "statement of faith says the school community believes that 'Adam and Eve were made to complement each other in a one-flesh union that establishes the only normative pattern of sexual relations for men and women, such that marriage ultimately serves as a type of the union between Christ and his church,'" the Journal-Sentinel reports.

That's not the only aspect of Hagedorn's anti-LGBT activism.

Hagedorn for several years has been paid thousands of dollars to give speeches to an anti-LGBT legal organization that appears on the Southern Poverty Law Center's list of active anti-LGBT hate groups.

The hate group, Alliance Defending Freedom, wants to criminalize homosexuality, likens homosexuality to pedophilia, and has worked to have transgender people sterilized, according to the Wisconsin State Journal.

ADF has a portfolio of Christian cake bakers and florists who are claiming a right to refuse service to marrying same-sex couples. Among them is Jack Phillips, who won a very narrow ruling at the U.S. Supreme Court last year.

The Wisconsin State Journal also reveals that Hagedorn's college blog posts "contended that gay pride month at his workplace was 'homosexual propaganda' that created 'a hostile work environment for Christians.'"