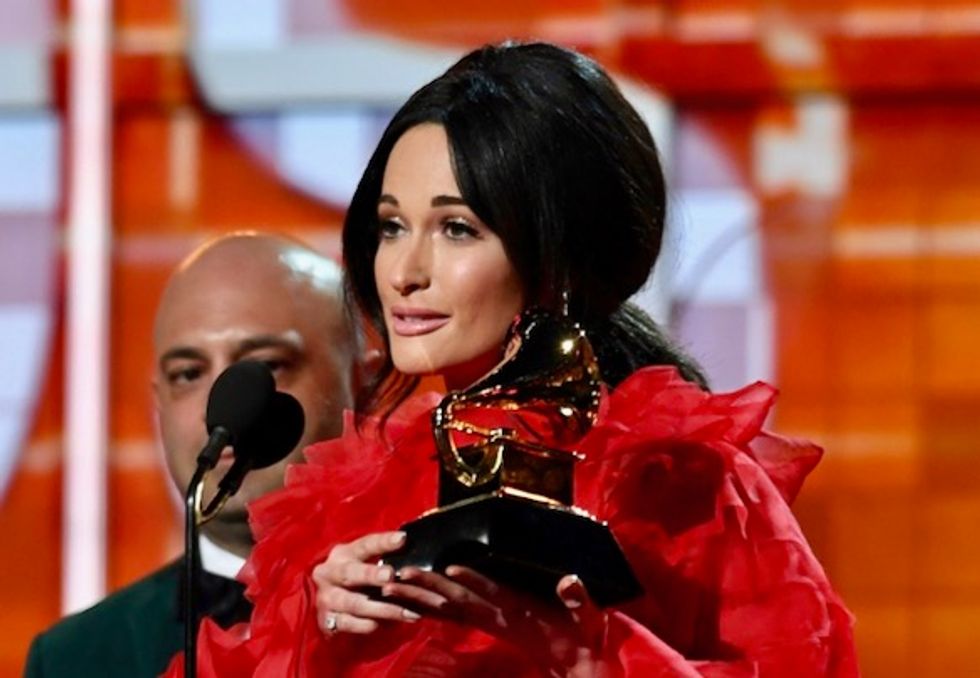 A bold streak of feminism ran through the Grammys gala on Sunday, as women artists dominated in the competition and on the concert stage -- while rappers Cardi B and Childish Gambino delivered a history-making night for hip-hop.

Gambino -- the musical alter ego of actor Donald Glover -- posted four big wins for his provocative hit "This Is America," but did not attend the star-studded ceremony in Los Angeles.

In any event, the night belonged to the ladies.

One year after they were largely snubbed in major categories, and the head of the Recording Academy sparked outrage for telling them to "step up," they made their presence felt -- and heard.

Country star Kacey Musgraves, one of the genre's most critically praised artists who infuses her classic twang with psychedelia, nabbed four prizes including an upset win for top Album of the Year honors for "Golden Hour."

"I think that women have a really necessary perspective to art, to music and it's really nice to see that getting a chance to be included," Musgraves told journalists after the show.

"It takes women having the balls to put out art that might not always be liked by everyone, but it also takes people on the other side of that to reach out and give those things a chance to be heard."

"I guess this year we really stepped up," she said.

And rap's woman of the moment Cardi B certainly put her art out there -- she made history as the first solo woman to win a Grammy for Best Rap Album for her debut "Invasion of Privacy."

The trembling star, fresh off a rousing performance of her hit "Money," delivered an emotional speech alongside her husband Offset of the rap trio Migos about making the album in the early days of her pregnancy.

Gambino's win marked the first time a rap track won either Song of the Year, which honors best songwriting, or the Record of the Year award for best overall song.

Musgraves' third studio album bested a crowded field of heavyweights for top honors including rappers Kendrick Lamar and Drake -- both of whom ended the night with just one win each.

Gambino and Lamar skipped the ceremony, but Drake showed up -- and the Toronto rapper vented his frustration over a common complaint in recent years, that black hip-hop artists are not always given their due.

"We play in an opinion-based sport, not a factual-based sport," Drake said as he accepted his lone award for Best Rap Song for his inescapable "God's Plan."

"This is a business where sometimes it is up to a bunch of people that might not understand what a mixed race kid from Canada has to say."

Host Alicia Keys got the show at the Staples Center off to an emphatic start when she introduced a few of her friends -- including former first lady Michelle Obama.

Obama delighted the audience when she came on stage alongside Keys, Lady Gaga, Jennifer Lopez and actress Jada Pinkett-Smith to deliver a strong message about diversity and female empowerment.

Brandi Carlile -- this year's most nominated woman -- won her first three Grammys ever, in the Americana and American Roots categories.

"Tonight gives me hope as a mother of two young daughters," she told journalists backstage.

Pop diva Gaga -- sporting an off-the-shoulder silver number with a bold ruffle and thigh-high slit -- meanwhile won an award for Best Pop Duo/Group Performance for her heart-pounding hit "Shallow" from the blockbuster film "A Star Is Born."

The song also won in the visual media group, and Gaga scored a third trophy for best pop solo performance for "Joanne."

"I'm so proud to be a part of a movie that addresses mental health issues," said a tearful Gaga, who thanked her co-star and duet partner Bradley Cooper.

"A lot of artists deal with that. And we got to take care of each other."

AFP / Robyn Beck US singer-songwriter Janelle Monae performs at the Grammys, which opened with a clear message -- women rule

The night struck a positive note that some change may be afoot at the Recording Academy, which has faced intense backlash over its apparent struggle to embrace diversity.

Pop futurist Janelle Monae wowed the crowd with an edgy performance backed by an entourage of female dancers, dropping the line of the night: "Let the vagina have a monologue."

And Lady Gaga delivered a stunning rendition of her hit "Shallow" -- in a decidedly Gaga-esque bejeweled catsuit and sky-high disco boots.

She performed a rollicking medley of classics on two pianos, while country legend Dolly Parton took the stage with Miley Cyrus, Katy Perry and others after being honored for her musical and philanthropic contributions.

Disco legend Diana Ross performed a birthday tribute to herself before Jennifer Lopez wowed with an exuberant ode to Motown that included inflections of salsa.

Keys ended the feel-good show with a line to match: "Let's keep listening and loving each other."