Yale psychiatrist: Trump is increasingly divorced from reality and scrambling to prevent an emotional collapse 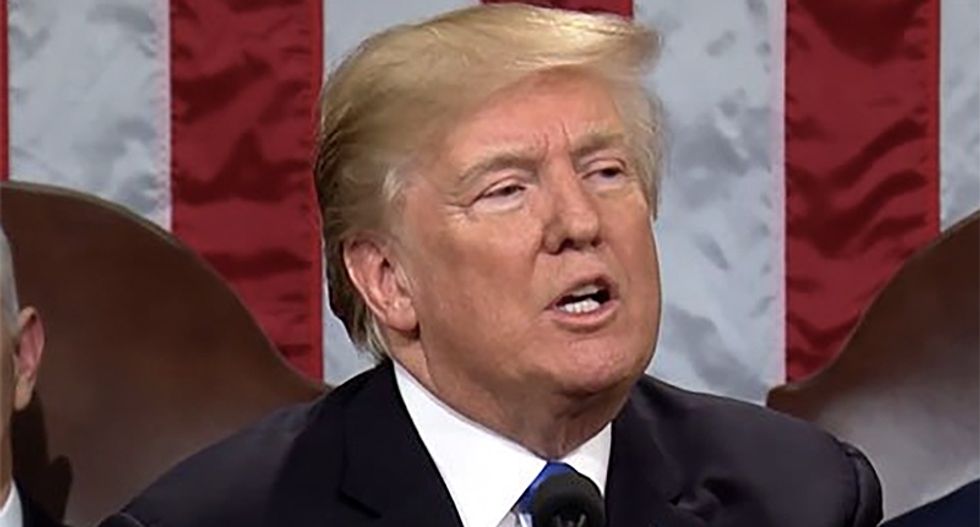 Last year, President Donald Trump was the first president to take a cognitive exam as part of his physical fitness test.

The president had then-White House Dr. Ronny Jackson publicize the results of the test: the president reportedly scored 30 out of 30 on the Montreal Cognitive Exam.

But some mental health professionals are not convinced that the president is fully functioning mentally.

Dr. Bandy X. Lee is a Yale psychiatrist who has worked in public health and violence prevention policy through the World Health Organization. In 2017, she edited The Dangerous Case of Donald Trump: 27 Psychiatrists and Mental Health Experts Assess a President. The book was an instant New York Times bestseller. Dr. Lee was recently appointed president of the World Mental Health Coalition, an organization of thousands of mental health professionals from around the world. She says that many are concerned about the president’s mental health. Her views are her own, not Yale's official positions.

Tana Ganeva: In your opinion, is his mental health being properly vetted?

Dr. Bandy X. Lee: There has been no word about a mental health exam, which is concerning. His condition has grown worse since last year, when there was great concern about his mental health. So on top of his personal mental health deteriorating, we have the added complication of the population habituating to what Dr. Robert Jay Lifton, who wrote the foreword to our book, called a “malignant normality.”

In other words, instead of the afflicted person getting better, the family members (the nation) have grown worse and have come to accept the abnormal as normal—we see this a lot with patients who go untreated. In a society, no matter how hard we try not to “normalize” pathology and not to get drawn into distortions of reality, it is almost impossible.

Look at how we are sending thousands of troops to the southern border and separating little children from families without plans to reunite them—not to mention the threat of war in Venezuela and Iran, the reignited nuclear arms race, and the climate catastrophe that is busily denied rather than confronted. This is how psychological dangerousness turns into geopolitical dangerousness in a high office.

What he received last year, instead of a valid mental health exam, was the White House emergency-room physician and rear admiral Dr. Ronny Jackson’s falsely reassuring a worried public based on a 10-minute dementia screen.

This screen, called the MoCA or Montreal Cognitive Assessment, was not an appropriate test for declaring his employer and commander-in-chief “absolutely fit for duty.” Since studies revealed that patients clinically diagnosed with Alzheimer’s Disease and hospitalized schizophrenia patients could score up to 30 out of 30 points, an Alzheimer’s research consortium recommended that the MoCA not replace a full neuropsychiatric exam.

What he needed—and what I hope he gets this year—are a full history by someone with training in mental health and a battery of standardized tests, such as the MMPI or Minnesota Multiphasic Personality Inventory, Wisconsin Card Sorting Test, the California Verbal Learning Test, the Stroop Test, and the WAIS or Wechsler Adult Intelligence Scale. An MRI or magnetic resonance imaging and an amyloid PET or positron emission tomography scan of the brain are probably appropriate, given his symptoms and his family history.

Dr. Jackson was previously removed from being the president’s personal physician and from his nomination as Veterans Affairs secretary after allegations of misconduct (including disturbance of a female employee) and malpractice (dispensing controlled substances improperly).

Even though he is still under Pentagon investigation, Mr. Trump has called him back for a position of chief medical adviser just days before his annual exam. Since Dr. Jackson failed to declare his conflicts of interest or the limits of his training in order to perform a faulty exam the first time, it is unclear what influence he will have on the second exam. So to answer your question—no, the president’s mental health is not being properly vetted at all, but the opposite: blatant abnormalities that even lay people can see are being covered up in dangerous ways.

Tana Ganeva: What signs are Trump exhibiting that make you think he's suffering from a mental health crisis?

Bandy X. Lee: The signs are quite obvious now: Mr. Trump is increasingly divorced from reality, his lies are accelerating, and he is resorting to more extreme measures to distract himself and others from the pressures he is facing—mainly Robert Mueller’s investigation, his losses to the Democrats, and his diminishing popularity.

However, this is not just a personal mental crisis but a national public health and international security crisis. A most vivid depiction of his mental crisis is his “irrational” wall. You might say that he is trying to achieve two things: trying to steady himself through the image of concrete barriers, and trying to contain his “base”, which is beginning to slip away.

When one’s internal, ego boundaries are not well-formed (for example, a parent could have seen the child as no more than his extension or an instrument of his fulfillment, and so the child never grows up to be a person of her own right), one will search for external boundaries to prevent emotional collapse.

Grasping at an increasingly primitive, concrete “wall” may be a reflection of feeling that the world is falling apart. The requirement that the country needs to close down its borders, despite evidence such as the El Chapo trial that a wall would not help drug smuggling, is an indicator of one’s inner experience. This “sense” of the world as a menacing place will not go away, even if we built a wall, since it is coming from within. What such a person needs is therapy, and the first treatment for dangerous individuals is containment—even if they fight you and will never admit it, dangerous individuals often feel safe when you contain them because of how they feel out of control.

Tana Ganeva: Do you see any positive signs?

Bandy X. Lee: Do you mean signs that he is improving? It is not very reassuring, but things can get better after they have grown worse and blown up. For some people, this is the only way they will improve, since they never seek treatment themselves. But with the power of the presidency, we may not survive to see the whole process. This is why the president’s mental health exam is urgent and long overdue.

Tana Ganeva: What should lawmakers do?

Bandy X. Lee: Lawmakers can recognize that this is a mental health issue and nothing else (Mr. Trump is not in a state where he can go beyond the defects that impair him). They will be hampered in dealing with the situation effectively unless they view it correctly, and for this they need to consult mental health experts. Forensic psychiatrists, such as myself, encounter Mr. Trump’s psychology almost daily, and being informed about well-known patterns will help reduce a lot of uncertainty, confusion, and exhaustion.

Tana Ganeva: What is the role of mental health care professionals?

Bandy X. Lee: We are available for consultation. We also have a primary duty to society, just as we do to patients. We can recognize dangerous signs before danger happens, and, like law enforcement, we are legally permitted and liable to act on the evidence.

It is very rare for mental health professionals to intervene in the political domain, but just because we are not used to it doesn’t mean we should try to maintain merely the appearance of professionalism by pretending we do not see what we do.

There is a track record of White House physicians covering up presidents’ conditions in ways that have harmed the nation, with Dr. Jackson being only the latest. If Woodrow Wilson’s physician informed people better about his impaired thinking from several “small strokes,” the Treaty of Versailles with Germany and the League of Nations may have turned out differently.

If F.D.R.’s physicians were clear about his heart failure and cerebral vascular disease, we may have made better provisions to stand up to Stalin at the Yalta Conference. If Ronald Reagan’s physician had required that he delay his resumption of presidential powers after cancer surgery, he might have escaped the embarrassing Iran-Contra scandal.

CIA psychiatrist Dr. Jerrold Post, who contributed to our book’s second edition, has documented how presidents themselves receive poor medical care because of their high office. To screen for fitness for duty properly, we need an independent body that is as apolitical and nongovernmental as possible—and that is what we are in the process of forming through the World Mental Health Coalition, an expert panel to be available for consultation whenever there is doubt about presidential fitness.

We are recommending fitness tests for all presidential and vice-presidential candidates to come.