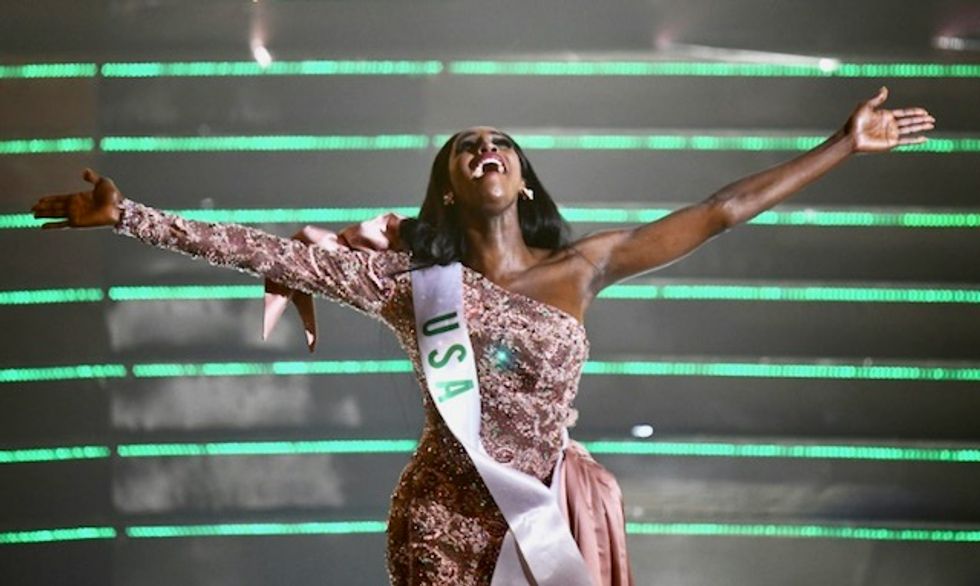 Contestant Jazell Barbie Royale, a community leader and HIV activist, edged out 19 other candidates from around the world AFP / Jewel SAMAD

American contestant Jazell Barbie Royale was crowned "Miss International Queen" in Thailand on Friday at a beauty pageant for transgender women, becoming the first person of colour to win the competition since it started in 2004.

Royale buried her face in her hands, spread her arms in victory and welled up with tears when news of the victory was announced in the seaside city of Pattaya.

The community leader and HIV activist edged out 19 other candidates from around the world including Brazil, Peru and several Asian countries.

She said she hoped her triumph inspired other people of colour around the world who might say "if she can do it, I'm coming to Miss International Queen next year and I'm going to compete".

Hailing from Florida, Royale said she wanted to use her newfound platform to educate others about the importance of HIV testing, safe sex and medical care.

"There are a lot of living with HIV but don't go to get treatment," she said.

The theme for this year's contest was world equality.

Royale's victory in Thailand came as the Trump administration back home tries to stop transgender recruitment in the military, a battle being waged in the courts.

She said that if she had to send a message to Trump she would tell him "please don't run for next term".

Before the show, aspiring Miss Queens took selfies, glanced in the mirror for a final look or sat still as stylists put the finishing touches on their makeup and hair.

AFP / Jewel SAMAD Contestant Kanwara Kaewjin comes from Thailand, which has a more visible and empowered transgender community compared to its neighbours

Host country Thailand has a more visible and empowered transgender community compared to its neighbours.

The first transgender candidate for prime minister made headlines this month ahead of March 24 elections.

But same-sex marriage is still not legally recognised in the country and discrimination persists.

The Miss International Queen pageant has been hailed for offering contestants a chance to bond with others from around the world.

Thailand's relatively open-minded attitude on LGBT issues is a welcome break for contestants who hail from less tolerant countries, including Malaysia, where anti-LGBT rhetoric has picked up in recent months.

An opposition leader said last year that a quake-tsunami that killed thousands in neighbouring Indonesia was "punishment from Allah" for the activities of gay people.

"Some of the LGBT community in Malaysia, they don’t have work, home nor family because the family cannot accept them," Jassinta said.