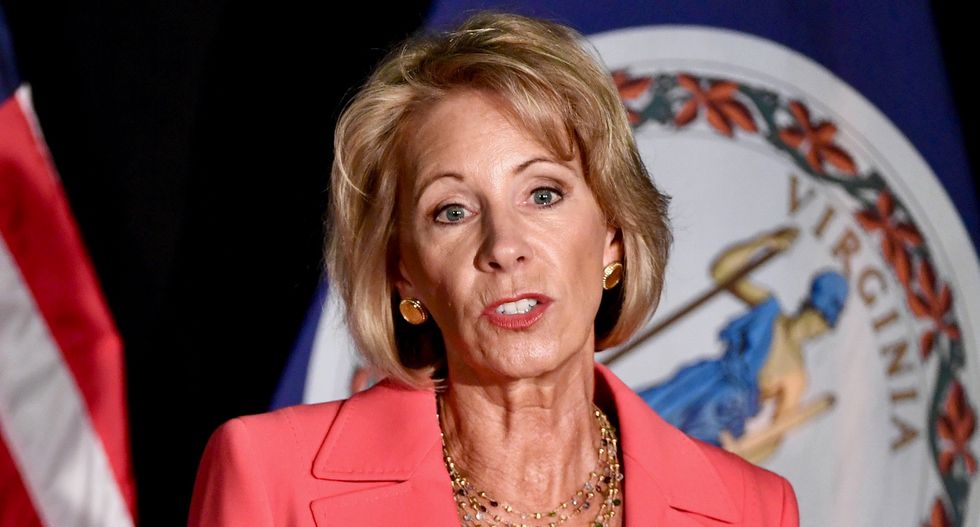 Secretary of Education Betsy DeVos has been touring the country to promote her plan to hand over billion of dollars in federal tax credits to dramatically expand the number of students attending private schools, religious schools, or even being homeschool. The program, part of a bill in Congress, would be funded through private donations in exchange for tax credits. In other words, tax dollars would effectively be paying for the program, as those dollars will have to be made up by taxpayers.

Secretary DeVos' "Education Freedom Scholarships" program would continue the Trump administration's blurring of the lines between church and state. Just last week Sec. DeVos announced the Dept. of Education will no longer ban religious organizations from being funded with taxpayer dollars for secular projects.

The Dept. of Education claims up to $5 billion annually could be allocated, but Senator Ted Cruz (R-TX), who spoke at an event with DeVos to roll out his bill to support the program (video below), said it would be $10 billion.

The reception in Sec. DeVos' stop in Iowa appeared less than enthusiastic.

The paper notes that Waterloo Community Schools’ Superintendent Jane Lindaman was "the lone public education representative invited to participate," and described her as being "concerned."

“I was surprised by the imbalance of people at this meeting today,” Lindaman told The Courier. “Out of 14 people, I was the only public school advocate. I quickly realized the responsibility and, quite honestly, the burden of speaking for the hundreds of thousands of kids who are in public education in Iowa.”