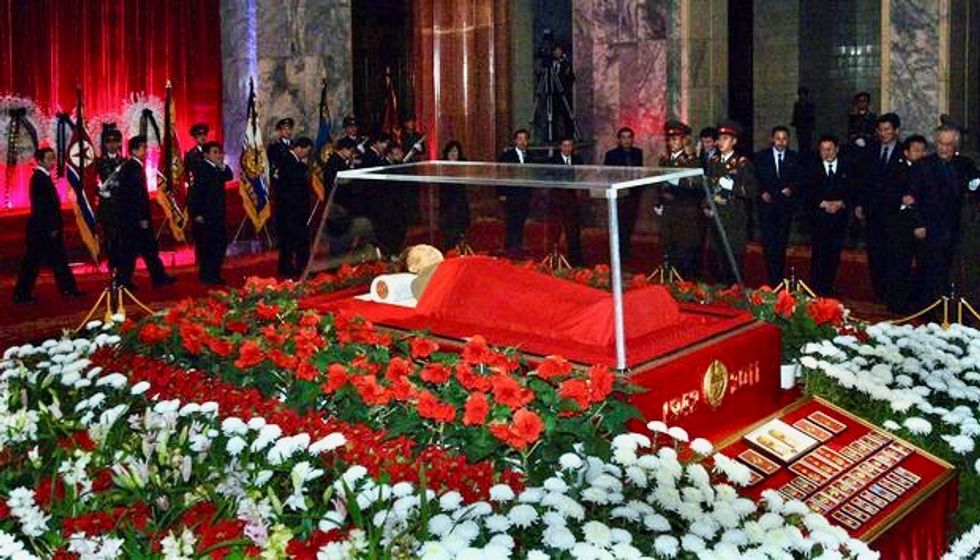 Perhaps none of the communist legacies shared by Vietnam and North Korea highlighted during Kim Jong Un’s “goodwill visit” to Hanoi is stranger than the embalmed leaders on display in their capital cities, and the secretive team of Russian technicians that keeps the aging bodies looking ageless.

Kim laid a wreath outside Ho Chi Minh’s mausoleum in the Vietnamese capital on Saturday, after the conclusion of his shortened summit with U.S. President Donald Trump.

Inside the dark interior of the mausoleum, the embalmed corpse of Vietnam’s founding father lies displayed in a glass coffin for a steady stream of tourists who silently shuffle by.

In Pyongyang, Kim Jong Un’s grandfather and father are on similar display in the loftily named Kumsusan Palace of the Sun, a monument to the cult of personality that surrounds North Korea’s ruling family.

All three leaders were originally preserved by a team of specialists from the so-called “Lenin Lab” in Moscow, which first embalmed and displayed Vladimir Lenin’s body in 1924.

The Soviet Union may have collapsed, and socialism in both Vietnam and North Korea has taken on forms barely recognizable to the ideology’s first thinkers, but that same lab still performs annual maintenance on Ho, and according to at least one researcher, still helps North Korea keep the Kims looking fresh.

“The original embalming and the regular re-embalmings have always been conducted by the scientists of the Moscow lab,” said Alexei Yurchak, a professor of anthropology at the University of California, Berkeley, who is writing a book about the embalmed communist leaders. “Over the years they trained local scientists in some techniques, but not all, maintaining the core of the know-how secret.”

Unlike earlier preservation processes such as mummification, the permanent embalming pioneered by Soviet scientists kept the bodies flexible, with unblemished skin and a lifelike, if rather waxy, pallor.

With North Vietnam under regular attack by American warplanes at the time of Ho’s death in 1969, the Soviet Union airlifted chemicals and equipment to a cave outside Hanoi, which the Soviet experts turned into a sterile lab, Yurchak said.

When the Soviet Union collapsed in the 1990s, the government lab faced a funding crisis, leading it to rely more heavily on offering services to foreign clients, Yurchak said.

Among those customers was North Korea, where Russian specialists embalmed both Kim Il Sung and Kim Jong Il at a laboratory built into the mausoleum in Pyongyang.

“Every one-and-a-half to two-years, these bodies are re-embalmed by the Moscow scientists,” Yurchak said, citing interviews he conducted with lab scientists and his own field research.

The website for the committee that manages Ho’s mausoleum says Russia started charging for the chemicals after the Soviet Union collapsed, prompting Hanoi to ask that the supplies be produced in Vietnam. Vietnam has also sent technicians to study in Russia and can now handle the operations of the mausoleum by itself, the website says.

A source with committee, however confirmed the monument is closed every year for two months and that Russian technicians help with annual maintenance of the body.

When contacted by Reuters, the mausoleum lab in Moscow, which since 1992 has been known as the Center for Scientific Research and Teaching Methods in Biochemical Technologies, declined to comment on any aspect of its work.

The North Korean delegation at the United Nations did not respond to a request for comment.

Researcher Tom Fowdy, who founded a group promoting tourism and cultural engagements in North Korea, said he has seen the Kumsusan Palace closed for unexplained “renovations”, but maintenance of the bodies is a mystery.

“While it is obvious the methodology was derived from Russia, it will be a closely kept secret,” he said.

Some experts say China, which relied on its own scientists to embalmed Mao Zedong because of tension between Beijing and Moscow at the time, may have taught or helped North Korea.

Visitors to Pyongyang’s Kumsusan Palace pass displays that include Kim Jong Il’s personal yacht and an Apple computer the dictator had once owned, before being required to bow three times to the bodies.

“The personality politics of the Kims exceeds all others,” Fowdy said, noting that maintaining the memorial will continue to “receive overwhelming priority” in North Korea’s government budgeting.

It’s not clear how much impoverished North Korea spends on maintaining the Kims’ bodies. When Moscow released preservation costs for the first time in 2016, it reported spending nearly $200,000 that year to maintain Lenin.

Originally the embalming was seen as a way of joining the various countries to international communism, as embodied in Lenin.

But as Vietnam and North Korea developed in their different political ways, so has the meaning attached to preserving the leaders’ bodies.

“Today this original meaning of these bodies has changed – in Vietnam the body of Ho today stands for anti-colonial struggles for independence and even for new nationalism, much more than for communism,” Yurchak said. “In North Korea the two Kims’ bodies stand for a self-sufficient country organized around one leader and existing in the face of the ‘imperialist surroundings.’”

Reporting by Josh Smith. Additional reporting by Tom Balmforth in MOSCOW and Khanh Vu in HANOI.; Editing by Lincoln Feast