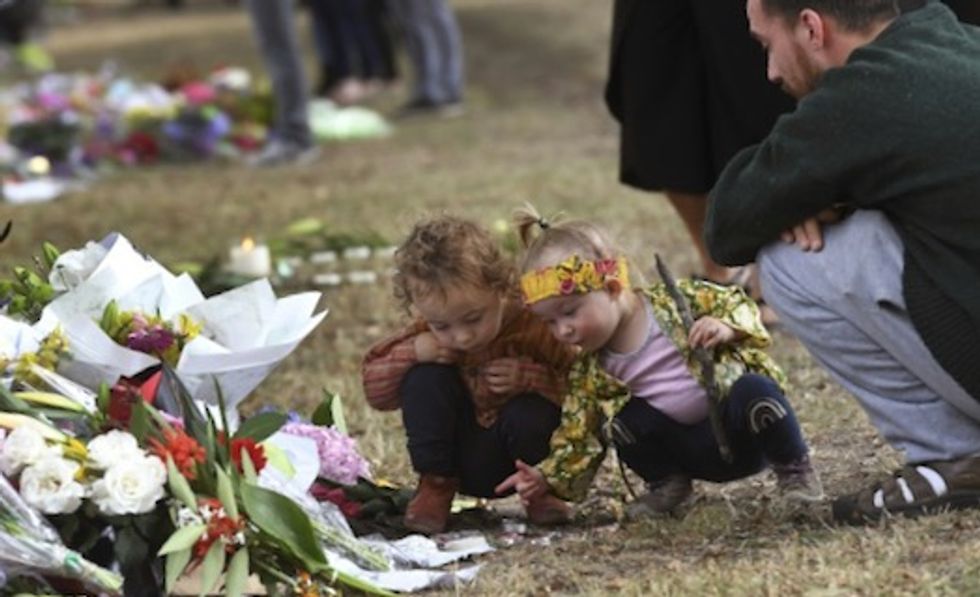 As Tipene Newbery laid a wreath outside Al Noor Mosque -- where dozens of worshippers were massacred by a white supremacist last Friday -- his children called out, "Don't cry daddy!"

Families in the southern New Zealand city have struggled to come to terms with the mental toll of the attacks at two mosques that left 50 people dead Friday, including children, just years after a devastating earthquake killed 185 residents.

At memorial sites across Christchurch, children's heartfelt notes and drawings of young Muslims holding hands or hugging non-Muslims have been particularly poignant.

One drawing of children from different backgrounds holding hands had the words: "You are my friends. I will keep watch while you pray."

Newbery, who was a teenager when the 2011 earthquake struck, admits he was "messed up" by the destruction it caused, and wants to create a more positive environment for his four young children following the shootings.

"This is way worse than the earthquake as far as I'm concerned. Natural disasters are inevitable but this can be prevented," the 26-year-old told AFP at a memorial site outside Al Noor.

"Even though there's a lot of hate inside me, I can't show that in front of them (his children). Just show that peace and love is the only way."

The impact of the shootings stretches from those directly affected, such as children who lost their parents in the attacks, to New Zealanders shocked at how such a violent act could be carried out in their usually peaceful country.

Saleha Hussain travelled from Auckland to support her friend's young daughters aged two and five after their father Suhail Shahid was killed in Al Noor.

Having comforted the older daughter when she woke up in the middle of the night screaming for her father, Hussain told AFP her message to children was for them to not have "fear in their hearts" as they would be protected by God.

Clinical psychologist Sarb Johal, a New Zealand expert in mental health for those coping with disasters, said it was important for parents to monitor what their children were exposed to when they were outside home, in case they were being fed misinformation.

Giving them a sense of hope, to contrast against the shootings, was also key, Johal said.

"We have a duty to make sure that we present a world that isn't torn apart," he told Radio New Zealand.

"This is a terrible, terrible event, a horrific event but in the broader context of things we need to remember that there are many people working... to help assist and protect people going about their everyday lives, so point them out."

Moazzem Hossain, who survived the hail of gunfire at Linwood Mosque and has struggled to sleep since, told AFP he had worked hard to reassure his 16-year-old daughter.

"I tell her to keep mentally strong and to find resilience," he added.

Newbery admits his children's curiosity has been a big challenge, noting that "you don't have a choice with children, they ask the hardest questions".

But he feels that public displays of compassion -- as seen in the growing fields of flower bouquets at makeshift memorial sites in Christchurch -- are a good starting point.

"I think doing stuff like... coming and paying respect, and showing love and compassion and not hatred towards the person who did it, is important," Newbery said.

"I'm devastated but I'm trying not to show too much of that around them (the children)."