'This clearly shows no collusion!': Twitter has a field day with photo of Trump holding up a map 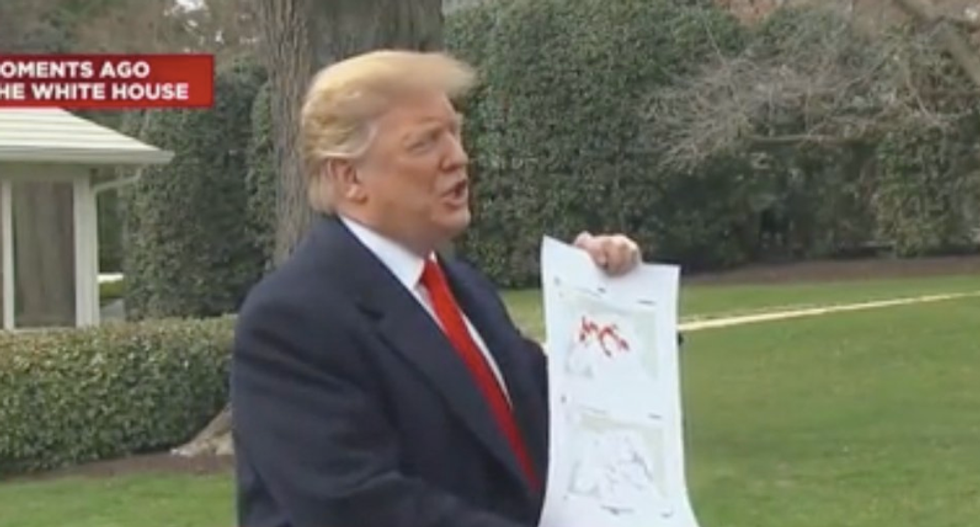 President Donald Trump, trying to convince reporters in Washington, D.C. that the terrorist organization ISIS (Islamic State, Iraq and Syria) has been defeated under his watch, held up two maps of ISIS territories on Wednesday—and the maps have been inspiring a lot of responses on Twitter.

The maps that Trump held up on the White House South Lawn compared ISIS territory on Election Day 2016 to ISIS territory now. The president told reporters, “This was on election night in 2016. Everything red is ISIS. When I took it over, it was a mess. Now, on the bottom, that’s the exact same; there is no red. In fact, there’s actually a tiny spot which will be gone by tonight.”

Some Twitter users made fun of Trump’s display of the maps by photoshopping other photos. Twitter user @ManInTheHoody, for example, photoshopped the Twitter account “Devin Nunes’ Cow”—a parody account pretending to be written from the perspective of a cow owned by Republican Rep. Devin Nunes of California. Instead of holding up two contrasting ISIS maps, Trump is seen holding up the main Twitter page for @DevinCow.

BuzzFeed News’ Toronto-based Elamin Abdelmahmoud posted a photoshopped photo that, instead of the ISIS territory maps, depicted Trump holding up a sign reading, “Kid A is just okay.”

CNN’s Chris Cillizza retweeted a photo of Trump holding up the maps, sarcastically posting that they show “no collusion” (a reference to Special Counsel Robert Mueller’s Russia investigation). And Twitter user Neal Pomea, a specialist in Cajun music, posted that Trump is selective when it comes to military intelligence. Pomea said of the ISIS maps comparison, “He seems to trust his generals and our intelligence when it’s flattering to himself! Otherwise, no.”

Check out some more memes below: