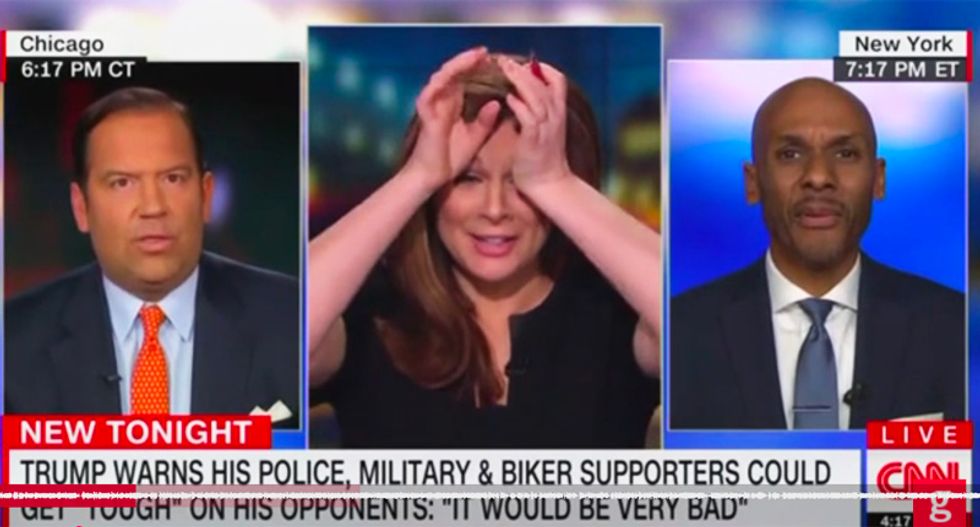 On Thursday, CNN's Erin Burnett almost pulled her hair out after Trump-lover Steve Cortes supported the president's use of unprecedented violence.

In an interview with Breitbart News, Trump warned that his base is "tough" and could act violently towards those who oppose him.

"What do you think he is saying?" Burnett asked.

"I think he's clearly threatening violence or hinting at the possibility of violence," political commentator Keith Boykin said. "It's a part of a pattern that we see from Donald Trump going back to the presidential campaign when he would consistently talk about how he wanted to punch people in the face, tell people to knock the crap out of protesters. He offered to pay their legal bills for people who roughed up protesters."

Cortes then tried to clarify what Trump meant, however, he epically failed and Burnett was undone.

"I think it's important here to be very precise in terms of what the president actually said," Cortes said. "He did not in any way infer or say he was going to use the military, meaning in an official capacity or the police in any way."

Burnett then interrupted in disbelief at what Cortes was saying.

"Are we seriously talking about having the military in a violent confrontation with the left in this country?" she asked

Cortes then choked up on his word, right before Boykin hammered him.

"We have never had a president like this before who's encouraged violence. The president of the United States has encouraged this type of behavior or at least hinted at it. When violent people were actually marching with tiki torches in Charlottesville the president said they were 'very fine people.' This is a guy who has a history of stoking the flames of violence."