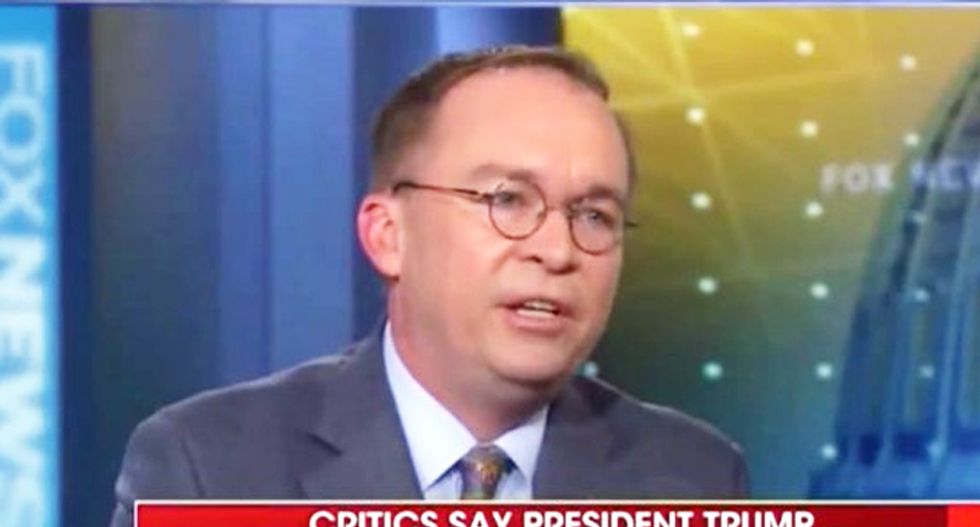 CNN's Abby Phillip on Monday was unimpressed with acting White House Chief of Staff Mick Mulvaney, reporting that his laughter during a Sunday interview on Fox News, in which he defended President Donald Trump from accusations that he's a white supremacist, revealed ugly truths about the president.

"You almost hear Mick Mulvaney having to laugh through the incredulity that is having to re-affirm that this president isn't a white supremacist," said host Brooke Baldwin, running a clip of the chief of staff chuckling through a difficult question about Trump's attitudes.

"If only this were something actually funny, but it really isn't. It's about something that's incredibly serious," replied Phillip. "That moment was really extraordinary. I don't think we've ever heard a top White House aide having to insist that a president is not a white supremacist."

"He was actually asked why the president wouldn't say more about the ideology that was behind this attack in New Zealand," she continued, charging that Mulvaney was dodging the real issue -- the ideology that tied the Christchurch shooting to Charlottesville and other hate-drive attacks. "The question was why won't President Trump deliver a speech about religious tolerance toward Muslims about the white supremacist ideology behind these sorts of attacks."

"The White House really won't answer that, and they won't answer why President Trump hasn't talked about this on his Twitter feed, even as he has offered his condolences to New Zealand," Phillip went on, comparing Trump unfavorably to other US presidents. "Even though this attack didn't happen on American soil, it's something that has resonance here because there have been moments, particularly in this president's presidency, where these ideologies have cropped up, they've become an issue."

She added that even as she spoke, Trump was trying to deflect, after sitting through a service Sunday in which the pastor urged the congregation to reject hatred.

"This morning however, President Trump blamed the media for blaming him for the New Zealand attack," she said. "So this has really come back full circle to where we always end up, which is attacks on the media but not really addressing the substance of the issue."