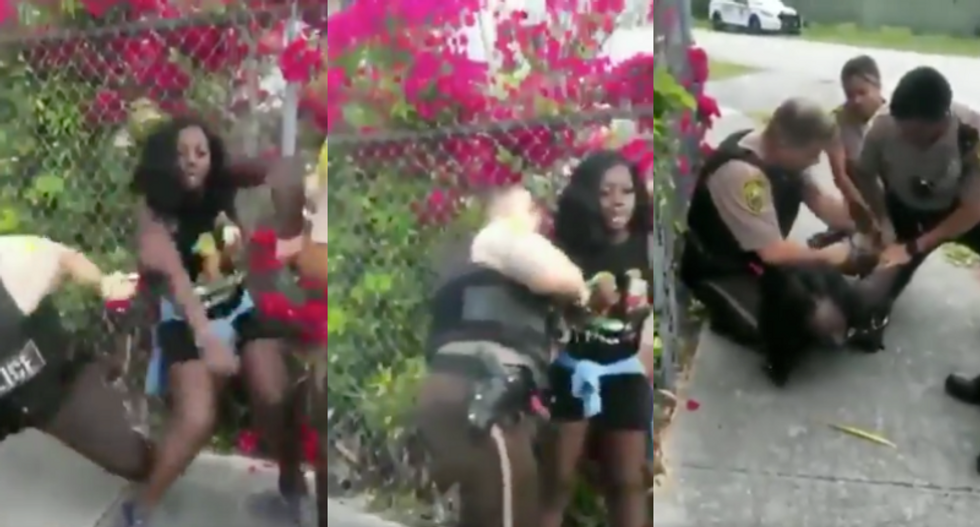 New video shows Miami-Dade police violently arresting a black woman who had called them for help after someone pulled a gun on her.

The Miami New Times reported that the context surrounding the viral video remains unclear — and that the Miami-Dade Police Department fired the "field training officer" who appeared to initiate the incident.

The video begins with someone off-camera requesting that officers "please calm down." In response, one of the MPD officers said the woman "needs to be corrected."

"Why do I have to be corrected when my life and my daughter's life was just threatened?" the distraught woman asked.

An officer grabs the woman's wrists while another handcuffs her, and as the report noted, one of the officers put her in a headlock although she does not appear to be physically resisting. At least five officers appeared to be involved.

"Please stop!" a bystander said. As the video went on, officers continued to ignore the pleas of the people around the arrest.

"An investigation into the entire incident is currently ongoing and upon its conclusion I will hold those that violated any of our policies and/or procedures accountable for their actions or lack thereof," MDP Director Juan Perez wrote in a statement on Twitter."

An investigation into the entire incident is currently ongoing and upon its conclusion, I will hold those that viol… https://t.co/NT1fvv4fr4
— Juan Perez (@Juan Perez) 1552534519.0