'I don't get it': Trump unleashes angry and confused rant attacking Mueller from the White House lawn 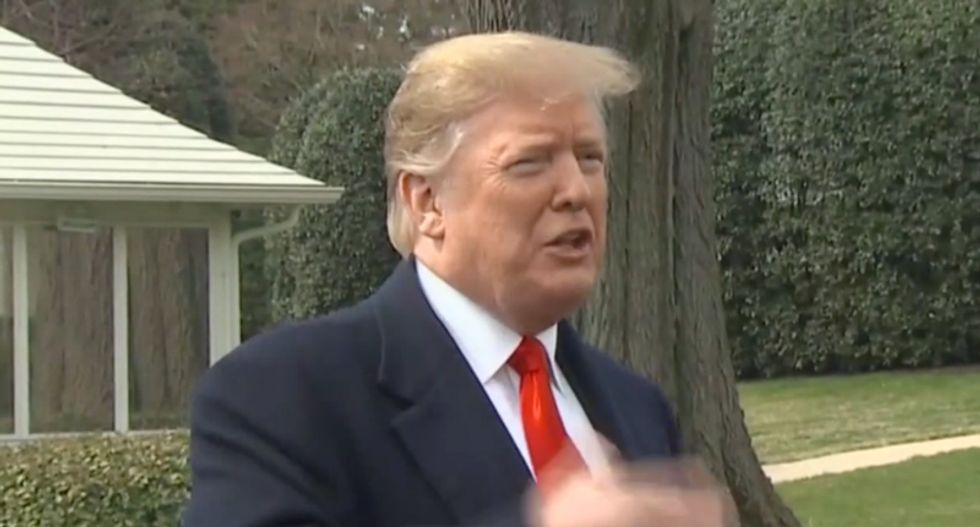 President Donald Trump delivered an angry, unhinged, and incoherent rant attacking Robert Mueller on Wednesday from the White House lawn, alluding repeatedly to his 2016 presidential victory, telegraphing an attack on ISIS, and his strength in Ohio.

"I had the greatest electoral victory in the history in the country, tremendous success," Trump added. "Tens of millions of voters and now somebody's going to write a report who never got a vote. We'll see what the report says. Let's see if it's fair. I have no idea when it's going to be released."

"This was on election night in 2016, everything red is ISIS," said Trump in response to a reporter's question, pointing to a map. "Now on the bottom, that's the exact same, there is no red. In fact, there's actually a tiny spot which will be gone by tonight." Trump said he'd received the map twenty minutes prior to his appearance, and returned to the topic of the Mueller probe.

"I just won an election with 63 million votes or so, 63 million. I had 206 to 223 in the electoral college, 306 to 223, and I'm saying to myself, 'wait a minute, I just won one of the greatest elections of all time in the history of this country,' and even you will admit that and now I have someone writing a report that never got a vote?" Trump said. "It's called the Mueller report. So explain that because my voters don't get it, and I don't get it."

"I think it's ridiculous, but I want to see the report, and you know who wants to see it? Tens of millions of people that love the fact that we have the greatest economy we've ever had," Trump went on. "I'm going to Ohio right now and they're going to close the plant and it's where they make the tanks and it was going to be closed and I stopped them from closing it and now it's thriving and doing great, and the people of Ohio, they like Trump because I've done a great job in Ohio and I've done a great job all over the country and that's what the people want to hear."