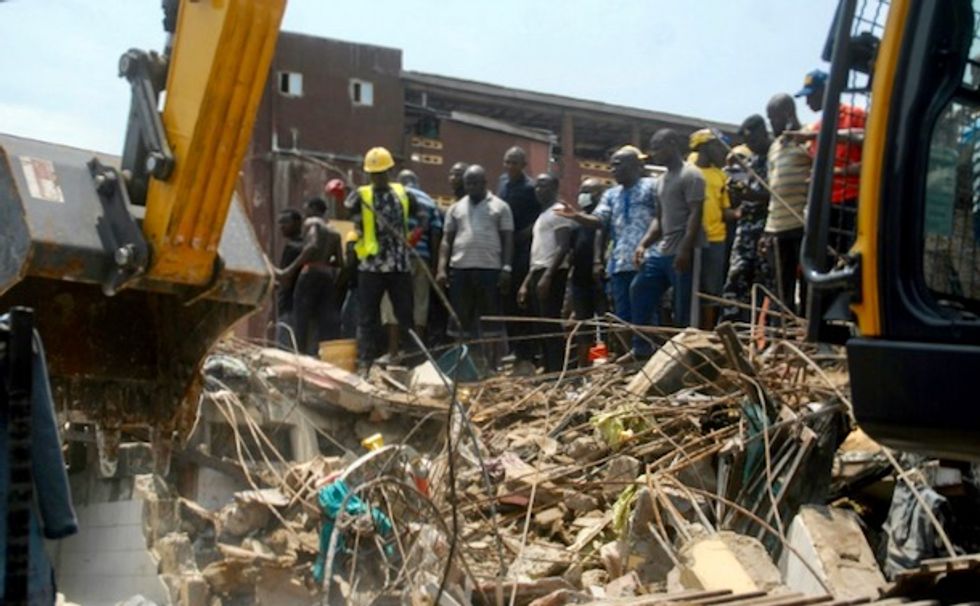 Dozens of children were among scores of people feared trapped on Wednesday after a four-storey building collapsed in Nigeria's economic capital Lagos, rescuers told AFP, with at least four dead bodies pulled from the rubble.

The children were attending an "illegal school" inside the residential building when the structure collapsed, officials said.

"Dozens of children were trapped inside," said Adesina Tiamiyu, head of Lagos state emergency management agency (SEMA), which is supervising the rescue operation.

So far, emergency workers had pulled 40 people alive from the rubble, some of them badly injured, he said.

But they had also recovered "more than four dead bodies", Tiamiyu said without giving an exact figure.

Police said they believed scores of people were trapped under the rubble of the building which collapsed mid-morning in an area near Itafaji market on Lagos Island.

"We are getting additional cranes to be able to go deeper than where we are now to rescue more lives," said Lagos state governor Akinwunmi Ambode in a statement.

And he promised a full investigation, pledging there would be "punishment" for anyone found responsible for the building's collapse.

It was not immediately clear how many people were inside when the building foundered.

Rescuers stressed there were no exact figures for the dead or injured, but one health official said 20 people had been taken to hospital.

"We are still trying to find out how many are trapped inside," said police officer Seun Ariwyo, who said there were probably scores.

A young man helping rescue efforts who gave his name only as Derin said "at least 10 children" were trapped inside but "thought to be alive".

An AFP reporter at the scene saw at least eight people pulled from the wreckage, including a small boy with blood on his face.

Covered in dust, he was alive but unconscious and appeared to be badly hurt.

One local resident who witnessed the moment of collapse said there was no warning.

"We were smoking outside when the building just collapsed," Olamide Nuzbah told AFP in pidgin English.

As rescuers worked furiously to reach those inside, distraught parents begged them to find their children.

"Please, save my child, save my child!" wept one traumatised mother whose seven-year-old daughter was trapped inside, as people tried to console her.

School bags, toys and clothes could be seen among the piles of rubble as a bulldozer tried to clear a path through some of the wreckage to help the rescue efforts.

As the day wore on, an AFP correspondent saw several children being brought out, at least one of whom appeared to be dead.

Elsewhere, hundreds of local residents tried to help, passing water and helmets through to dust-covered rescuers working tirelessly to sift through the rubble, some of whom appeared to be distressed.

Many locals told AFP that the building, which was in an advanced state of disrepair, had been "earmarked" for demolition by the authorities in Lagos state.

"It is a residential building that was actually accommodating an illegal school," said Ambode, the state governor, confirming that most buildings in the area had been marked for demolition but saying some landlords had defied the move.

"We get resistance from landlords but we must continue to save lives," he said, pledging to step up measures against all structures that failed to meet the correct standards, saying they would be "quickly evacuated" and demolished.

Lagos, which has a population of 20 million people, is made up of a collection of islands.

AFP / SEGUN OGUNFEYITIMI The incident took place near Itafaji market on Lagos Island, a densely-populated area which is one of the city's oldest neighbourhoods

One of them is Lagos Island, a densely-populated area which is one of the city's oldest neighbourhoods.

It is characterised by its Afro-Brazilian architecture, a style brought over by thousands of freed slaves who headed back home after decades working the plantations in Brazil.

Despite efforts to renovate the area, a large number of abandoned buildings have been taken over by families or businesses, despite being dilapidated and unsafe.

Building collapses are tragically common in Nigeria, where building regulations are routinely flouted.

In September 2014, 116 people died -- 84 of them South Africans -- when a six-storey building collapsed in Lagos where a celebrity televangelist was preaching.

An inquiry found it had structural flaws and had been built illegally.

And two years later, at least 60 people were killed when the roof collapsed at a church in Uyo, the capital of Akwa Ibom state, in the east of the country.