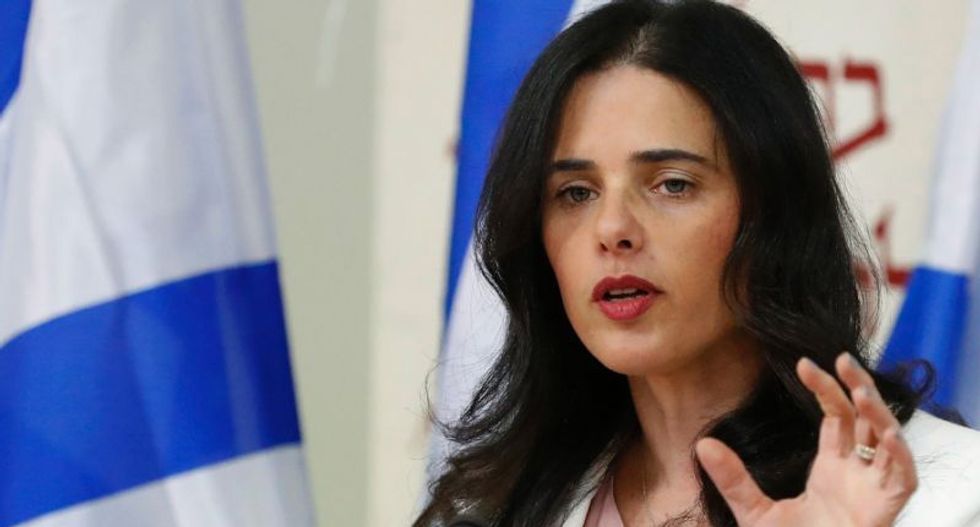 A new ad with an elegantly dressed minister using "fascist" perfume drew online outrage Tuesday, the latest in a social media war ahead of an Israeli election that has also featured a flatulent hippo.

Israeli law prevents political ads from being aired on television until two weeks before the April 9 election, so parties have flooded social media with clips instead.

The elections are expected to be close and social media is playing a part in the campaign as never before.

Messaging tool WhatsApp is particularly popular among Israelis and makes sharing clips easy, though Facebook and Twitter are also unavoidable in the self-proclaimed "start-up nation," known for its hi-tech prowess.

"There's very heavy use of the internet in campaigning, but it's a wild west," said Tehilla Shwartz Altshuler of the Israel Democracy Institute think-tank. "There's no regulation."

In keeping with Israel's seldom subtle political scene, many clips have been over the top, and the one released late on Monday featuring Justice Minister Ayelet Shaked pushed lots of buttons.

The ad, viewed hundreds of thousands of times on social media, tries to play on accusations from her critics that Shaked has pursued a fascist-like agenda and argues that her policies are in fact more democratic.

Supporters registered approval, but many comments judged the ad, which mimics an advert for a pricey perfume, as a failure that could be mistaken for an endorsement of fascism.

"For anyone who doesn't know that the left often accuses Shaked of fascism, this ad will sound like she's endorsing fascism and calling it democracy," Eylon Levy of Israel's i24 news channel posted on Twitter.

Opinion polls show Shaked's far-right New Right party not performing as well in the election as had earlier been projected, and the aim seemed to be to recapture the public's attention.

It certainly succeeded in doing so, though it perhaps backfired.

As dramatic piano music plays, Shaked saunters and poses while a narrator lists the virtues of a perfume called "Fascism".

The qualities listed include Shaked's stated goals such as reducing what she calls judges' activism.

After spraying herself with "Fascism," Shaked turns her gaze to the camera and says: "Smells like democracy to me."

Political parties are trying to break through the noise with eye-catching videos and hard-hitting claims about their opponents.

Prime Minister Benjamin Netanyahu and his right-wing Likud have been among them, creating an online television channel and churning out regular videos denouncing his main opponent, former military chief Benny Gantz.

Gantz's Blue and White alliance has responded in kind.

Smaller parties have sought to differentiate themselves.

Particularly shocking was a clip posted on Facebook by Oren Hazan, a Likud lawmaker in the outgoing parliament known for provocative comments and behaviour.

Hazan, now running independently after failing to get a Likud slot for the April election, is seen playing a scene in a classic western movie where from his bathtub he shoots an intruder with the face of Arab MP Jamal Zahalka.

The post is titled "The Good the Bad and Zahalka."

Zahalka is chairman of the Raam-Balad party, which is fiercely critical of Israeli policies, particularly the occupation of Palestinian territory.

A spokeswoman told AFP he had filed a police complaint accusing Hazan of incitement to murder.

Finance Minister Moshe Kahlon's centre-right Kulanu, which is struggling in opinion polls, last week released a video designed as a trailer for a movie.

It featured a fish climbing a tree and a flatulent hippopotamus, with the message being that only Kahlon, the "sane right", cares about social issues.

The animals were meant to symbolise all the distractions from real issues Israeli voters are facing in the campaign.

The extreme-right Jewish Power party, which many Israelis view as racist, has distributed a video showing a soldier hesitating to shoot a Palestinian attacker out of fear of prosecution.

One of the party's leaders, Itamar Ben-Gvir, emerges and tells the soldier to "shoot him, it’s self-defence!"

The head of the party, Michael Ben-Ari, has since been disqualified from the election by the supreme court for statements that the attorney general called incitement to racism.

Netanyahu and Gantz have been duking it out over who is best-suited to guarantee Israel's security.

One video from Gantz's campaign boasted of the number of Palestinian militants killed and targets destroyed under his command in a 2014 war with Gaza's Islamist rulers, Hamas.

Not to be outdone, one from Likud warned against voting for Gantz because it would lead to "more violence," and included images of sites of attacks against Israelis as well as a shot of a military cemetery.

After widespread criticism over it, Netanyahu said the video had been a mistake.