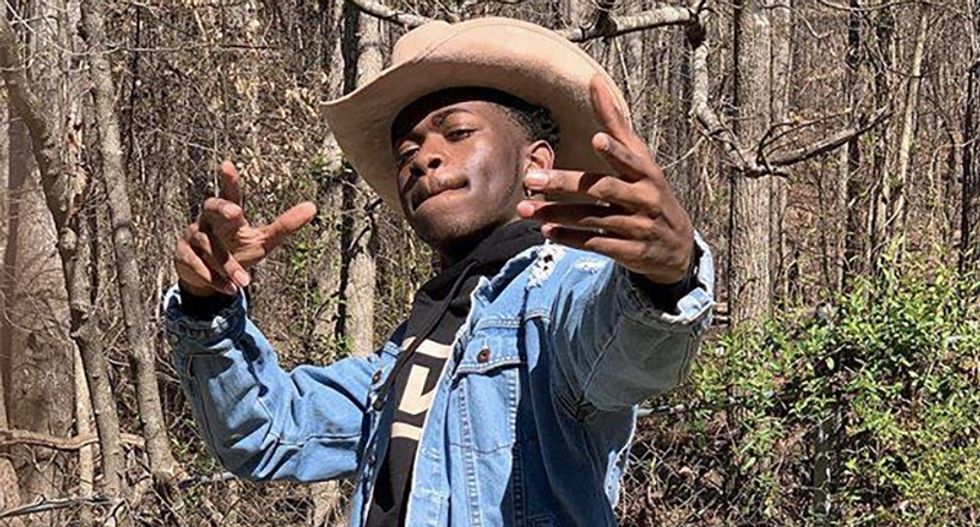 Country music star Lil Nas X was barred from the country music charts this week, despite his music fitting into the genre.

The song, "Old Town Road" was gaining traction after it went viral on TikTok app. It's has clear undertones heard in country music but with the twist of a little hip-hop. While country music has been friendly to mash-ups in the past, it seems to be isolated to attractive, white female artists like Shania Twain or the Dixie Chicks.

A former country music record executive that has since moved on to another genre spoke out on Twitter Sunday to confirm that racism does run through the industry.

"If you know me, you know I once worked for a large country music label in Nashville. (The largest, actually.) I won't name them here, because I don't like when lawyers call me," tweeted Shane Morris. "Was the label populated *mostly* with racists? No. But were there a lot of racists? Yes."

Those in charge at Billboard justified the ban by saying that "Old Town Road" doesn't have enough country elements to be on the Billboard Country charts. Morris cited "GIRL" by Maren Morris, which he said also has no business on the country music rankings.

"I love 'GIRL' by Maren Morris. But it is, objectively speaking, a pop song," he explained.

"Girl" has been in the top 20 Country Music Billboard charts for ten straight weeks since it debuted.

Morris also compared it to Kacey Musgraves, whose music has pop elements but throws in enough banjo or twang to satisfy the folks at Billboard.

He went on to compare it to Ray Charles, who Morris said white people heard and thought, "What if we did what he was doing, but made it shittier, and whiter?" It was then, he said, that "modern country music was born."

Lil Nas X is using sounds from within country music while making it better, just like Ray Charles in 1962.

He said that there has always been a "rift" between people of color and the country music world. When Charles reached the top of the pop charts again in 1963 with his version of "You Are My Sunshine," which country music thought of as their own.

"Country legends like Gene Autry and Bing Crosby had previously recorded versions of 'You Are My Sunshine' -- but Ray Charles, his version had energy, jazz, soul and the power of a black church," he continued. This was 1963. The year after President Johnson banned housing discrimination."

Just four black men have ever reached the top of Billboard's Country Charts, Darius Rucker, Kane Brown, Jamie Allen and last week Lil Nas X. Only one of those men has ever been removed, however. (Critics of Morris' commentary have disputed it because he left out Charlie Pride. With Pride that makes five black meh who reached the top of the charts).

He cited singer/songwriter Kane Brown, who has tweeted in the past about racism in Nashville. One tweet alleged people wouldn't write with him because he's Black, but he later deleted it.

"Why delete it? Politics. Kane Brown is on tenuous footing as a black man in a racist industry," Morris said. "Go to any writer's round in Nashville, at legendary places like The Bluebird Cafe, and you'll see a diverse array of people with all skin colors, from paper and ivory, to papyrus and cream. Nashville's country music scene is welcome to Caucasians from all backgrounds."

But by pulling Lil Nas X from the charts, Morris said that the mafia-like powers are not protecting the sound of country, but the "look" of country music.

"Because this isn't about sound. At all," he said. "Billboard Country had no problem with Taylor Swift tracking pop tunes onto their Country chart. Sam Hunt has been using autotune and rap beats for a long time. Dan + Shay make pop music and if you disagree, you are wrong. But they're all 'Country.' Lil Nas X made a song that is country enough to be country, and trap enough to be trap. That should be something we celebrate, as an unknown artist rode a TikTok meme to fame, and brought two audiences together. Instead, Billboard was like, 'Nah, let's be racist as f*ck.'"

Morris now works for a different record company but still lives in Nashville.