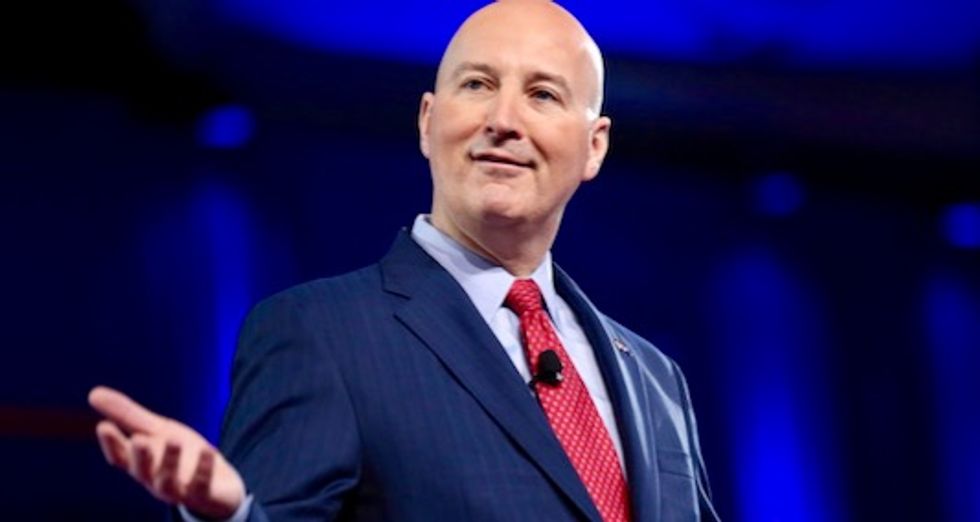 Said 'Gays Are Scum of the Earth'

Nebraska GOP Governor Pete Ricketts' re-election campaign statewide field director Bennett Bressman reportedly has made thousands of posts on Discord, a social media platform popular with the alt-right. Among his remarks are a "shocking trove" of homophobic, racist, and anti-Semitic remarks, as Talking Points Memo reports.

Ricketts on Monday said he was "shocked and horrified" this key member of his re-election team held such offensive beliefs.

"The posts by Bressman, as reported by the website Anti-Fascist Nebraska, joked about the Holocaust and turning Israel into 'a crater,' as well as posts that stated 'gays are scum of the earth' and that he 'probably would' drive his car into a Black Lives Matter crowd for the 'lulz' (laughs)," the Omaha World Herald reports.

According to Anti-Fascist Nebraska, he also made what appears to be a reference to hate violence directed at LGBT people: "frag grenades at fag parades all summer 2018."

"Frag," according to Google, is "military slang" that means to "deliberately kill (an unpopular senior officer) with a hand grenade." Presumably it could have other meanings.

Anti-Fascist Nebraska pooled and characterized sets of Bressman's remarks, such as, "Bressman’s casual endorsements of genocide," and "Bressman confesses to committing a hate crime at an LGBT rally for which he was never held responsible, and says he would do it again."

In one June 2018 post Bressman writes, "I had brunch with my governor today and he was telling me how the trump [sic] administration is truly transformational in ways people don't even know."

Anti-Fascist Nebraska, which includes dozens of screenshots in its article, notes that "it should be disturbing that a governor is having private brunches with 21 year old fascists and is one of 50 governors advising the president on policy."

TPM adds that "the trove of chats remains searchable on Unicorn Riot’s page. In them, Bressman expresses his allegiance to white nationalist ideology, claiming that 'the white race is dying' and sharing memes about 'becoming a fascist' as a result of his 'research.' Bressman explicitly encourages his fellow travelers to seek posts in local government and 'take this whole apparatus over.'"

Gov. Ricketts' father is billionaire TDAmeritrade founder Joe Ricketts, for whom the Nebraska governor was forced to apologize for after news broke the elder Ricketts had been sending racist conspiracy theory emails.