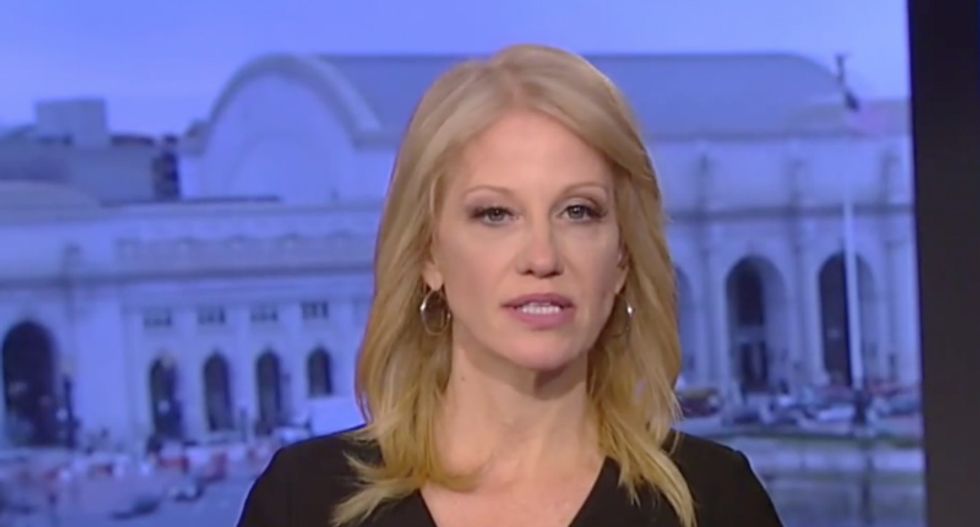 President Donald Trump's counselor Kellyanne Conway went on the Fox Business Network on Thursday and publicly trashed her own husband, conservative lawyer George Conway, after he went after her boss again on Twitter.

"My husband also has been very critical of the president publicly, which is unlike him just because he's traditionally been a very private person," Conway said. "In 2016, which was known as year of the tweet, George Conway sent exactly zero tweets. So this is new."

"Also what is new is not supporting the agenda of the president and my work there," she added. "Because when George took himself out of contention for a top job in the Department of Justice, almost two years ago now, he put out a public statement that many in the media refuse to cover now, which is we've decide as a family it's not the right time for both of us to have big jobs in the federal government. Her husband, she continued, also agreed that while he'd "stay in the private sector" he would continue to support "the president, the work of the administration, and of course his quote wonderful wife."

Conway, however, indicated that she was disappointed with her husband's activities.

"I was raised though in a household of strong Italian Catholic women who taught me that you air grievances like that in private, so it is very surprising to see it be so public," she said, and continued to publicly air her grievances with her spouse.

"George decided he would like to do something different with his career, I totally supported that," she said. "He wanted the Solicitor General job, that didn't work out. Then he was nominated or offered the job at Justice Department. I've always encouraged him, I think would he be a fantastic judge or law professor."

"But again, I don't talk much about this publicly," Conway said, out of concern for her children. "I prefer not to address it, and if that means people are mischaracterizing me or my boss, or even George's tweets -- "

"Does your husband know that? You say these grievances should be discussed in private, and yet he's out tweeting," broke in host Maria Bartiromo. "What does your husband say when you say 'George let's leave this private, not go on Twitter.'"

"You can ask George that, but I certainly have had this conversation," Conway replied. "George is not Bob Mueller, he's not [CNN reporter John] Berman, he's not Rod Rosenstein. He can't act on those tweets in a way."

"I don't know when the feminists are going to write this story about the unusual situation of a man getting power through his wife," she added in a bizarre tangent. "But that's what we have here."