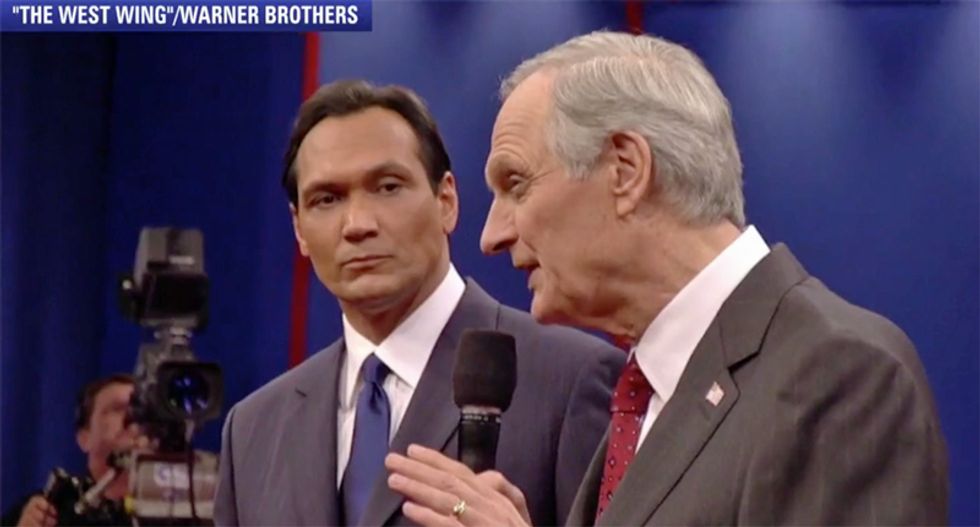 MSNBC anchor Lawrence O'Donnell played a clip from the award-winning television show "The West Wing" on MSNBC's "The Last Word" to illustrate the political strategy he believes Democrats will need to beat President Donald Trump in 2020.

O'Donnell then explained how that exchange reminded him of a scene from "The West Wing."

The clip was from the season seven episode "The Debate" where Jimmy Smits portrays Matt Santos in a presidential debate against Arnold Vinick, played by Alan Alda.

The episode is one of sixteen "West Wing" episodes O'Donnell wrote.

In it, the fictional Democratic Party nominee offers a vigorous defense of being a liberal.

"When Donald Trump throws the word socialism at the Democratic presidential candidate on the debate stage, that candidate cannot hide, cannot duck cannot run away from that word," O'Donnell noted.

"That candidate has to tell the audience that's what Republicans said about Social Security when they opposed it in 1935 and that's what Republicans said about Medicare when they opposed it in 1965," he continued. "And it's true that those are socialistic programs. but they're programs that work well and make millions of people's lives much better."

"The Democratic candidate is going to have to be brave enough to honestly talk about socialism to that national TV audience and tell them that there is good socialism -- like Social Security and Medicare -- and there is very, very bad socialism," he said.

"And the worst socialism in America is Trump-golf socialism -- Donald Trump's socialism," he concluded.